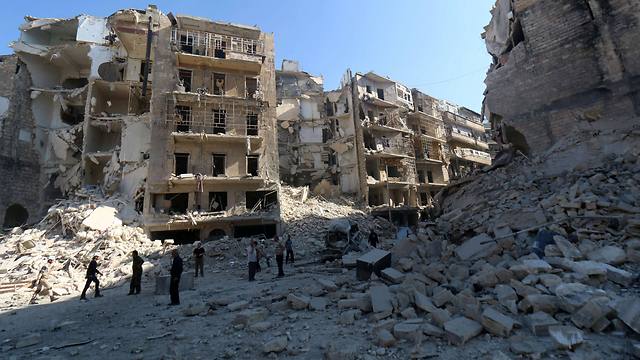 On Saturday Secretary Kerry participated in what he described as a 9-nation “brainstorming session” on Syria, which included Russian FM Lavrov and Iranian FM Zarif, which did not produce any agreement [a]. On Sunday he met bilaterally with U.K. FM Johnson, and said that American options on Syria are limited because of weak international support for military action, and so the U.S. and U.K. may pursue sanctions: “I haven’t seen a big appetite in Europe of people to go to war.. So we are pursuing diplomacy because those are the tools that we have… We are considering additional sanctions… President Obama has not taken any options off the table” [b].

In Europe, EU foreign ministers are meeting in Luxembourg today to work on potential sanctions in response to the ongoing rubbling of Aleppo [c].

The bill, guided by House Foreign Affairs Committee ranking Democrat Eliot Engel (N.Y.), would also sanction entities that aid the Syrian government in these atrocities; that includes Russia and Iran… Now the White House has told members and staffers that the bill’s sanctions on Iran could violate the nuclear agreement the Obama administration struck with Tehran last year and the Russia sanctions could hurt any future efforts to work with Moscow diplomatically on Syria.

Last week the Associated Press revealed that the administration’s Iran concerns go beyond the technicalities of the nuclear deal: they’re worried that any action against Iran would give the Iranians an excuse to pocket the concessions and walk away [e]:

While the Russia talks have collapsed, the administration maintains concerns about the sanctions might also hurt Iran, another Assad supporter, giving Tehran an excuse to renege on the U.S.-brokered nuclear deal. The administration also demanded that lawmakers strip out mandatory requirements so that Obama can waive sanctions at his discretion, congressional aides said.

Either assessment – that the nuclear deal prohibits non-nuclear sanctions or that it prevents the U.S. from taking action against Iranian aggression more generally – would be in tension with explicit administration commitments to Congress about constraining Iran.