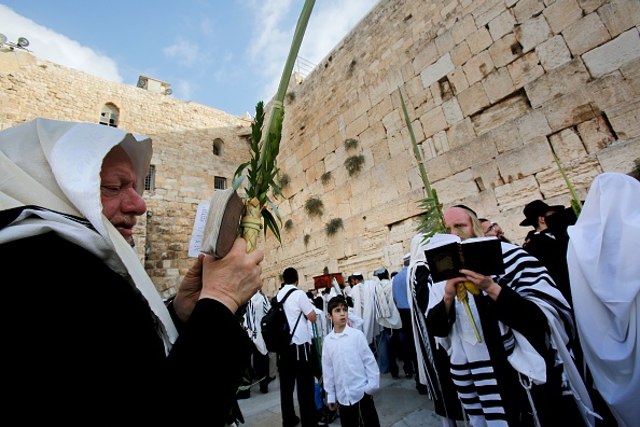 When UNESCO came out with one of the most venomously anti-Semitic resolutions in recent history, claiming no relation between Jews and Temple Mount in Jerusalem, it should have been déjà vu for the Hindus. To deny the connection of Temple Mount and Judaism is to negate the very existence of Jews as a spiritual nation.

It is the same feeling of pain when some academics tried to remove the word ‘India’ and ‘Hinduism’ from the school textbooks; the same feeling of betrayal when The Archaeological Survey of India (ASI) under the UPA claimed in the court that there were no ‘historical records to incontrovertibly prove the existence of the characters or the occurrence of the event’ described in Ramayana; the same feeling of anguish when an academic mafia of Stalinist kind indulged in a false propaganda questioning the very connection of Ram to Ayodhya.

As 24 nations voted in support of this resolution that insulted the collective intelligence of all humanity, Israeli Prime Minister rightly called the entire proceedings ‘theatre of the absurd’. Only six nations voted against the resolution. However, there are certain significant changes which some discerning eyes in the media have noted. Outgoing Foreign Ministry director- general of Israel Dore Gold had noted that the majority of the nations have either abstained or voted in favour of Israel than voting against Israel. He specifically noted that India has changed its stand from its traditional position of abstaining from voting. For an average Indian, it’s heartening to see that India has been steadily moving away from its Nehruvian vote-bank based myopic stand, though not animated by anti-Semitism per se always favoured anti-Semitic forces in UN.

This is the first time India is reversing its earlier stand to one more supportive of Israel. For example, India which had voted in 1975 favouring a UN General Assembly resolution (No.3379) equating Zionism with racism, reversed its stand and voted for repealing the same resolution in 1991. Of course, these are small steps, given the possibilities of lost decades. Yet it is a good start for India.

A strong schizophrenic element had characterised India’s Israeli policy. Nehru started this duplicity when he sought Israeli assistance in agricultural technologies barely a few months after voting against Israel in the United Nations. David Ben Gurion critically observed that the high moral principles advocated by Gandhi and Nehru were never applied to India’s Israel policy. In private conversations high profile Indian diplomats, even of Nehruvian vintage, acknowledged India’s need for recognition and close cooperation with Israel. Prof P R Kumaraswamy (International Studies, Jawaharlal Nehru University) points out that Sardar K M Panikkar, India’s first ambassador to China, felt that India should become ‘more sympathetic toward Zionist aspirations in Palestine and even lamented India’s belated recognition of Isarel’ and yet in his published autobiography he had to sing ‘a different tune and joined the official chorus against the formation of Israel’. Even Krishna Menon thought that India should have established ambassador level diplomatic relations with Israel soon after its recognition. (P R Kumaraswamy, India’s Israel Policy, Columbia University Press, 2010)

Despite the artificial hostile-to-Israel foreign policy imposed on India by Nehruvians, history has made India and Israel share mutual moral and spiritual obligations. Despite all his posturing against Israel and his prioritised frenzy with projecting India as China’s international propaganda satellite, Nehru had to write letters to David Ben Gurion seeking military assistance against the Marxist aggressor in 1962. David Ben Gurion obliged. Lal Bahadur Shastri was also not averse to getting Israeli help during the 1965 war. During the Six-day war in 1967 Indira Gandhi had not moved decisively left and was probably following Shastri’s policies. India helped Israel with ‘badly needed spare parts for Israeli Mystere and Ouragan fighter aircraft and the AMX-13 tanks’. (Prithvi Ram Mudiam, Indian Power Projection in the Greater Middle East: Tools and Objectives, 2007)

In 1971 when the US and its allies were supporting a genocidal Pakistani regime and enforcing a ban on selling arms to India, it was a Polish Jew and an Auschwitz survivor who came to the rescue of India. During the virtual arms embargo against India, P N Haskar the ace Nehruvian, who would have rejoiced every time India voted against Israel in UN, had to turn to a Jew for help. The Jew was Shloma Zabludowicz – an industrialist and ‘an important architect of Israel’s armaments industry’. Zabludowicz went out of the way and talked to the Israeli government. Srinath Raghavan in his book 1971 A global History of the creation of Bangladesh(2013) writes:

Zabludowicz had already spoken to the Israeli government and was ‘hopeful of airlifting ammunitions and mortars in September’. He also agreed to send Israeli instructors with the first lot. Zabludowicz did more than he had promised. He not only diverted the weapons produced for Iran to India, but also prevailed upon Tel Aviv to release additional quantities from the Israeli defence force’s stocks. In fact, Israeli Prime Minister Gold Meir was eager to accede to Indira Gandhi’s request. After the consignment was airlifted to India, she asked Zabludowicz “to inform the Prime Minister, Mrs Indira Gandhi that we believe she will know how to appreciate our help at a time when they were in difficulties in the past and our complying with their approach now”. A copy of Golda Meir’s letter, duly translated into English by the Israeli consular in Helsinki, reached Indira Gandhi’s desk in the last week of September. But Prime Minister Meir’s hint about establishing diplomatic relations as a quid pro quo was politely ignored.

As India frees herself from the Nehruvian stranglehold on her foreign policies, in the domestic front, Prime Minister Narendra Modi pointed out that the surgical strikes carried out by Indian armed forces place them in league with the Israeli forces, legendary for their daredevil acts.

Predictably Pavlovian, the barons of old media establishment decried the comparison. India born American leftist journalist Siddharth Varadarajan in his article criticising Modi’s comparison claimed that “the vast majority of Indians believe India should stand with the Palestinians in their just struggle”. Nothing can be further away from reality. As a test one can go to any tea shop in any part of India, except perhaps those zones where radicalised Islamists stalk, and start a conversation about the topic of terrorism. Five minutes into the conversation you will find Indians, irrespective of their religion or language, appreciate and admire Israel’s bold stands on terrorism.

Varadarajan then unleashes the Kashmir bugbear. India standing with Israel would make the Islamic world compare the Kashmir problem with the Palestinian problem. This is the most deceitful argument put forth by the old media even as it should know that the ground reality is ironically different. In reality, decades of Indian support to Palestinians never once resulted in unqualified support for India in the Kashmir issue from the so-called Palestinian organisations. We would be living in a fool’s paradise if we continue to believe that by supporting the so-called Palestinians we could gather Arab support for Kashmir. No Arab country condemned either the 1971 genocide of Bengalis by Pakistan or the 1988 ethnic cleansing of Hindus from Kashmir.

Yasser Arafat did not hesitate to attend the Islamic Summit conference organised by Pakistan in 1974, despite his cordial relations with Indira Gandhi. He was also reportedly jubilant about the ‘Islamic nuclear bomb’ of Pakistan. Such consistent non-reciprocal gestures have frustrated sensible Indians. This was revealed soon after India established full diplomatic relations with Israel in January of 1993, by none other than J N Dixit, then foreign secretary of India. He bluntly asked, “What have the Arabs given us, if I may ask? Did they vote for us in the Kashmir issue? Were they supportive of us when we had the East Pakistan crisis?” (Kumaraswamy, P R “Israel-India Relations: Seeking Balance and Realism,” Israel Affairs, Autumn/Winter 2004)

Worse, the so-called Palestinian jihadists have used Pakistan-Occupied Kashmir (PoK) for terrorist training against Israel and pro-Palestinian propaganda nodes in various nations including the US also import jihadists to fight jihad in Kashmir. For example, Nabil Awqil who provided logistics for the notorious ‘shoe bomber’ in Israel, was originally trained in PoK. Council on American-Islamic Relations (CAIR), a supposedly non-fundamentalist organisation for promoting a ‘positive image of Islam in the US’ was co-funded by Omar Ahmed who also co-founded Islamic Association for Palestine. Not only that the organisation often takes a pro-Hamas pro-Hezbollah stands, its employee Randall Ismail was indicted in 2003 for his role in a US-based jihad network that visited and supported terrorist camps in Pakistan which trained jihadists to fight in Kashmir. (Matthew Levitt & Dennis Ross, Hamas: Politics, Charity, and Terrorism in the Service of Jihad, Yale University Press, 2007) Islamist missionary organisations like Tablighi Jamaat, working in US had recruited and indoctrinated African-Americans and had them sent for Jihad in Kashmir. (For a detailed study see Alex Alexiev, Tablighi Jamaat: Jihad’s Stealthy Legions, Middle East Quarterly Winter 2005, pp. 3-11) So essentially, India’s perceived closeness with Israel does make no difference in the clash of civilisations unleashed by jihadist forces against the Hindus and Jews.

Whatever cuckoo land India’s old media barons prefer to live in, Israeli commando operations like the one in Entebbe have set the standards for the expected state response to terrorism in common men and women. If the old media feels perturbed by Prime Minister’s eulogising of Indian military surgical strikes drawing parallel with the legendary prowess of Israeli military, then there is another comparison with Israel to which their attention should be drawn. A visiting missile technologist from India to Israel praised Israeli media for providing positive, spirit lifting news of the accomplishments of Israeli common citizens against the backdrop of daily terrorist attacks which Israelis face. He wanted the Indian media to emulate this aspect of Israeli media. His name was Dr APJ Abdul Kalam.

It is time the Indian media heed his advice. 