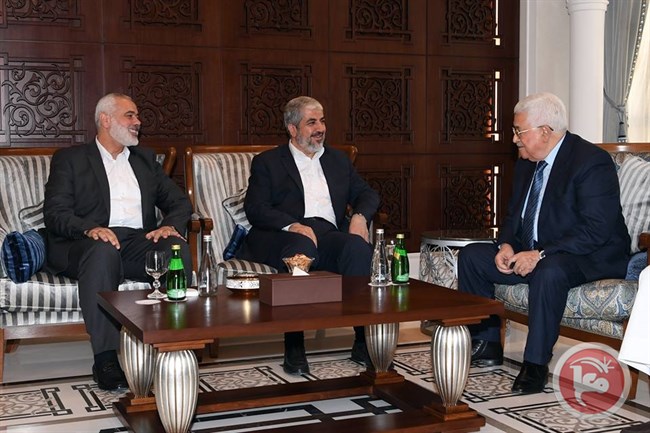 Leaders of the Hamas movement announced on Thursday that they had offered Palestinian President Mahmoud Abbas a “complete vision” to achieving reconciliation between Hamas and the ruling Fatah movement.

Hamas politburo head Khalid Mashaal, his deputy Ismail Haniyeh, and Abbas met in Qatar on Thursday, at the home of Qatari Minister of Foreign Affairs Muhammad Bin Abd al-Rahman al-Thani.
The Hamas movement released a statement following the meeting, saying they discussed challenges and risks surrounding the Palestinian cause, “priorities for the Palestinian people at this stage, especially achieving reconciliation and ending division.”

The statement added that the movement’s leadership “offered a complete vision for achieving reconciliation via certain techniques and steps to uphold previously signed agreements.”

The movement highlighted the necessity for “comprehensive elections on all levels” and an agreement between the political parties “on a political and resistance agenda to face the occupation,” specifically regarding the expansion of illegal Israeli settlements.

Palestinian Authority (PA)-run Wafa news agency reported that during the meeting in Qatar, Abbas stressed national reconciliation “and removing all causes of division by forming a national unity government and holding elections.”

According to Wafa, the two parties agreed that achieving reconciliation was the key to “saving the Palestinian national project and facing the Israeli government’s plans of destroying the two-state solution.”

The relationship between Hamas and Fatah has been in a dire state after a government of national consensus was dissolved in June 2015, one year after it was first announced.

The two Palestinian parties have had particularly tense relations since Hamas won legislative elections in 2006 and became the ruling party in the Gaza Strip.

Meanwhile, municipal elections set to be held earlier this month were postponed following a controversial decision by the Fatah-run Supreme Court in Ramallah. They were to be the first elections in the Gaza Strip in a decade.

Officials from the Fatah-led Palestinian Authority have criticized Hamas for creating a shadow government in the Gaza Strip and blocking efforts to reach political unity.

Hamas has in turn accused the PA of executing a plan to “eradicate” the movement from the West Bank, saying that an arrest campaign of hundreds of members was carried out by the PA to target reconciliation efforts between the two factions.