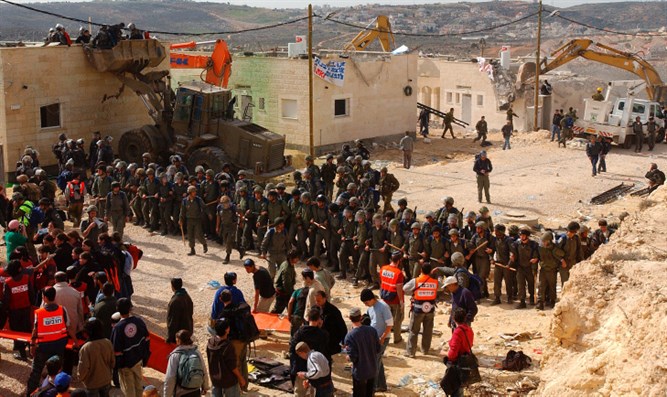 On Thursday night, I visited friends tonight in Amona –  David and Manya.

There is a court order to expel the Jews from Amona, and to destroy their homes.

This is a Jewish community that has existed for 20 years.

Manya is the daughter of Rabbi David Zeller, her devoted father and our friend, who died 7 years ago.

I have known Manya her whole life, ever since she was a little girl growing up in Efrat.

There was an unusual peace in their home on Thursday evening, with all of their children coming and going, all knowing that the government and army of Israel plan to expel them from their kind home, because the permits for building Amona  issued twenty years ago were challenged by constituent agencies of the New Israel Fund.

Not because the NIF wants justice for the Arabs in their specious claim to Amona.

Instead, NIF imperiously claims that  Jews who live in Judea or Samaria are an impediment  to peace with the PLO.

The PLO, through its proxy, the Palestinian Authority, promises no peace will be on the horizon until all of Palestine is liberated.

Normally, if there is a retroactive problem of housing permits for a community, the community pays a fine through arbitration and that is that.

Instead, the government of Israel follows the lead of the NIF and is set to destroy the homes that belong to David and Manya and forty other families, in a carefully  planned military operation , ready to march 40 families with 200 children out of Amona , while destroying their homes in the process , with nowhere to go but a temporary student dorm.

Yet the government  Israel, which bears full responsibility for the bureaucratic entanglement  of Amona, holds out no carefully planned operation as to what to do with 40 families and 200 children as they plan to expel them from their homes.

The current government of Israel instead ascribes to  a cold, crass and inhuman decision of the Israel High Court of Justice which for some reason takes precedence over continuity of life for a peaceful Jewish community.

The unkindest cut of all is that the government of Israel, which facilitated the creation and administration of Amona with 40 families of tax paying citizens , offers nowhere for the bonafide Israeli citizens of Amona to live.

People should speak out. Your closest Israeli consulate deserves a call.

And for people who live in Israel, there is no excuse for silence.

What happens to Amona can happen to anyone.