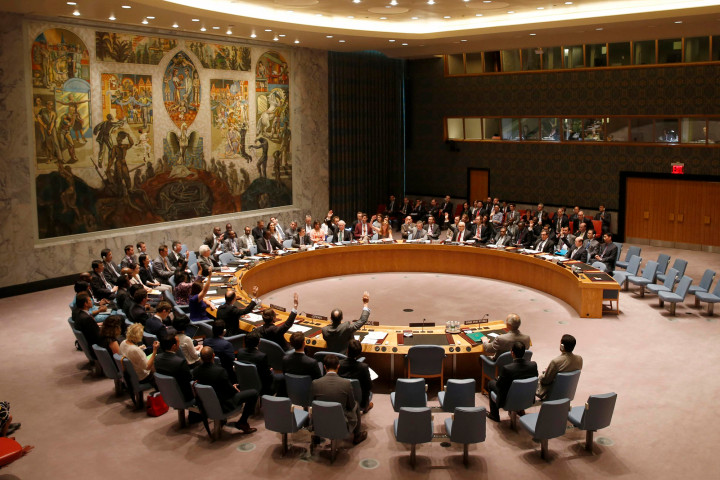 It’s been another busy week with John Kerry having a tantrum, the UN performing as per the usual script and some Palestinian Arab journalists trying to put confusing spins on history.

An extraordinary scene played out at the Brookings Institute annual gathering when John Kerry gave a keynote speech. Unsurprisingly it centered on Israel and featured the US Secretary of State venting his spleen on the Jewish State. Reminiscent of a spoilt child throwing a tantrum after having been refused his demands the outgoing politician blamed everyone but himself for a disastrously failed Middle East policy. From Aleppo to Yemen, Iraq to Iran and all points in between, Kerry’s attempts at foreign diplomacy have produced chaos, confusion, abandonment of allies and strengthening of terror groups and their sponsors.

Israel’s refusal to accept sacrificial lamb status and allow itself to be the 2016 version of Munich’s Czechoslovakia sell out has obviously been the straw that has broken the camel’s back. Lashing out at Israel’s leaders and hysterically branding Jewish settlement and settlers as beyond the pale he has at the end of the day revealed the real agenda driving the Obama Administration. The venue was ideal. Receiving funding from Hamas terror sponsoring Qatar and other Gulf States, the Brookings Institute was the perfect place to dump on Israel. John Kerry is of course entitled to speak his mind and articulate frustration but equally those who oppose appeasement policies which have left the region worse off over eight years should also be given the courtesy of a hearing. We can now anticipate a similar narcissistic blast from the White House before mid January. As I have said on more than occasion, the Jews of Judea and Samaria will be around long after those who condemn the return to our homeland are gone from the scene.

No round-up of weekly Israel bashing would be complete without the UN and its associated bodies engaging in their favourite activity. The General Assembly performing as per script did not disappoint and managed to pass six resolutions against the Jewish State while ignoring real threats to world peace and human rights abuses. This link by courtesy of UN Watch contains an excellent summary of the resolutions discussed and passed and will give you a good idea of how your taxpayers’ money is being utilized. If you feel sufficiently outraged I suggest you contact your local Member of Parliament and ask a few searching questions.

This week I attended the International Jewish Media Summit where a wide range of topics was discussed and debated. For each topic there was a panel of invited guests who spanned a wide spectrum of opinions and thus provided for balanced and comprehensive discussions.

For example the panel discussing the subject “Pluralism, the Kotel and the Deepening Clash of Religion & State” provided an ideal opportunity for the Dean of Reform Hebrew Union College, a politician from Yesh Atid, a Charedi woman activist, the Chairman of Gesher and a journalist to dissect this current controversy. At the same time they answered questions from the audience.

The panel discussion on “The Great Debate: Israel & the Shape of Things to Come” tackled questions such as “Is Israel-Palestinian Peace still Possible? What Should Israel’s Place be in the Regional Order; What is our Vision for the Jewish People?” Representatives of the coalition and the opposition were grilled and their responses debated.

During lunch, the Minister of Education & Diaspora Affairs who also happens to be the leader of the Jewish Home Party, spoke about his vision for the country, outlined plans to provide greater educational opportunities for all groups in Israeli society and also touched on challenges facing Diaspora Jewry and their relationships with Israel.

The first day concluded with some crystal ball gazing as to what the Trump Presidency is likely to portend.

Before that however there was a presentation by journalists from the Palestinian Arab Press entitled “The View from the Other Side.”  As I suspected and as it subsequently transpired this very important topic did not provide any sort of balanced perspective, but rather gave an opportunity for trotting out the standard PLO accusations and revisionist versions of history. This near monolithic view from the other side, albeit presented in a calm, rational and seemingly fair manner, nevertheless demonstrated the enormous gulf which faces us these days. Missing entirely were any Arab journalists who could have posed some searching questions and challenged the one-sided narratives.

I wanted to ask some questions but lack of time and opportunity prevented me from doing so. Here is what I had intended to say:

We have listened to an unending litany of complaints that Israel is alone responsible for the failure to establish a Palestinian State with part of Jerusalem as its Capital. Your analysis of why this is the case apportions total blame on Israel and its political leadership. It is a great pity that instead of using your journalistic skills to report the truth you have instead resorted to spouting discredited accusations against Jewish settlements and the legal right of Jews to settle areas designated by internationally binding agreements as part of the historic Jewish State.

You maintain that the Arab “right of return” poses no threat to Israel’s Jewish character and in fact you cannot understand why Israel’s Jewish status even needs to be recognized. Completely absent from your consideration are the Jewish refugees from Arab countries who were forced to abandon property and flee for their lives. You condemn Israel for not agreeing to concessions allegedly arrived at with Ehud Olmert and Ehud Barak and you also condemn Israel for insisting that any negotiations start from square one.

One of you lamented the fact that there was no David Ben Gurion like politician on the Israeli side today. Has it ever crossed your mind that in 1947/1948 you could have had your Arab State? In your desire to blame rather than report accurately can you explain why no such State was created by the Jordanians who illegally occupied the West Bank and East Jerusalem from 1948 to 1967? Why is the destruction of the Jewish State still part of the Charters of Hamas and the PLO?

Finally in falsely accusing Israel of becoming an apartheid State you are complicit in perpetuating one of the big lies used to delegitimize us. By the way, the Hashemite Kingdom of Jordan is today at least 70% Palestinian Arab. Does this mean that Jordan which denies political rights to its Palestinian Arab residents is the real Apartheid State?

Unfortunately there were no spokespeople for either the residents of Judea and Samaria or Arab media persons who know the real truth to challenge and provide balance.

The view from the other side thus illustrated yet again how the Arab media is part of the problem rather than any sort of solution.