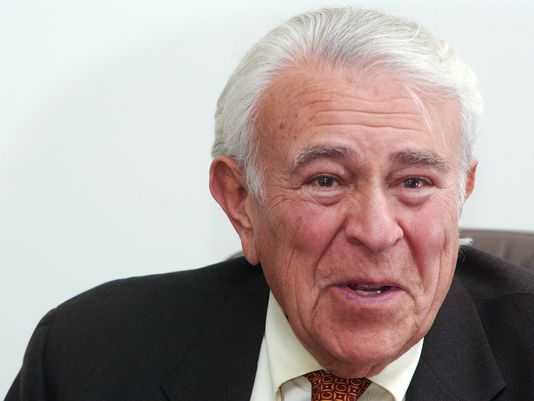 Former Republican Congressman  Ben Gilman died this week at the age of 94.

It is time to recall Mr. Gilman’s great moment in Congress, when he stood up to pressure from the PLO, State Department  and the government of Israel and fought the Oslo process.

On September 20, 1995, I was in attendance at the House International Relations Committee hearing, chaired by Rep. Ben Gilman,  that took place on Capitol Hill. As the press liaison for the Institute for Peace Education, LTD, I was asked to present the Committee with videotapes and transcripts of Arafat’s lectures to his people in Arabic, as recorded and transcribed by the Institute.

The overall subject of the MEDFA hearings was sensitive: whether and how to allocate funds to the PLO’s fledgling Palestine Authority, within the framework of the proposed MEDFA legislation which would allocate $100 million a year to the P.A. for a period of five years.

Congress raised concern for two reasons: There were serious doubts as to the nature of Palestinian compliance with the Oslo accords, and if the P.A. held assets of the PLO that it could draw upon.

Though the fact that such a hearing took place has been widely discussed, the content of that meeting has been scarcely reported.

MYTH ONE that pervaded the hearing and the subsequent reports was that the session was promulgated by some kind of Likud lobby on Capitol Hill. However, what I discovered was that there exists no Likud lobby on Capitol Hill. Moreover, the American branch of the Likud is broken into two factions and is not currently functional in the US Meanwhile, the Likud in Israel expressed no interest in organizing, let alone funding, such an activity on Capitol Hill. Rather, several former officials from the previous Likud gov’t CAME TO WASHINGTON ON THEIR OWN during the summer months, as expert witnesses on the credibility of the PLO. They came at the urging of several American Jewish constituent groups, and at the specific request of key Congress people. These former officials, were: Yosef Ben Aharon, who served as Prime Minister Shamir’s Chief of Staff; Yigal Carmon, Shamir and Rabin’s former Chief Advisor on Counter Terrorism, and Yoram Ettinger, who served under Shamir as the head of the Israel government Press Office and later as the Congressional liaison for the Israeli embassy. None of them were even in the United States at the time of the hearing, although Carmon did have the opportunity to provide a private security briefing to the chairman of the House International

Relations Committee at his vacation spot in Upstate New York in mid-August, at which time Gilman viewed the much publicized videotapes of Arafat’s recent speeches to his own people in Arabic that were recorded by the Institute for Peace Education in Tel Aviv.

MYTH NUMBER TWO about the hearing was that its purpose was to halt any possibility of funding the PLO. That the PLO would get promised American funding was a given the question was how and when and under what conditions.

Gilman was concerned that the US Congress had not had any real opportunity to review the data concerning PLO compliance, especially since there was a clear Congressional legal requirement for PLO compliance as a prerequisite for funding by the Palestine Authority – a requirement that was also in Israel’s interest. For that reason, Gilman requested that experts and concerned constituents be given the opportunity to testify on the subject. Gilman also asked Congress people to view the Arafat tapes.

Both the Israeli embassy in Washington and the Israeli consulate in New York contacted Gilman and implored the New York Congressman not to conduct the hearing.

A senior official of the Israeli embassy was particularly upset at learning that the Arafat tapes were going to be aired at US Congress. That same senior Israeli embassy official had previously reported to Congress and to the Conference of Presidents of Major Jewish Organizations that such tapes do not exist. In July, the embassy official’s story changed a bit. He claimed that the tapes do exist, but that they may have been forged. After Arafat himself attested to their accuracy in a meeting with Israeli media on August 10. 1995, the position of the Israeli embassy was that “some of Arafat’s remarks hurt the peace process”.

MYTH NUMBER THREE It had been widely reported that those organizations that testified for tougher PLO compliance were attacking the peace process and the Israeli government.

It is as if to say that anyone who criticized Yassir Arafat now casts aspersions on the State of Israel.

Yet House Committee member Rep. Gary Ackerman of New York pointedly asked each organizational representative who testified if they supported the Israeli government and peace process.

Every organizational representative at the hearing, including the president of the Zionist Organization of America, responded to Ackerman that they supported the peace process and recognized the Oslo accords as an irreversible international accord. Their expressed concern was that both sides keep the accord. The Congressional record of the testimony show that not one witness criticized the Israeli government.

MYTH NUMBER FOUR mentioned by Arab American activist Jim Zogby, in the Boston Globe of September 28, 1995, was that he was the only Arab organizational representative invited to attend the hearing: The fact was that thirteen Arab organizations were invited, including the PLO, but only Zogby accepted the invitation.

The representative of “Peace Watch”, the organization that monitored compliance of the accords, presented a detailed report of the Palestine Authority’s sorry record on the subject of the pursuit of terrorists: How, for example, the P.A. has refused to turn over escaped killers who are now in its jurisdiction, how the P.a. has issued weapons to armed militias opposing the peace process, and how the P.A. has firmly refused to conduct mass confiscation of illegal weapons. When Committee member Congressman Dan Burton of Indiana pressed the “Peace Watch” rep for an overall assessment of the P.A. record on extradition of murder suspects to stand trial in Israel, Peace Watch’s representative answered curtly, “It looks like the P.A. is 0 for 11”.

UNREPORTED “MEDFA” HEARING NEW ITEM NUMBER TWO: THE GAO’s STARTLING ADMISSION ABOUT PLO ASSETS AND THE CIA’s CLAMP ON HIS TESTIMONY. The head of the GAO, General Accounting Office, appeared as one of the expert witnesses at the Congressional hearings. The GAO had been specifically asked by Congressman Gilman to provide a detailed investigative report concerning PLO assets, before the US Congress would consider aid to the Palestinian Authority. At least half a dozen Congresspeople at the hearing quoted British intelligence reports that estimated PLO assets in the billions of dollars.

When the head of the GAO arrived at the Congressional hearing, with a briefcase full of documents detailing the assets of the PLO, the GAO head surprised the Congress by saying that the CIA would not permit him to reveal the contents of his briefcase to the US Congress. A hum went through the committee room.

Florida Congresswoman Ileana Ros-Lehtinen approached the microphone and asked for an explanation. “The explanation has also been declared classified by the CIA”.

After some bursts of laughter were heard through the committee room, the Congresswoman persisted with a pointed question, asking, “Isn’t it the case that such classification would occur only if and when American national security is violated. How in the world would the publication of PLO assets affect American national security interests?” The GAO head responded only that he could not answer that question.

The US State Department went one step further.

Journalists in Washington reported that a source in the American intelligence community asked that the Washington press corps not cover the Sept. 20th hearings because of the “sensitive testimony” that would take place that day. News agencies that had confirmed that they would attend did not appear.

As a result, the actual testimony of the September 20th hearing was not reported in any major wire service or news outlet in Washington.

Not the tapes of Arafat’s incitement. Not the Peace Watch testimony on the P.A.’s Arafat terror pursuit record. Not the admission of the GAO that the PLO has assets but that the CIA will not let him disclose them. The Israeli embassy in Washington got its wish. It was as if the hearing never took place.

In a parenthetical note, the Arafat tapes were indeed shown at the Congressional hearings. But due to pressures that were brought to bear by the State Department and the Israeli embassy, the committee agreed to hear only one minute of the tapes, where Arafat called for “Jihad”, a holy war on the Jewish state, which Zogby would later explain away as “dedication to a struggle”. Segments of Arafat praising terrorists or declaring that the Oslo accord was only a temporary agreement were not screened for the Congressional Committee.

The Palestine Authority’s response was not long in coming. On September 23, 1995, the P.A. issued a statement attacking the US Congress, saying that they had no right to add conditions to the aid package.

Throughout October, 1995, discussions continued, and further screenings of the Arafat tapes took place in Congress, even though they went unreported in the American press.

By the end of October, 1995, the date by which the aid to the PLO had to be extended, Congress had not agreed to a formula that would tie the MEDFA legislation to the necessary standards of compliance for the PLO and the P.A. to abide by.

On October 31, 1995, Yitzhak Rabin appeared at the Knesset Foreign Affairs and Security Committee and expressed doubt as to whether the peace process could continue.

On November 1, 1995, Rep. Gilman declared that on Monday, November 6, 1995 there would be a special session of the House International Relations Committee to decide on further funding for MEDFA and the Oslo process. A majority of the committee were set to terminate US support for the deal with Arafat and the PLO.

In the wake of Rabin’s funeral, Congress to reinstated funds for MEDFA.

Had Mr. Rabin died after November 6, Gilman’s initiative would have become law.

With the disaster that the Oslo process wrought, you can say that Ben Gilman’s actions were vindicated.

You can call this Ben Gilman’s unsung “profile in courage”.