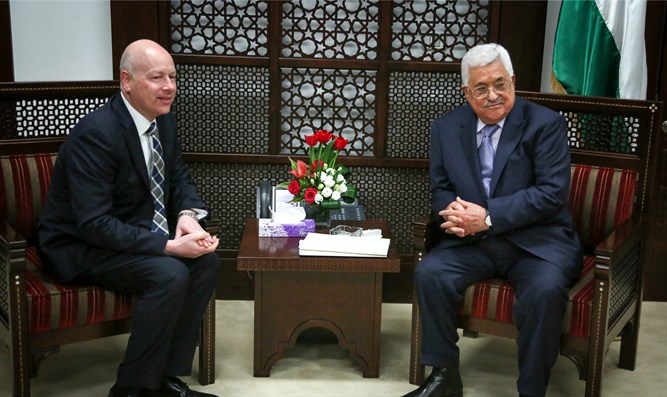 IMRA: Jason Greenblatt appears to have decided to facilitate Abbas “talking the talk”.

“President Abbas and Mr. Greenblatt also reaffirmed the U.S. and the Palestinian Authority’s joint determination to combat violence and terrorism.” BUT Abbas CONTINUES to insist that any Palestinian detained by Israel for engaging in violence against Israelis be released!

They reaffirmed the commitment of both the Palestinian Authority and the United States to advance a genuine and lasting peace between Israel and the Palestinians.

President Abbas told Mr. Greenblatt that he believes that under President Trump’s leadership a historic peace deal is possible, and that it will enhance security throughout the region. President Abbas said he looked forward to discussing the possibilities for peace directly with President Trump during his upcoming visit to Washington.

President Abbas and Mr. Greenblatt also reaffirmed the U.S. and the Palestinian Authority’s joint determination to combat violence and terrorism.

President Abbas assured Mr. Greenblatt that he is fully committed to creating an atmosphere that is conducive to making peace and would heighten his outreach efforts to the Israeli public.