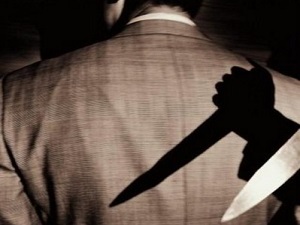 Since Biblical times the Jewish People has experienced endlessly the validity of this admonition…writes Michael Kuttner.

Nothing much has changed over the millennia. In fact if anything false friends have multiplied at an alarming rate. One would have thought that by now after thousands of years of dealing with this problem we would have developed a fail safe strategy for exposing and combating such individuals. Unfortunately there are still too many Jews who are seduced by seemingly genuine gestures and who even when the horrible truth hits them in the face do not want to face reality. The trick is to choose between genuine friends whose support derives from a deeply-felt appreciation of the justice of Jewish history and those whose fair-weather gestures are cosmetic and transitory.

In periods of persecution there have been brave souls who have stood with us against the forces of bigotry and genocide. They may have been a minority but their friendship was crucial in critical times. Today when waves of delegitimisation and hostility against Jews and Israel seem to be assuming tsunami proportions we see once again how friendship is being redefined.

One of the common denominators is that those professing friendship never admit that their actions demonstrate the exact opposite to everyone but themselves. Some latest examples should suffice to highlight the situation which currently exists.

First of the doubtful friends must be Bill English, the New Zealand Prime Minister. As soon as his new Foreign Minister all but admitted that sponsoring Resolution 2334 which in effect delegitimises Israel connection to Jerusalem amongst other places, had been a mistake, the PM pulled the rug out from under him. In one stroke he managed to sabotage any attempt to repair relations with Israel and in the process revealed himself as totally inept and a false friend of the only true democracy in the region.

The French election result is another example of how easy it is to fool the majority into believing that the future relationship between France and its own Jewish community as well as Israel are now headed towards tolerance, fraternity and eternal friendship. Lost in the euphoria of a post election high is the stark fact that in the first round, 42% of the electorate chose to vote for extremists of the left and right whose agenda included hatred for Israel and the banning of kosher shechita and the public wearing of kippot. In the second round of voting the extreme right garnered 11 million votes and stands poised to do well in the legislative elections next month. Experts predict that the next Presidential elections in 5 years time could see them doing even better especially if economic conditions do not improve. Meanwhile President Macron is being hailed as the saviour of France and a genuine friend of Israel. This latter attribute has yet to be proven and my guess is that sooner rather than later true Gallic “friendship” will manifest itself to our detriment.

Talking with expatriate French Jews, all of them without exception express pessimistic views as to the future for French Jewry given the huge number of Islamic fundamentalists now part of French society. What will it take before the majority of those still remaining wake up to the bleak future in store for them in the future?

The EU loves to portray itself as a “friend” of Israel. Some of its members do try but the majority seems to prefer engaging in activities which seek to damage us. What other explanation can one give when confronted with countries funding groups dedicated to undermine and delegitimise the very concept of a Jewish State where Jews can live freely and practice their faith without fear or hindrance? In recent days the Wallonia part of Belgium has resolved to ban shechita thus depriving Jews living there of kosher meat. The Swedish Foreign Minister, an openly hostile politician, has lauded the UNESCO vote which describes Israel as an illegal occupier in its own Capital. One of the political parties in the ruling coalition in Norway intends to introduce a resolution into Parliament outlawing circumcision for any males under the age of sixteen. All these actions are undertaken by countries which purport to be friends. With “friends” like these who needs enemies?

A recent survey in Germany showed that 40% responding are infected with contemporary Jew-hatred – that is hatred for the Jewish State. A Left Party deputy in the Bundestag admitted that Israel related anti-Semitism has become respectable.

The EU coordinator on combating Jew hatred declared at a recent conference of European Rabbis that “Jews have a future in Europe.” Given past and present developments I very much doubt the validity of that statement.

As an illustration of how even genuine friends can become confused the Archbishop of Canterbury on a visit to Israel declared to President Rivlin that “the Balfour Declaration has an element of unfinished business.” What he really means but his British manners refuse to articulate is that unless and until another terror-supporting Arab State is created at our expense somehow the Balfour Declaration has not been fulfilled. In actual fact this is a complete distortion of the Declaration which supported the re-establishment of Jewish settlement and sovereignty on both sides of the River Jordan. In true false friend mode the UK reneged on its solemn promise, hacked off half of the mandate to create an Arab State and then worked assiduously to thwart any chance of Jewish independence. Modern revisionism however leads to the absurd statement of the Archbishop.

Talking of the British brings us to those who can be described as honest enemies. The British Foreign Office has never hidden its malodorous intentions and thus their latest actions should come as no surprise. According to UK media reports they have scuttled an invitation for a member of the Royal family to visit Israel and participate in the centenary celebrations of the Balfour Declaration and the liberation of Beersheba and Jerusalem from Ottoman despotic control. In seventy years thanks to Foreign Office intervention not one member of the British Royals has ever made a State visit. Contrast this with numerous visits made to Arab countries all of whom have a very doubtful record as far as human rights and religious freedom is concerned. We now wait with baited breath to see whether Theresa May, a friend of Israel, will override this latest hostile gesture or whether once again the ingrained prejudices of the Foreign Office will prevail.

Although one hundred years have passed since the Ottomans were expelled from the region we are witnessing today the rise of another would-be Sultan in Turkey who has visions of grandeur. Despite the numerous and major problems facing Turkey, President Erdogan who now has unprecedented powers, feels the irresistible urge to stick his nose into our affairs and incite hatred. Not content with suppressing the Kurds he now sows seeds of violence by accusing Israel of Judaisation of Jerusalem and urges the Moslem mobs to invade and riot on the Temple Mount. There were those who thought that after appeasing him and making nice noises he would change from an open enemy to a “friend.” More realistic observers warned that leopards do not change their spots and thus it has proven for all to see.

Media personnel love to portray themselves as “friends” even while they are filing unbalanced and totally biased reports from and about Israel. Occasionally the mask slips and reveals their false friendship. Such an event occurred this week when the Reuters Israel bureau chief slammed the new US Ambassador for desecrating Nakba Day. The Ambassador’s alleged crime? He is taking up his position on the day Palestinian Arabs mourn the establishment of Israel. According to our Reuters “friend” this is the height of insensitivity. One couldn’t make this up.

We are bracing for the impending visit of President Trump. Will the endemic hostility of the State Department prevail or will Trump pull one of his surprises out of the hat?

An honest enemy is better than a false friend