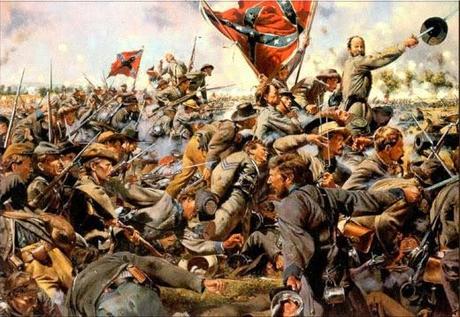 o most people, this is all a matter of sentimental nostalgia.

Not to the South and not to the people who relish the Confederacy.

Not to the people who were enslaved by the South.

Yet what is missing here is very important element.

The South was defeated in what Dixie always calls the war between the states.

How, then, were statues and memorials erected to remember the vanquished and not the victorious in that bloody war?

The answer is what occurred in the aftermath of the 1876 Presidential election, with the stalemate in the Electoral College between the Republican Rutherford B. Hayes, and the Democrat Samuel J. Tilden.

The results of that acrimonious fight: A decision by Southern states to throw their support behind Hayes, in exchange for a cancellation of the U.S. program of Reconstruction, a euphemism for UNION military occupation and subjugation of former Confederate States.

Following the Hayes inauguration in 1877, the era of Reconstruction ended.

Former Confederates resumed their leadership in southern states, all of which enacted new legislation which restored the freed Blacks into quasi-slave status.

Jim Crow laws and a system of strict segregation were established, which would last almost 90 years and which would spread throughout America.

Hence, when Blacks were conscripted into the US military, separate fighting units were established, a practice that lasted into the 20th century.

The highest law in the land, the US Supreme Court, ruled in favor of segregation, in the famous Pessy vs. Ferguson decision, in 1896.

That decision was not reversed until the Brown Vs. Board of Education Supreme Court Decision of 1954.

The Confederate statues meant one thing to the South.

They had lost the war on the battlefield, yet they won the war through politics and diplomacy.

Blacks felt saw them as a source of continuing humiliation, especially since the subjugation of Blacks was renewed in 1876.

I was sensitized to this because, 50 years ago in high school in Philadelphia, at Akiba Hebrew Academy, we had a teacher named Dr. Harold Gorvine who ran a seminar for us on the 1876 US presidential elections and the aftermath of Reconstruction.

Dr. Gorvine taught us through role play about American politics at the time.

At the time, I worked for a summer school program in West Philadelphia for Black children, and taught the children a chapter in American history which they did not know.

From a glance at current American media, it is not clear that most Americans know about the events of 1877, which has affected the legacy of America to this day.