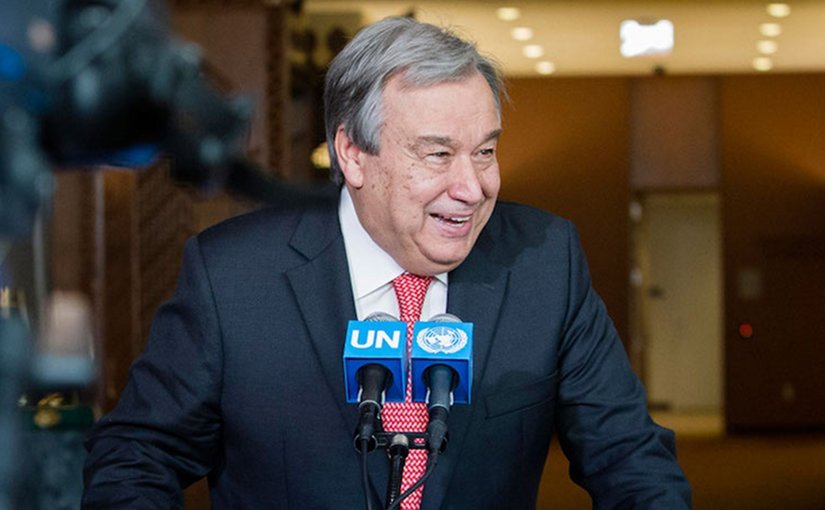 António Manuel de Oliveira Guterres became Secretary-General of the United Nations on January 1, 2017. Once Portugal’s prime minister, he was UN High Commissioner for Refugees from 2005. For ten years he headed the world’s largest humanitarian organization during a period when unprecedented numbers of people fled their homes to seek safety or a better life elsewhere. He used his time in office to achieve fundamental organizational reform, cutting staff and administrative costs, while expanding the organization’s emergency response capacity during the worst displacement crisis since the Second World War.

At the end of his term Guterres had more than 10,000 staff working in 126 countries; and the UNHCR was providing protection and assistance to over 60 million refugees, returnees, internally displaced people and stateless persons.  The only refugees for which the UNHCR had no responsibility was the Palestinians. This is one desperately costly anomaly that the new UN Secretary-General must address sooner rather than later, as he seeks to reshape an organization that most world leaders agree is in urgent need of change from within.

Reform of the whole UN organization now looms large on his agenda. Ever more urgent calls for action are emanating from world leaders as diverse as Britain’s prime minister, Theresa May, and Turkey’s president, Recep Tayyip Erdogan. On Monday Sep 18, 2017 US President Donald Trump hosted a high level meeting on the subject, which ended with 128 nations signing a declaration of support for UN reforms, only Russia and China abstaining.

Humanitarian concerns underlie one of the reforms to the UN structure urgently requiring attention. Some 5 million Palestinians under the aegis of UNRWA (the United Nations Relief and Works Agency for Palestine Refugees in the Near East) are doomed to perpetual refugee status.

At around the time the state of Israel came into being, something over half the non-Jewish population of what used to be called “Palestine”, some 750,000 people, left their homes. The 1949 General Assembly resolutionestablishing UNRWA called for “the alleviation of the conditions of starvation and distress among the Palestine refugees.” Yet the resolution also stated that “constructive measures should be undertaken at an early date with a view to the termination of international assistance for relief.” In other words, the new refugee agency’s mission was intended to be temporary.

Nearly 70 years have passed. The “temporary” UNRWA has been transformed into a bloated international bureaucracy with a staff of 30,000 and an annual budget of around $1.2 billion. As for the number of Palestinians registered by UNRWA as refugees, that has mushroomed from 750,000 in 1950 to 5.6 million today. How could such a situation have been allowed to develop? The transformation occurred according to the diktat of UNRWA itself, which decided to bestow refugee status upon “descendants of Palestine refugees,” in perpetuity. The growth in UNWRA’s client base is therefore exponential, justifying an ever-expanding staff and an ever-increasing budget. It has been estimated that by 2050 the number of UNRWA’s “Palestine refugees” will reach just short of 15 million.

When the civil conflict broke out in Syria in 2011, some 3 million UNRWA registered Palestine refugees were living in some 58 camps in Jordan, Lebanon and Syria. By early 2017 up to 280,000 Palestinians had been displaced inside Syria, and a further 120,000 had fled to neighbouring countries. But what has justified this perpetuation of refugee status on millions of human beings?

The three key policies pursued by the UN’s main refugee organization, the UNHCR, which Guterres ran so effectively, are voluntary repatriation, local integration and resettlement. As a result UNHCR has resettled literally millions of unfortunate people who have left their homes, willingly or unwillingly, over the years. A major effect of UNRWA’s humanitarian activities, on the other hand, has been not only to maintain millions of people in their refugee status decade after decade, but to expand the numbers as generation has succeeded generation.

Over the past 70 years UNRWA has allowed itself to become a tool of those Arab states intent on using the Palestinians as bargaining chips in their anti-Israel politicking. For the receiving states to resettle and absorb these people into their new places of residence would be to remove a formidable negotiating advantage, and have the effect of legitimising Israel. The result? Jordan today contains over two million Palestine refugees, of whom 338,000 are still living in camps. In Lebanon an Amnesty International study described registered Palestine refugees as living in “appalling social and economic conditions”. Following Lebanon’s civil war in 1990, the 400,000 Palestine refugees living there were barred from professions such as medicine, law and engineering and were not allowed to own property. A very partial relaxation of these harsh conditions was granted In June 2005 to Lebanon-born Palestinians.

For its part, UNRWA – unlike UNHCR – made no effort to achieve integration or local resettlement. It washed its hands of any involvement in “final status” considerations.

None of this is good enough. There has been talk of dismantling UNRWA, or of absorbing it into the UNHCR, or of radically amending its terms of reference. Any of these would be preferable to allowing the present state of affairs to run on indefinitely. Guterres must put this pressing issue high on his agenda for UN reform.

The signs are good. Guterres is a reformer by temperament. He himself has argued that the UN’s unwieldy bureaucracy and structure need to be reshaped for a more interconnected world. UNWRA which keeps Palestinians permanently dependent as refugees is not currently fit for purpose. If it is to remain in operation, its remit requires fundamental reconsideration, its terms of reference need to be substantially amended, and its functions must be subject to rigorous and continuous scrutiny. If it cannot subject itself to this degree of reform, then it should be wound up, and its functions transferred to the UNHCR. Since this step would require a majority vote in the UN General Assembly, it would represent a major diplomatic challenge for the UN’s new Secretary General. Antonio Guterres seems the very man to take it on, and succeed.