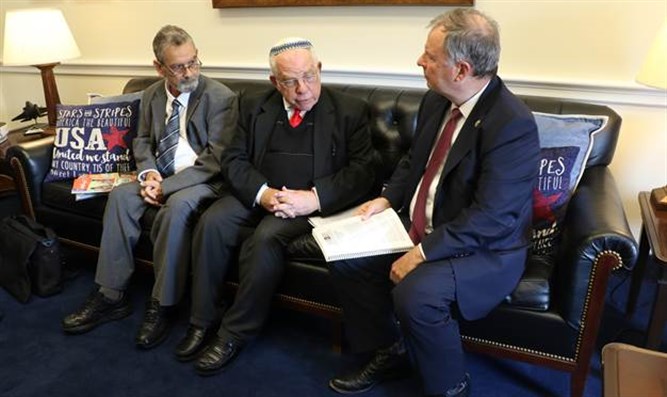 Yesterday, I was pleased to meet with officials from the Simon Wiesenthal Center and the Center for Near East Policy Research to receive a report detailing how the United Nations Relief and Works Agency (UNRWA) allows inflammatory anti-Israel and anti-Semitic bias to be written into textbooks used in their schools. It is time to hold UNRWA accountable for the promotion of violence against Israelis and Jews that is poisoning the minds of Palestinian children.

This groundbreaking report was written by Arabic scholar Dr. Aaron Groiss and Israeli Defense Forces Lt. Col. Jonathan Halevi, a senior researcher at the Jerusalem Center for Public Affairs. David Bedein, the CEO of the Center for Near East Policy Research and Rabbi Abraham Cooper, the Associate Dean and Director of Global Social Action of the Simon Wiesenthal Center, were also in attendance. The group is presenting the same report to U.N. Secretary General Guterres’ office in New York City today.

All funding for UNRWA should be cut until reform conditions are met. Textbooks that delegitimize Israel, denigrate the Jewish people, promote the “right of return” through violent struggle, and glorify martyrdom must be banned. I have introduced two bills in Congress to reform the United Nations, and investigate how U.S. taxpayer dollars are spent in the international organization. H.R. 263, the United States Sovereignty and Commercial Freedom Act, states that U.N. Security Council Resolution 2334, which deemed Israeli settlements in the West Bank and East Jerusalem illegal, should have no effect under U.S. law. H.R. 264, the United Nations Review and Accounting Act, prevents U.S. funds from being transferred to the United Nations until Congress receives a comprehensive report on U.S. contributions to the U.N.

I hope that both of my bills are passed in the U.S. House of Representatives because it is imperative America stands with moral clarity in support of Israel, the only democracy in the Middle East. The publication of this report marks the beginning of an important process to bring about much needed reform to UNRWA, and I look forward to sharing it with my colleagues in Congress and the State Department.