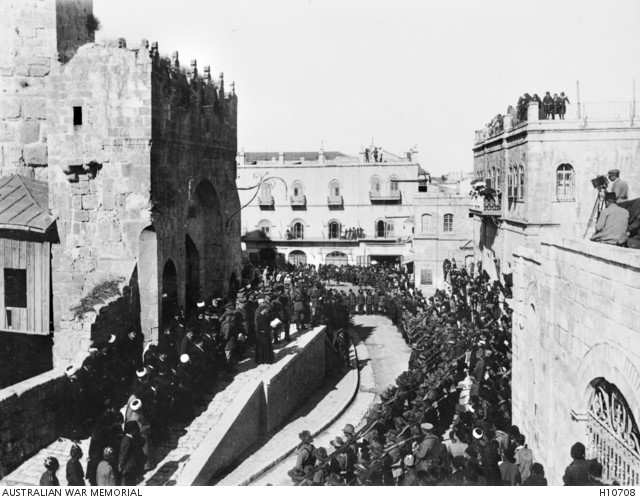 Celebrations are an ideal opportunity for friends to gather and join in showing solidarity and friendship…writes Michael Kuttner.

We stand poised to commemorate one hundred years since the liberation of Beersheba and Jerusalem from despotic Ottoman occupation and the issuing of the Balfour Declaration by the United Kingdom Government. Both anniversaries are significant milestones on the road to restored Jewish independence in our ancient homeland.

Friends and supporters from “down under” as well as in the UK are gathering to join Israelis in ceremonies and parades. The Anzacs are still fondly remembered by older locals particularly those who interacted with them during the Second World War. The exploits of the Anzacs in 1917 however are less well known. Apart from those who have visited the war memorials or Commonwealth cemeteries scattered around Israel the contributions of soldiers from New Zealand and Australia is unknown.

Australia has been particularly active in keeping alive the deeds of their soldiers while serving in occupied Ottoman Palestine and that is why almost all the publicity associated with the forthcoming celebrations has concentrated on them. In fact the absence of any publicity about any New Zealand contingent means that the average Israeli is totally unaware of a Kiwi presence.

The re-enactment of the famous cavalry charge which defeated the Ottomans in Beersheba is being undertaken solely by Australian descendants of the original soldiers. This has garnered much attention and undoubtedly will be the highlight of the commemorations on 31 October. It is a pity that the absence of a visible New Zealand presence will mean that locals are unlikely to obtain a complete and accurate understanding of its contribution to the campaign.

Thousands of Australians are coming for the events. I have no idea how many Kiwis are coming but it seems to be miniscule.

This lack of a meaningful New Zealand presence is also reflected in the official representation being sent from both countries.

The Australian Prime Minister accompanied by a strong delegation will be in attendance. Originally the New Zealand Prime Minister was due to come but in the meantime the elections have scuttled that plan. The new Prime Minister is no doubt busy settling into office and her Foreign Minister is staying home. In the absence of any political presence, New Zealand will be represented by the Governor General who as the nominal head of State is apolitical and therefore unable to engage in any meaningful negotiations with the Israeli Government. Likewise the NZ Ambassador to Israel who ironically is stationed in Turkey will only be a fleeting visitor. It will be interesting to see what sort of message they convey as NZ still refuses to apologize for or withdraw its support of the scandalous UN Resolution 2334 which it sponsored with such human rights “champions” as Venezuela and Malaysia.

It is a great pity that at a time when friends are gathering to celebrate this momentous occasion and when Malcolm Turnbull will undoubtedly reiterate his personal and his Government’s whole hearted support for the Jewish State that New Zealand’s voice will either be absent or muted.

The historical revisionists are alive and active. Condemning and denigrating the events of 1917 is now in full swing. The chorus of those opposed to the very notion of a restored Jewish national homeland is heard on all sides. Led by Arab leaders and supported by others with the same agenda the exploits of the Anzacs and the issuing of the Balfour Declaration are portrayed as shameful events.

In actual fact both events marked a high point in Britain’s attempts to provide a safe haven for Jews and restore sovereignty to a Jewish nation. Unfortunately it all went down hill not long afterwards. Truncating what was intended to be part of the reborn Jewish State the British gifted territory east of the River Jordan to Arabs from Arabia. Ignoring the legally binding San Remo Agreement, endorsed by the League of Nations, the British Foreign Office, not for the last time, ignored its mandated obligations.

Overlooked and ignored by critics today is the fact that if the Arab countries would have agreed to co-operate and live in peace with Jewish Palestinians they could have achieved a mutually acceptable basis for coexistence. Instead, the Arab and Moslem world has been in a state of continual denial over its own implacable failure to accept the right of Jews to their own country.

The critics of Balfour on the hard left likewise refuse to recognise that Jews have rights guaranteed to them by the international community since 1917 onwards. The anti-Israel virus now infecting socialist and left-wing politicians in the northern hemisphere has already reached the antipodes. In Australia the Labor Party stands poised to recognise a non-existent Arab country called Palestine even though its raison d’être is the delegitimisation of Israel and the denial of Jewish connections to territory settled by Jews for over three thousand years.

Together with the Greens the supporters of this revisionist version of history have nothing but contempt for the promises of Balfour and the momentous events which it precipitated one hundred years ago.

Likewise we can expect nothing different from the new coalition in New Zealand. Some people are joyful that the new NZ Foreign Minister is perceived as even-handed on Israel. It will be interesting to see how quickly he falls into line with his partners.

Meanwhile back in the UK the leader of the Labor Party and widely tipped next Prime Minister, Jeremy Corbyn, will be missing in action. He has turned down an invitation to join Theresa May and Bibi Netanyahu at a celebratory dinner commemorating the anniversary of the Balfour Declaration. Abbas and friends are demanding that Britain apologize for this “criminal” gesture in 1917 and pay compensation for all the misery it has caused them ever since. My bet is that Corbyn will oblige with the apology amidst much groveling and abject breast beating. How long before others of a similar political persuasion follow suit?

Thankfully we have survived worse disasters than Jeremy Corbyn and his political allies elsewhere. As this coming week’s celebrations in Beersheba will demonstrate, the Zionist enterprise launched by Lord Balfour and the brave Anzac soldiers is alive and thriving.

In November we will celebrate the liberation of Jerusalem from Ottoman occupation by General Allenby and Anzac forces.

The City of David’s restoration to full Jewish sovereignty is thus the culmination of 100 years of prayers, hopes and action.