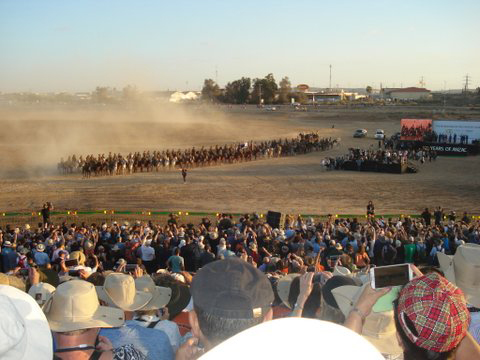 It is not by chance that they occur within the same week because they are inextricably linked. Without the defeat of the corrupt and oppressive Ottoman Empire it is doubtful whether Jewish independence would have been restored in the land which had historically been the home of the Jewish people for millennia. The once in a lifetime commemoration in Beersheba has been extensively reported but I want to share some personal thoughts on this day, jam-packed with unforgettable nostalgia, tributes and experiences.

I think it is true to say that Beersheba has not witnessed such excitement since the British and Anzacs liberated the city 100 years ago. From a dusty, backward and neglected Ottoman occupied garrison town it has blossomed into the capital of the Negev. It is now a thriving metropolis and is the fourth largest metropolitan area in the country with over 362,000 residents. Like other parts of the country which under Ottoman Moslem rule remained mired in poverty and dusty underdevelopment today’s landscape is entirely different.

With the road to Jerusalem open after the battle of Beersheba the stage was set for dramatic development of the neglected country by Jewish chalutzim (pioneers) and settlers. Infused with enthusiasm and vision and bolstered by the Balfour Declaration which was followed by the San Remo Agreement and endorsement by the League of Nations, the barren land was painstakingly transformed into oases of flourishing communities. Swamps were drained, malaria combated and employment provided in agriculture and industry.

I mention this because what is usually overlooked is the impact it had on the Arab peasant farmers who during the years of Ottoman rule were content to subsist in poverty and primitive conditions. With the advent of the Jewish revival of mandated Palestine the Arabs were afforded the opportunity of gainful employment and escape from the cycle of deprivation. While some did grasp this opportunity offered them the majority succumbed to the incitement of their leaders and launched a campaign of violence and delegitimisation which unfortunately has lasted until the present time. The Beersheba commemorations which spread out over a full day from dawn until evening provided visitors in particular and also locals a glorious opportunity to witness history in action. On the very day and at the exact hour that the Anzacs charged the Ottoman defences, today’s Anzac representatives re-enacted their predecessors’ cavalry attack. As the sun set in the distance we saw through the dust and haze a long line of mounted soldiers making their way to the spot where the cavalry charge had taken place. The look of absolute awe and emotion on the faces of Australian descendants sitting around me was moving. In fact it was so moving that many could not avoid weeping as they imagined their relatives participating in this event in 1917.

This sense of being present at a once in a lifetime occurrence repeated itself continually throughout the day. I had the opportunity of talking with many Australians and New Zealanders and it was obvious that the Beersheba experience in particular and being exposed to Israel and Israelis in general had made a deep and lasting impression. At the combined service held at the immaculately tended War Cemetery where so many of these brave Anzacs are buried, the atmosphere was electric. Australians sitting around us burst into fervent cheers and woops of support as the Israeli Prime Minister and his Australian counterpart exchanged mutual expressions of admiration and support. The poignant wailing chant sung by a Maori representative added an eerie tone to the proceedings. After the national anthems were sung and the wreaths had been laid it was interesting to hear the feedback from those present. A common theme heard then and throughout the day was one of solidarity and “mateship” followed by wonderment at how Israel and its people showed so much gratitude and appreciation for the sacrifices of the Anzacs. This came to the fore again as we watched the parade of mounted horses, some being ridden by descendants of the original soldiers, through the streets of Beersheba. School children who lined the roads waved flags and cheered enthusiastically. This spontaneous expression of solidarity evinced loud clapping from visitors.

The New Zealand and subsequent Australian ceremonies provided further opportunities for mutual interaction. By the time festivities ended with a barbeque at the Australian Park most participants were dropping with fatigue but still determined to savour every moment.

Mentioned on numerous occasions during the day was the fact that the liberation of Beersheba was followed by the liberation of Jerusalem and the issuing of the Balfour Declaration. There is no doubt that this expression of support by the British Government jump started the re-establishment of Jewish sovereignty and set in motion an unstoppable momentum. Subsequent shameful British actions designed to frustrate the implementation of Balfour’s solemn pledge and its legal endorsement by the international community, failed to derail the ultimate goal. Today the deniers, revisionists and delegitimisers are hard at work to undo Jewish independence. Politicians, the media and academics are keen to rubbish Balfour while the Arab world blames him for all their ills and woes. The stark truth of course, evident to all except those blind to historical reality, is that from the 1920’s, from Peel onwards an Arab State could have been established alongside a Jewish one. However the desire to murder, destroy and pillage Jews took precedence over establishing a flourishing country on territory originally allocated and promised to the Jewish people. By unilaterally cutting off the entire territory east of the River Jordan and establishing Transjordan where today over 70% of the population are Palestinian Arabs, the British unwittingly laid the foundations for the real two State solution.

In true and tried fashion Arab countries love to blame all their failings and misery on a convenient scapegoat. In this particular case they are now demanding that the UK apologise for the Balfour Declaration and pay compensation. Deliberately ignored of course is the fact that their current mess is entirely self-inflicted. Instead of pointing out this self-evident truth those on the left in particular feed into the mirages and self delusionary hyperbole so beloved by those for whom the sight of Jews successfully building a democratic modern country is an anathema.

The anniversaries of the battle for Beersheba and the Balfour Declaration are indeed events worth celebrating. Honouring the memory of the brave Anzacs and the prophetic vision of Balfour is something we as Israelis and Jews will cherish for eternity.