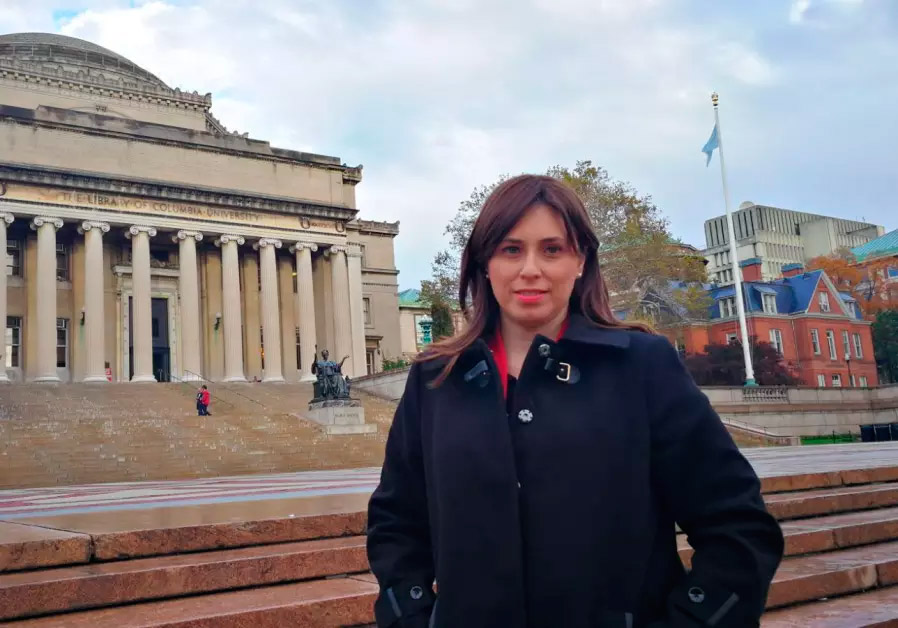 The iceberg itself was revealed the next day on Capitol Hill. On Tuesday the House Judiciary Committee held a hearing on the Antisemitism Awareness Act of 2016. The bill is intended to facilitate the fight against antisemitism on campuses by requiring university authorities to refer to the State Department’s definition of antisemitism when they consider whether harassing acts were “motivated by antisemitic intent.”

The State Department’s 2010 definition of antisemitism was formulated to fight what is referred to as “the new antisemitism.” Unlike the antisemitism of the first half of the 20th century which was directed against Jews as individuals, antisemitism today is increasingly expressed as hatred of Jews for their support for Israel – the collective Jew.

The State Department’s definition of Jew-hatred includes the delegitimization of Israel’s right to exist, demonization of the State of Israel, including by likening it to Nazi Germany, and the use of double standards to judge Israel’s actions. It also defines as an expression of Jew-hatred the allegation that Jews are more loyal to Israel than they are to their countries of citizenship.

US Jewish organizations have repeatedly asked university officials to use the State Department’s definition of antisemitism as a basis for judging allegations of antisemitic attacks and harassment against Jewish students. Most universities have refused.

Passing the bill into law is urgent. As ADL CEO Jonathan Greenblatt noted in his congressional testimony, attacks against American Jewish students rose 59% in the first nine months of 2017 in comparison to the same period in 2016.

Despite the increase in antisemitism, four witnesses on Tuesday – all Jewish – insisted the bill is unnecessary. Two of the bill’s opponents are Jewish studies professors.

Pamela Nadell, director of the Jewish Studies Program at American University and the president of the Jewish Studies Association, argued that while there are acts of antisemitic harassment on campuses, these acts have not “created a climate of fear that impinges upon Jewish students’ ability to learn and experience college life to the fullest.”

Barry Trachtenberg, holder of the Presidential Chair of Jewish History at Wake Forest University, took things a few steps farther. Trachtenberg not only disputed that there is a problem with antisemitism on college campuses. He rejected the State Department’s definition of antisemitism.

The two other witnesses who opposed the law, Kenneth Stern from the Rosenberg Foundation and Suzanne Nossel, executive director of the non-Jewish PEN America Center, both couched their opposition to the civil rights bill as support for freedom of speech.

Stern, Trachtenberg and Nadell cited a Stanford study of campus antisemitism to support their claim that antisemitism on campuses is not significant enough to warrant the proposed legislation.

The study, published in September by a team led by Prof. Ari Kelman, an associate professor of education and Jewish studies at Stanford, concludes that US Jewish students do not feel threatened by antisemitism on their campuses. The study also claimed that insofar as discussions of Israel are concerned, Jewish students are equally offended by Israel advocates and Palestinian supporters. In the study’s words, “They are turned off by the tone of that debate on both sides.”

As Kelman admitted and Nadell acknowledged, Kelman’s study has no scientific value whatsoever.

Its data are based on a statistically insignificant, deliberately non-representative sample of non-affiliated Jews on five California campuses. That Nadell, Trachtenberg and Stern all used a worthless study to justify their opposition to the antisemitism bill indicates they deliberately distorted the nature of the problem of antisemitism on campuses to block passage of the bill.

Kelman’s and Trachtenberg’s work to belittle the bigotry plaguing Jewish students on campuses is in line with their political activism. Kelman is a member of the Academic Council for Open Hillel.

Open Hillel is a pressure group that demands that Hillel permit activities supportive of the Boycott, Divestment and Sanction movement to be carried out under its aegis.

Trachtenberg signed a petition advocating an academic boycott against the Hebrew University. He has signed petitions vilifying Israel organized by the antisemitic Jewish Voices for Peace BDS group.

As the Simon Wiesenthal Center’s director Rabbi Abraham Cooper, who testified in favor of the bill, said having Trachtenberg testify is “like inviting people from the Flat Earth Society to a hearing about NASA.”

This brings us back to Princeton and Rabbi Julie Roth, the Hillel director who disinvited Hotovely.

Like Kelman and Trachtenberg, Roth also has a public record. As Yisrael Medad reported in The Times of Israel, Roth is a member of the New Israel Fund, which supports BDS.

Her husband, Rabbi Justus Baird, is an active member of J Street and Rabbis Without Borders. The couple has donated to the BDS group T’ruah.

As David Bedein reported at Arutz 7, Roth has a record of canceling pro-Israel events. In 2009 she canceled a talk by Nonie Darwish, a former Muslim Israel advocate.

In an open apology to Hotovely published on Wednesday in The Jerusalem Post, Hillel International’s President Eric Fingerhut and Roth insisted that her treatment was “an isolated incident.”

But a similar incident occurred just weeks ago at Stanford Hillel.

Stanford’s Hillel canceled a scheduled event with Reservists on Duty, an Israeli anti-BDS group that brings IDF reservists to US campuses. Last month’s event was supposed to feature non-Jewish IDF reservists, who came to Stanford to share their military experiences.

Like Hotovely’s speech at Princeton, the Reservists on Duty event at Stanford was held at Chabad House after Hillel boycotted it at the last minute.

Fingerhut and Roth pointed to Hotovely’s speeches at New York University and Columbia University this week as proof that they are not discriminating against her. Yet according to a senior Foreign Ministry source, ministry staffers had to fight to get those events scheduled. And once they were scheduled, Hillel refused to widely publicize Hotovely’s speeches.

Only 10 students were invited to attend her lecture at Columbia. And only 40 students attended her unpublicized event at NYU.

Hillel’s desire to make light of its discrimination against center-right Israelis is eminently sensible.

The vast majority of American Jews support Israel. It wouldn’t do for pro-BDS Hillel directors to parade their hostility to the Jewish state in public.

It makes much more sense to simply block pro-Israel speakers from appearing on campuses.

Likewise, Jewish radicals who oppose civil rights protections for Jewish students beset by antisemites who express their Jew-hatred as anti-Zionism are reasonable to pretend that they are simply freedom of speech champions.

After all, professors like Trachtenberg who call for the boycott of Israeli universities while claiming that Zionists are inherently disloyal to their countries of citizenship wouldn’t want to be accused of trucking in antisemitism.

The fact that Hillel directors like Roth and radical professors like Trachtenberg, Kelman and Nadell do not reflect the views of the wider Jewish community or even of the Jewish students on their campuses does not mean that they do not pose a grave threat both the American Jewish community and to Israel.

First, by pretending that it is legitimate to block senior Israeli officials from addressing students, they block US Jewish students from basic knowledge about Israel and the views of the majority of Israelis who democratically elect their representatives.

Second, by permitting the slander of the likes of Hotovely and Reservists on Duty, these campus Jewish leaders and professors cultivate ignorance among Jewish students while emptying the term pro-Israel of all meaning. In in their zeal to promote anti-Zionist libels and activism, they empower ignorant students to blithely and falsely slander Hotovely and other senior officials as “racists.” By extension, they libel the entire nation of Israel whose citizens democratically elected their Knesset representatives and government.

If these actions continue, a significant diminishment in levels of support for Israel among American Jews can be expected in the years to come.

Most perniciously, in pursuit of their agenda, these radical Jewish leaders and academics seek to deny adequate civil rights protections for American Jews. By claiming that the most significant form of antisemitism on college campuses – antisemitism rooted in hatred of Israel and its supporters – is not antisemitism, and by lobbying to prevent the Antisemitism Awareness Act from being passed into law, they are working to undermine the civil rights protections of American Jewry.

For instance, in September, backed by deep-pocketed donors, BDS activist David Myers was appointed head of the Center for Jewish History in New York.

Myers is a member of several BDS groups including Jewish Voices for Peace, J Street, the New Israel Fund, and If Not Now. Kelman and other anti-Zionist Jewish academics applauded his appointment.

Myers’ animosity toward Israel is reflected in his scholarship. Justifying anti-Zionism is a major focus of his work. He has authored sympathetic articles about the anti-Zionist Satmar Hassidic sect.

When considering how to stem the growing power of anti-Israel and antisemitism-enabling Jews in the American Jewish community, it is worth considering the response to Myers’s appointment.

When the Center for Jewish History announced his hiring, a small coalition of pro-Israel activists organized protests against it. True, the demonstrations failed to cancel his appointment. But the instinct that informed them was correct.

Israel advocates – supported by the Israeli government – should oppose the hiring and advocate the firing of anti-Israel activists in major Jewish groups. For instance, following her discriminatory treatment of Hotovely, Israel should demand that Hillel International fire Roth and replace her with a pro-Israel Jewish professional.

So, too, Trachtenberg and professors like him who truck in antisemitic propaganda masquerading as academic research should not be given a free pass.

Pro-Israel activists should file complaints with his university for his advocacy of antisemitic positions is sworn congressional testimony.

The abuse Hotovely endured this week was a symptom of a much larger problem. A small but powerful minority of American Jews seeks to silence Israeli voices, as part of a larger movement to deny civil rights protections to pro-Israel American Jews. To defeat these efforts both the symptom and the disease must be fought relentlessly.