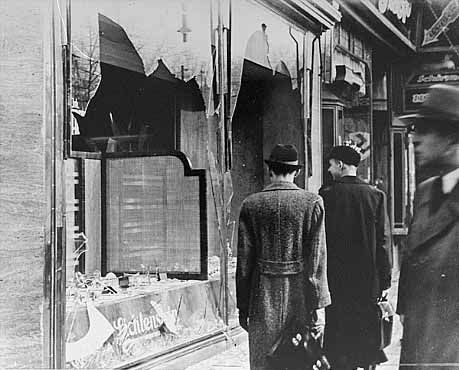 The resurgence of anti Jewish manifestations thinly disguised as anti Israel protests and the anniversary of Kristallnacht should remind us of the lessons which still need to be learnt…writes Michael Kuttner.

As thousands gather to commemorate the anniversary of the night of broken glass how many will connect the dots and realise that the same virus which laid the groundwork for this pogrom is incubating in our very midst today?

Who would have imagined after the horrors of the Holocaust were finally revealed in 1945 that in 2017 Jews would once again be facing hate and demonisation? This time in addition to plain old hatred of Jews it also comes crudely disguised as hatred for the Jewish State.

The seeds of delegitimisation germinated on the fertile soil of Europe then as they do also currently. Once it was mainly theologically based, something which except in certain circles has now waned. However the universities, academia and the media are once again in the forefront of promoting distorted fake material masquerading as news. The power of social media these days guarantees world-wide audiences something which was not possible back in the past when Jew-haters spread their poisonous lies. Untruths and manipulated facts as a result reach audiences which in the 1930’s were isolated from such hate.

As a prelude to Kristallnacht the universities and certain parts of academia had already shown their true colors. Jewish students and staff had been systematically targeted for virulent physical and verbal abuse. Their lives had been made miserable and gradually the point was reached when their presence on a campus became life threatening. Delegitimization and demonisation went hand in hand. I remember my late father telling me about how dangerous things became for Jews at his university. The edict expelling all Jewish students and faculty was only a matter of time. With some exceptions when the day arrived and Jews were finally thrown out of universities their former friends and colleagues lined up to help them on their way.

We haven’t yet reached that stage but surveying the university scene in the UK, Europe and even the USA today one cannot but be troubled by what is brewing. There are some campuses where expressing open support for Israel is a red flag and guaranteed to attract violent reactions. In others, faculty (some Jewish) are leading the anti-Israel charge. Student unions at many universities have been taken over by far left and misnamed “progressives” making membership for Jewish students who stand up for Israel extremely problematic. We now have the phenomenon where “progressive” students pressure university administration and even Jewish student groups to ban speakers they do not approve of. Thus Israel’s deputy foreign minister was prevented from speaking to students at Princeton because Jewish “progressives” objected and Hillel who had invited her caved in to blackmail tactics.

Self-loathing Jewish individuals, often with a fairly remote (if at all) connection to the Jewish community have always existed but in recent times, especially in the USA, they have blossomed. The refusal to stand up and challenge these types who find enthusiastic and natural allies among the Jew-haters parading as Israel-haters is a rerun of past history. We should be very concerned about this especially as we commemorate recent past events.

A boycott of Jews was always a favorite sport. Today the European Union is a leading advocate of such activity. Their blacklists of companies doing business or based in parts of Israel they wish to be Judenrein is merely an extension of past boycotts of Jewish businesses. Melanie Phillips in her inimitable direct non politically correct way of speaking described the UK today as the hub of BDS and Israel haters. She was speaking at the Knesset on the occasion of a day devoted to commemorating the centenary of the Balfour Declaration. Unfortunately the UK ambassador had departed the hall by the time Melanie spoke.

We all know where boycotts lead to. The path from boycotts to destruction and defacing of Jewish property via book burning and cemetery desecrations is a short and direct one. Been there and done that.

The power of the media to spread and propagate distorted news is one of the biggest challenges we face today. Prior to and after Kristallnacht the German Propaganda Minister utilised radio and newspapers to demonise Jews most effectively. Today’s media does an equally effective hatchet job. A recent example should suffice to illustrate the situation. No doubt you can quote many more.

Sky News Online posted a photo of a religious Jew praying Shacharit (morning service), wearing tefillin (phylacteries) and holding a prayer-book. He was depicted standing on a hill overlooking the Cave of the Patriarchs in Hebron. All this was clearly evident to anyone with any knowledge. What was the caption that Sky News used to explain this photo to the unwashed public?

“An Israeli settler reads a holy book as he overlooks the Ibrahimi Mosque.”

In one fell swoop Sky News managed to malign a Jewish person praying by using the pejorative word “settler.” Then they compounded this assertion by naming the site a Mosque without mentioning that in fact it is the burial place of the Jewish Patriarchs and Matriarchs which existed long before the advent of Islam. By deliberately doing so they implanted into the minds of readers the false notion that this illegitimate Jew was praying towards a Moslem holy site which has no Jewish connection whatsoever. It is this sort of daily news manipulation which lays the groundwork for demonisation and delegitimisation so faithfully followed by the media in Europe not so long ago.

Finally, here is a link to a most powerful documentary produced by the BBC and aired a few days ago to commemorate Kristallnacht. All you need to do is replace the word Jews with Israel and you will get an eerie reminder of what it is we face today.

The difference of course is that now we have a Jewish State which can defend us and Jews need no longer feel helpless and powerless.