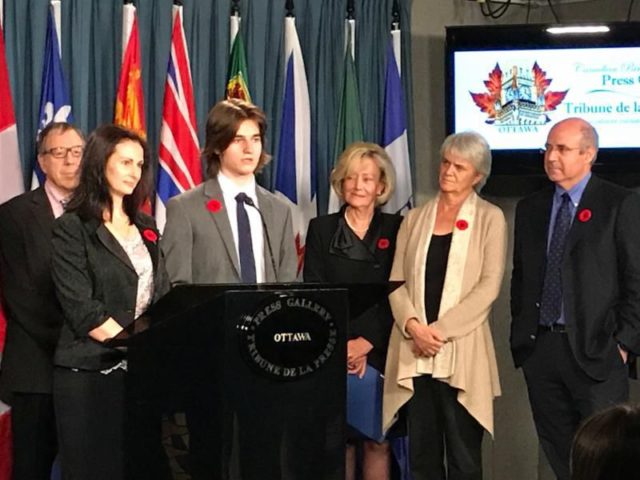 Former justice minister Irwin Cotler is urging Canada to use its influence to persuade other countries to adopt a so-called Magnitsky law, which is named after the whistleblowing Russian lawyer who died in prison under murky circumstances.

In October, the House of Commons unanimously passed a bill called the Justice for Victims of Corrupt Foreign Officials Act. The legislation allows the federal government to impose travel bans and freeze the assets of corrupt officials and other foreign nationals who have committed “gross violations of internationally recognized human rights.”

On Nov. 3, Canada used the new law to impose sanctions on 30 Russian officials who were involved the case of Sergei Magnitsky, as well as numerous Venezuelan officials, including President Nicolas Maduro, and certain officials in South Sudan.

The act was inspired by a private member’s bill that Cotler tabled in 2011, which called for justice against Russian officials who, it is believed, were implicated in Magnitsky’s death in 2009.

Critics, like Cotler, allege that Magnitsky was mistreated and tortured because he had exposed official corruption.

Cotler, who now serves as the chair of the Raoul Wallenberg Centre for Human Rights, said Canada must become “a global leader in mobilizing the community of democracies to adopt such legislation in the pursuit of justice, and in combating the cultures of criminality and corruption, underpinned by the culture of impunity.”

“We must hold major human rights violators – wherever they are – to account,” he added.

The United States adopted a Magnitsky law in 2012, but other democracies have been slow to follow suit.

Cotler joined parliamentarians from all parties when Magnitsky’s son, Nikita Magnitsky, was in Ottawa recently, to celebrate the passage of the act. He was joined by Magnitsky’s client, William Browder, an American who ran the largest investment fund in Russia and was an outspoken critic of management practices in that country, some of which are controlled by the state.

Magnitsky brought forward evidence of a massive conspiracy on the part of the police, which allegedly defrauded the Russian government of taxes that Browder’s company, Hermitage Capital Management, had paid. Magnitsky was arrested for tax fraud, but never brought to trial, nor was anyone ever charged in connection with his death.

At the press conference with Nikita Magnitsky on Parliament Hill on Nov. 1, Cotler hailed “the singular heroism of Magnitsky and the resilience and courage of his family.” He also recognized Browder’s “steadfast commitment and courage, in pursuing the adoption of this legislation” around the world.

He commended Senator Raynell Andreychuk and MP James Bezan for shepherding the bill through Parliament, and Foreign Affairs Minister Christia Freeland for introducing the legislation.

Cotler added that, “At this moment, I want to remember Boris Nemtsov, who stood with me here in 2012 and became a global advocate for Sergei Magnitsky, until he was murdered in February 2015.”

Cotler also paid tribute to Russian intellectual and dissident Vladimir Kara-Murza, who testified in favour of the legislation before Parliament and continued to advocate for its passage, despite being the target of two assassination attempts.

While there is no indication that he is on Russia’s blacklist, Cotler told The CJN that he would regard it as “a badge of honour” if he was.

He was, in fact, banned from the Soviet Union at least three times, starting in 1979 for his advocacy on behalf of Natan Sharansky and Andrei Sakharov.

That was rescinded with the dissolution of the Soviet Union, but in March 2014, he was among 13 people who were excluded from entering the country, in retaliation for Canada’s sanctions against Russia over its aggression in Ukraine.

Whatever his disagreements with officialdom, Cotler said, “I remain an advocate for the Russian People, and my solidarity with them continues.”