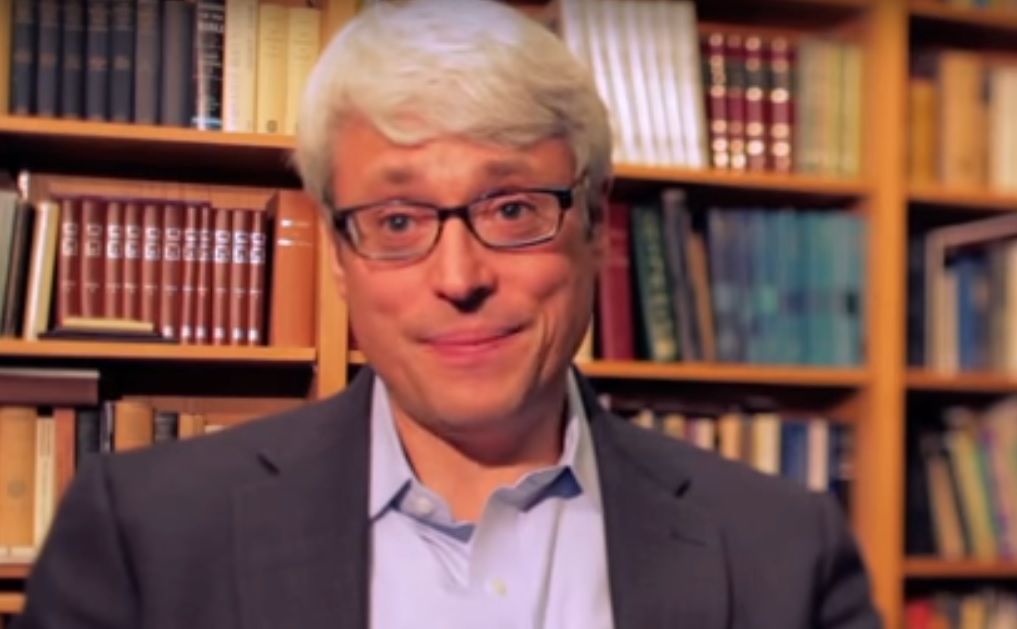 I read your speech to the CCAR convention in the Summer 2017 issue of the CCAR Journal available at H. U.’s Main Mt. Scopus Library. At first, I could not believe what I read.  But it certainly explains that act of Jewish anti-Semitism coming from Princeton Hillel.

Most Israeli Jews would have felt it unbelievable that you, in your important position, would list the major issues facing the Jewish People without including the major problem facing the world, the transformation of a relatively tolerant monotheistic religion, Islam, into a conspiracy to end Western Civilization.   (This process began when the British appointed Al Husseini as Mufti of Jerusalem.)  Rather than worrying about terrorists killing Jews and other victims, you worry about the practically non-existent problem of Islamophobia. If I knew any Israeli Jew considering joining the Reform Movement, all I would have to do is show him the bottom paragraph on page 55 of that issue of CCAR Journal, and he or she would not consider further joining you.

You and the bulk of American Reform “Rabbis” that elected you appear to believe the four lies discussed in the attached letter to Princeton Hillel   And so you have insured that there is no real future for the Reform Movement in Israel.  And sooner or later, most American Jews will catch on, and there won’t be a future in North America either.

.cc. to the Princeton University President, Princeton Chabad (with thanks) Princeton and MIT Hillel, and others

PS:  I think that if Rabbi Stephen Samuel Wise and Rabbi Abba Hillel Silver were alive today, both would be happy to sign this letter.

“But while the tzuris faced by past gatherings might give us perspective, it makes no less accurate the theme of this convention.  We do serve as rabbis in a turbulent time, and that feels like an understatement. We all know the litany.  Civil discourse in America has disintegrated.  Civil rights are under siege, the rights of women, of minorities, of our LGBTQ brothers and sisters, the right and capacity of news organizations tell the truth,   Racist, white nationalism has moved from the fringes of society to a frightingly hospitable center.  Islamophobia continues to escalate, and with each desecrated cemetery and bomb threat, the number of anti-Semitic in 2017 continues to increase.”

I was horrified to learn that you cancelled the appearance of the Foreign Minister of Israel at Princeton’s Hillel House.  Once the invitation was made, cancelling was definitely an act of “Jewish Antisemitism.”  One with the Berlin Reform synagogue that hosted that Nazi flag at the time of Hitler’s assumption of power, the Jewish advisors to President Roosevelt who advised against lowering barriers to European Jewish immigration because “It could increase USA antisemitism,” and the New York Times owner who replied to Rabbi. Stephen S. Wise’s complaint about an editorial praising Hitler’s economic reforms with “We do not believe in Jewish Tribalism.”  I sincerely hope you will be reprimanded by Hillel’s National Office.

By way of background, my Aunt Leah Klepper, my first Hebrew teacher, taught at JTS for 35 years before taking up teaching English and English and American literature at the Tel Aviv New School (Derech Haifa) in 1950. (She passed on after five years in the Nophim Jerusalem retirement home in December 1989.)  I was active in Hillel (then located near Harvard) and ran the Student Jewish Appeal at MIT for two years while an undergraduate.  My cousin Danial Wilkes was active in Princeton Hillel, and I visited and participated in Princeton Hillel activities, 1950, 1951.  I served as acoustical consultant for several important Princeton University projects, including the acoustical improvements to the University Chapel on the occasion of the organ renovation.  I am a co-author, with Chalmers U. Emeritus Professor Mendel Kleiner, and Albany Diocese Catholic Priest Rendell Torres of the book, Worship Space Acoustics, J. Ross, publishers, Fort Lauderdale, 2010.

Did both of you listen to the talk at Chabad House?  Did any of the Hillel-active Jewish students who protested against the Minister’s talk at Hillel attend that talk and listen?  If not, then you have worked against academic freedom as well as against the welfare of the Jewish People.

The Jewish students who protested believe all or most of four lies, four downright factually disprovable lies:  1.  “The State of Israel is a response to the Holocaust.”   2.  “Jewish settlement building makes the internal Muslim problem of Islamic fundamentalism and its terror worse.  3.  “Settlements oppress ‘Palestinians’ through separate roads, check-points, curfews, and Israeli Police activity.”  4.  “An immediate move to an independent Palestinian State will help bring peace. End the Occupation!”  Possibly you also believe those lies.  I feel privileged to be able to provide answers.

.1.  “The State of Israel is a response to the Holocaust.”   Answer, The Romans did not drive all Jews from the Holy Land, and in some parts, like Safed and Tiberious, Jewish settlement was continuous.  This was also true of Hebron up to the 1929 riots.  Muslims invited seventy Jewish families to return to Jerusalem after driving out the Crusaders.  (They also allowed certain Monasteries and Convents to continue to function.)  The Caliph of Jerusalem came to the Jaffa dock to welcome Jewish refugees from Torquamada’s Spain in 1492.  The Muslim Turks gave Jews the right to pray at the Western Wall, a right the British removed in 1938, but was returned by Jerusalem’s Unification in 1967.  There was no “Palestinian” representation by that name in the Turkish Parliament before WWI, but there was a representative of the Jews of the Holy Land.  (For many years it was Rabbi Eliyahu Navon, Chief Sephardic Rabbi of Jerusalem.  His son, Joseph Nevon, who studied engineering in France, got the approval in 1888 in Istambul to build the Jaffa – Jerusalem railroad, actually built by French construction company, and first opened in 1892.) King Feisel of Iraq told the League of Nations he welcomed Jewish immigration to the Holy Land.  Thus, on the basis of the Balfour Declaration, the British got the Mandate; then their Colonial Office decided to do its best to undermine that declaration.  Jews have always prayed facing Jerusalem and prayed for the rebuilding of the Holy Land.

.2.  “Jewish settlement building makes the internal Muslim problem of fundamentalism and its terror worse.”  Answer: There was always a strain of fundamentalism in Islam, but it was the appointment of Hajj Amin Husseini as Mufti of Jerusalem by the British, a man who has already began corresponding with Hitler, that injected extreme hatred into Islam.  Christian colonialists did not realize that hatred breeds hatred, with hatred of Christians a natural product of the drastic changes Husseini made in Islam, changes implemented throughout the Muslim world.  Islamic fundamentalism came before the State of Israel, and its opposition to Jewish settlement anywhere in the Holy Land is largely based on that fundamentalism.  The few moderate Muslims that dare speak out know that  Imam Pelazzi of Rome has written that the Koran specifically authorizes Jewish settlement, and it is the duty of Muslims to help!  (Apparently, King Feisel understood that.)  I can suggest that you check Surahs 5-21, 7-137, and 10-93, of the KORAN for yourself.  If the cause, Islamic Fundamentalism, had been recognized as the major problem preventing Arab-Israeli peace, at the time of Madrid and Oslo, reduction of this fundamentalism would have also prevented ISIS and reduced much of the turmoil in general that has occurred in the Middle East., as well as making an Israeli-Arab peace possible.

.3.   “Settlements oppress ‘Palestinians’ through separate roads, check-points, curfews, and Israeli Police activity.”  Answer:  `Would any of these exist if “Palestinian” leaders, PLO and Hamas, didn’t teach  that terrorism is the finest occupational calling and that violence against any Israeli Jew, child or adult, civilian or military, male or female, old or young, is to be rewarded?  Jewish partisans fighting the Nazis did not attempt to kill German school-children.  Israeli underground fighters did not attempt to kill British school-children and neither did the Irish Republican Army.  Algerian Muslim revolutionaries did not attempt to kill French school-children.  It is the “Palestinian” leadership that oppresses their people by teaching them terrorism as the goal of life.  Terrorism has been taught in UN-supervised schools in refugee camps for years.  In 1996, Arafat removed the Jordanian textbooks that Israel had used since 1967 and substituted the anti-Semitic ones, mostly printed then in Saudi Arabia, that had been used in the terrorist-run, UN-supervised refugee camps.  Textbooks that Isis uses today.  Textbooks using large amounts of material translated from those used by the Nazis.  Bill Clinton and the Israeli left government did nothing.

.4.   “An immediate move to an independent Palestinian State will help bring peace. End the Occupation!”  Answer:  Israel left all the facilities for an excellent agricultural economy when it left Gaza.  The first thing the leadership did there was to destroy the hot houses and farm machinery and to use the scrap to start making weapons to attack Israel.  Given the nature of “Palestinian” education, we can expect the same from such a move from the West Bank.  But the violence would not start then.  There were 8,000 Jews living in Gaza.   There are 300,000+ Jews living in areas ruled by Jordan 1948-1967, areas where there were Jews living before 1948.  If they were Muslims or Christians you would allow them to build hones for their children, but not Jews.  Who, exactly is going to force these people to leave?   A separate and independent “Palestinian” state needs first a population and leadership that recognizes the right of Jews to share the Holy Land.  The description “Palestinian” is in quotes, because the Romans, when pagans, gave the name Palestine to the Holy Land to honor the extinct pagan Philistines.  The British used that name, and indeed the Jewish Brigades in WWI and WWII, Jewish soldiers from the Holy Land, were called Palestinian Brigades.  (Abbas is teaching children they are descendants of the Philistines, not Abraham and Ishmael!)  They are Ishmaelites, in Arabic Issmaelin.  And I try to adopt Abraham’s love for Ishmael, King David’s love for Absolom, the Father’s love for his Prodigal Son in Luke, when thinking about Arab terrorists.  They have had bad leadership, and your cancellation cheers that bad leadership on.

Would a bright Jewish student’s parents wish to send her or him to Princeton with such “Jewish Leadership” on campus?