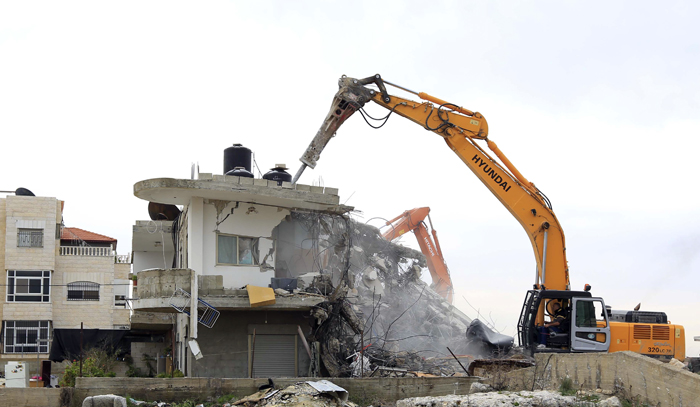 Incentives for terror include having your house rebuilt after its demolition. Best real estate deal in the Middle East.

Imagine the scene. A teenager wakes up in a crowded family home in Halhoul, near Hebron. Parents scream at him that he is an able bodied young man, and that he should go out there and make a living, and make earn money for the family to acquire a new home.

So, what does the young man do? He does just that. He takes the family car and rams it into two Jewish pedestrians, knowing that new rules of IDF engagement are that Israeli soldiers will not kill him. The IDF will, however, destroy his rickety family home, only to have the Palestinian Authority pay for a new home. At a young age, he learns never to say that “crime does not pay”.

A case in point: this past Friday morning, A 17 Arab year old used his family car ram 70-year-old man, just outside of Efrat, and was lucky to escape with minor injuries. The driver sped on to ram another Jew at the Gush Etzion junction, this time mauling the 35-year-old father of five children – now in critical condition.

The 70-year old’s first response to the media was to comment on the big, wide smile that the Arab teen was sporting as he tried to kill him.

First things first, it has been widely published in the Arab media that the IDF no longer tries to kill potential homicide attackers. Indeed, the IDF only wounded the assailant. Critically, but not fatally.

Yet there was another reason for the smile on the face of the Arab assailant.

Only a few hours after these two attacks, the IDF dispatched a team to make plans to demolish the home of the terrorist who is now recovering from his wounds in an Israeli hospital.

Why an IDF demolition of his home bring a smile to the face of the assailant?

As part of the program to provide incentives for terror, the PA offers to construct a new home in its stead.

In other words, demolition of terrorist homes is now a new incentive to terror.

The Israel Civil Administration spokesperson confirms that after any terror attack, the PA facilitates new investment for new homes, compensation from the PA and new aid from the EU.

What, then, should people of Israel do?

Top lawyers confirm that the PA can be sued as an accessory to murder, since it provides a financial incentive for a 17-year-old to go out and to kill.

Banks in Israel which facilitate PA payments to killers can be sued.

Israeli banks which enable the PA to forward gratuities for those who commit acts of murder can be held accountable in an Israeli court of law.

The IDF Civil Administration, also known as COGAT, which runs Judea and Samaria, will not help anyone sue the PA terror regime, defined by the government of Israel since 1993 as a “peace partner”

The writer is director of Israel Resource News Agency and heads the Center for Near East Policy Research, and the author of “Genesis of the Palestinian Authority “and “Roadblock to Peace: How the UN Perpetuates the Arab-Israeli Conflict: UNRWA Policies Reconsidered”.