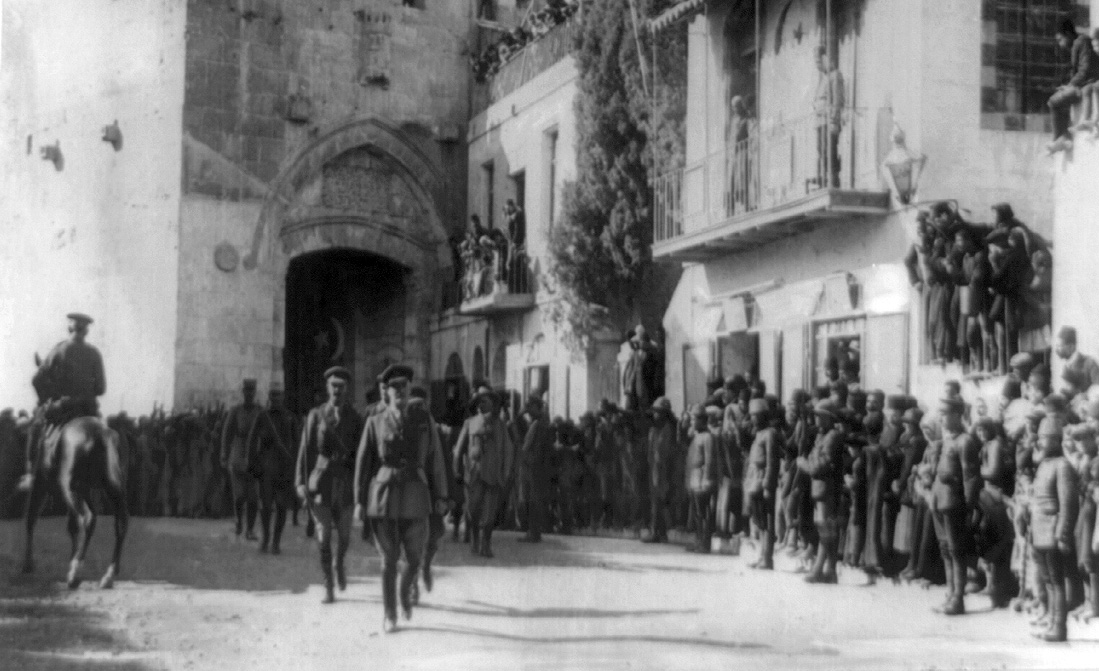 Actually, a Jerusalem delegation, led by the mayor, surrendered the city to a pair of British army cooks on December 8. Thus began a comical farce of who received the surrender of the Holy City.

The Turkish army and their German commanders had fled the city ahead of the British advance, leaving the city officials nervously waiting for the liberators.

The first uniformed men to arrive were privates Andrews and Church, two cooks who got lost while searching for cooking water. They wandered near the Jaffa Gate entrance to the Old City and were confronted by a large delegation of city officials. The cooks were so scared they ran back to their unit.

At 8 a.m., the following morning, James Sedgewick and Fred Hurcomb, two British sergeants, were scouting around the Old City walls when they were approached by a group of Arab dignitaries holding a white flag. The two soldiers were overwhelmed by the sudden responsibility of accepting the surrender of Jerusalem that, after pictures were taken for posterity, they apologized saying they were unable to accept the surrender but promised to send a more senior officer.

Later the same day, two artillery officers, Majors Beck and Barry of the 60th Division, were met by a party of officials and asked to accept Jerusalem’s surrender. Again, they politely refused by saying they had to bring one of their superiors.

Shortly after their departure, a Lieutenant-Colonel Bayley, commander of the 303rd Brigade of the 60th Division arrived. He wrote, “Arriving at the top of the road within sight of the Jewish Hospital in Jerusalem and with my three battery commanders I was amazed to see a white flag waving and a man coming towards me. He said the mayor of Jerusalem was with the white flag. We sat on chairs outside the Jewish Hospital and he informed me that the Turks had left Jerusalem heading towards Jericho.”

Bayley sent a message to the 60th Division headquarters informing them that he had just accepted the surrender of Jerusalem and that he was waiting for a general to come and take over the city.

Brigadier-General Charles Frederick Watson, the commander of the 180th Brigade of the 60th Division, who Bayley referred to as “an awful little ass who wanted to be the first to get there,” insisted that the mayor again surrender the city to him. Watson was the first British officer to enter the Old City and a photograph exists of him astride his horse inside the Jaffa Gate. Watson got the mayor to sign the white flag which can be found at the Imperial War Museum in London.

That was not the end of the comical chain of events. General Shea, commander of the London Division, arrived on the scene and demanded that the mayor surrender the town to his unit.

General Allenby, a man of quick temper, was not happy. As Commander-in-Chief of the British Army, it would be him, and him alone, that would officially accept the surrender of Jerusalem.

On December 11, 1917. General Edmund Allenby rode to the gates of the Old City, dismounted, and led a phalanx of officers through the Jaffa Gate entrance to the David’s Citadel where he addressed a large crowd of Jerusalemites.

He deliberately chose to walk into the Old City because, he said, only the Messiah should ride into the Holy City.

Among the officers marching behind him was T.E. Lawrence, known later as Lawrence of Arabia. Despite his exploits on the other side of the Jordan River, he was to write of his Jerusalem experience, “This was to me the most supreme moment of the war.”

General Allenby, from the platform of the David’s Citadel, read out a proclamation;

“To the inhabitants of Jerusalem the Blessed, and the people dwelling in its vicinity. The defeat inflicted on the Turks by the troops under my command has resulted in the occupation of your city by my forces.

I therefore, here and now, proclaim it to be under Martial Law, under which form of administration it will remain so long as military considerations make it necessary.

However, lest any of you should be alarmed by reason of your experiences at the hands of the enemy who has retired, I hereby inform you that it is my desire that every person should pursue his lawful business without fear of interruption.

Furthermore, since your city is regarded with affection by the adherents of three of the great religions of mankind, and its soil has been consecrated by the prayers and pilgrimages of devout people of those three religion for many centuries, I make it known to you that every sacred building, monument, holy spot, shrine, traditional site, endowment, pious bequest or customary place of worship, of whatever form of the three religion, will be maintained and protected according to the existing customs and beliefs of those to whose faith they are sacred.

Jews of Palestine, the Jewish Legion who fought in the 38th and 39th Regiments of the British Army, had fought and died fighting alongside their British and ANZAC comrades to drive the Turks out of the land. The Jews of the NILI espionage network risked their lives, were tortured and hanged, to bring vital intelligence to the British which led to this victory.

The Arabs of Palestine, west of the River Jordan, did not express any national longing throughout the Palestine Campaign, nor did they fight for national rights to the land. Asked why they did not lift a finger to help remove the Turkish yoke from their impoverished necks, Arabs would look up to the heaven and declare it was all up to Allah. When a mighty British commander by the name of Allenby marched into the Old City to liberate them from the Turks they were awe-struck.  Allenby, in Arabic was “Al Nabi,’ the prophet of god. To the Arabs of Palestine, Allenby’s victory was Allah inspired. We know it was inspired by the sacrifice of British, Australian, New Zealand, Indian, and Palestinian Jewish fighters.

The liberation of Jerusalem on December 11, 1917, exactly a century ago, was the final act in a triumvirate of three significant historic events that year, the other two being the Balfour Declaration and the victory at the Battle of Beer Sheba. During this auspiciously short period, Christian Zionist politicians, generals, soldiers, and Jewish spies in Palestine, forced open the door that paved the way for the restoration of the land of Israel for the Jewish people.

That door began to close by 1919 when Jew hating British administrators, brought up to Jerusalem from Egypt, reneged on their duty to carry out orders. In a treasonable act of defiance and anti-Semitism, they ignored official British policy.

General Money, the Chief Admini strator, ordered that “The walled city of Jerusalem is placed out of orders to all Jewish soldiers from the 14th to the 22nd April inclusive.”  It was no coincidence that this period was the pilgrim festival of Passover. This outraged Colonel John Patterson, the commanding officer of the Jewish Legion, who wrote, “I cannot conceive a greater act of provocation to Jewish soldiers, or a greater insult. Not since the days of Emperor Hadrian had such a humiliating decree been issued.”

The Balfour Declaration stipulated that His Majesty’s Government would use their “best endeavours to facilitate the establishment in Palestine of a national home for the Jewish people.”

Instead, in 1920, they defied British policy, ignored their duty to implement the terms of the Declaration, and duplicitously colluded with anti-Jewish Arab rabble-rousers, including Haj Amin al-Husseini, later to meet with Adolph Hitler to plan the Final Solution of the Jewish Problem in the Middle East, to incite violence against Jews. They chose the annual Nebi Musa festival to riot in the Old City while the British stood aside.

With cries of “Death to the Jews!” Jewish women were raped, men were killed, and Jewish property destroyed. This British and Arab anti-Semitic collusion and violence was the first major Palestinian act of terror attack against Jews.

With typical British “even-handedness,” Ze’ev Jabotinsky, who had been an officer in the British army, was sentenced to 15 years’ imprisonment for illegal possession of firearms, namely three rifles and two pistols, despite the fact that the Governor, Colonel Ronald Storrs, was aware that he possessed them. This was the same sentence imposed in absentia on Al-Husseini who had fled Palestine, following the Arab murder and rape of Jews and the destruction of Jewish property.

The rest is history.

Barry Shaw is the author of the best-selling book ‘1917. From Palestine to the Land of Israel.’ He is also the Senior Associate for Public Diplomacy at the Israel Institute for Strategic Studies.