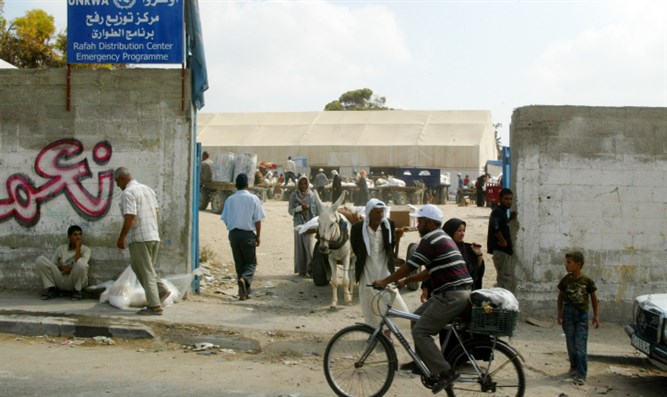 Yochanan Visser is an independent journalist/analyst who worked for many years as Middle East correspondent for Western Journalism.com in Arizona and was a frequent publicist for the main Dutch paper De Volkskrant. He authored a book in the Dutch language about the cognitive war against Israel and now lives in Gush Etzion. He writes a twice weekly analysis of current issues for Arutz Sheva.

Last week, both President Donald Trump and Nikki Haley, the US ambassador to the U.N., indicated that the administration was considering completely cutting off US aid to the United Nations Relief and Works Agency for Palestine Refugees in the Middle East (UNRWA).

On Friday, TV Channel 1 in Israel reported the US administration would freeze roughly a third of the American aid to UNRWA.

The decision was reportedly taken after the Israeli government asked the US to gradually reduce its contribution to UNRWA in order to force the organization to reform and to wean the Palestinian Arabs of the extensive aid the largest UN organization provides to roughly five million Palestinian “refugees” and their descendants.

The U.S. was expected to transfer $125 million to UNRWA on January 1.

However, as both Trump and Haley made clear, the United States is changing its approach towards the Palestinian Arabs after Palestinian Authority leader Mahmoud Abbas harshly criticized the Trump administration during an emergency summit of the Organization for Islamic Cooperation in Istanbul last month.

Abbas, who called Trump’s decision to recognize Israeli sovereignty over Jerusalem “the greatest crime”, later announced he would no longer cooperate with Trump officials on the non-existing ‘peace process’ and no longer considered the U.S. an honest broker.

Trump shot back via Twitter last week and said the Palestinian Arabs receive hundreds of millions of dollars from the U.S. annually but show “no respect or appreciation” in exchange for the extensive American aid.

Last year, the US, which is the largest contributor to the organization, transferred $368 million to UNRWA, more than a third of that organization’s annual budget of $1.2 billion.

According to Israeli pundits and experts, including IDF officers, halting US aid to UNRWA altogether will cause a humanitarian catastrophe, and in particular in Gaza, where 1.3 million Palestinian refugees and their descendants are dependent on UNRWA aid.

Some members of Prime Minister Netanyahu’s cabinet disagree, however, and openly criticized the Israeli Foreign Ministry (IMFA) for trying to convince the US not to cut off American funding to UNRWA.

Take for example Public Security Minister Gilad Erdan who fired off a tweet expressing his astonishment on the position of the Israeli Ministry for Foreign Affairs (IMFA).

“I find it hard to believe that the Foreign Ministry of Israel opposes a cut to UNRWA – the body that perpetuates the refugee problem instead of solving it and that aids terror in all kinds of ways that have been proven – we have to dismantle it as quickly as possible,” according to Erdan.

Education Minister Naftali Bennett also issued a statement in which he said UNRWA is a terror-supporting organization which employs Hamas terrorists “and uses its schools to hide rockets.”

“Its very existence perpetuates the dire situation of Gaza’s population, who suffer under the rule of Hamas,” Bennett said adding that, “aiding the residents of Gaza should be no different than aiding the Syrian residents suffering under a terror regime, or from aiding any other group of descendants of refugees.”

Bennett’s opinion sharply differed from former Israeli FM Tzipi Livni who fired off a tweet demanding the Israeli government lobby the Trump Administration for holding up the massive US aid to UNRWA.

“A responsible and serious government would sit quietly and discreetly with the US president and explain Israel’s interests,” according to Livni.

This all begs the question of who’s right on the issue of cutting off funding to an organization whose sole task is caring for the Palestinian refugees in Lebanon, Syria, Jordan, Gaza and in Judea and Samaria.

Let’s first take a look at how UNRWA interprets its role as a provider of humanitarian aid to the roughly five million Palestinian Arab “refugees” and their offspring.

UNRWA spokesman Chris Gunness made it clear time after time that he views the UN organization as a patron for the Palestinian national cause and expresses his anti-Israeli views on virtually every occasion.

In 2016, Yair Lapid, the leader of the left-leaning party Yesh Atid, took Gunness to task over his pro-Palestinian bias and UNRWA’s role in perpetuating the Palestinian-Israeli conflict.

“If you condemn violence, why were you silent when it became clear that a UNRWA building was used as a hiding place for a terrorist tunnel used to kill three Israeli soldiers?,” he said in a reference to an incident during the 2014 summer-war between Hamas and Israel.

“Why are you silent when gays are persecuted and a church’s burned down in Gaza?” Lapid continued.

“Why are the Palestinians the only people in the world who can inherit the status of refugee from their parents? Why can someone be born in Qatar, live in a villa in Paris, hold a Spanish passport and still be considered a Palestinian refugee?” the Yesh Atid leader asked Gunness.

“Why is it that among the 23,000 UNRWA employees there are so many Hamas people,” Lapid asked while adding that the head of UNRWA himself admitted Hamas members were working for the UN-body’s headquarters in Gaza.

Lapid then addressed the fact that only the Palestinian Arabs have their own refugee agency and asked how it was possible the number of Palestinian refugees has grown from roughly 750,000 in 1948 to five million today without a single Palestinian Arab being expelled.

“Is UNRWA creating refugees,” Lapid asked at the time.

The shocking answer to Lapid’s last question finally came last week when the Lebanese Central Administration of Statistics and the Palestinian Central Bureau of Statistics released a census among Palestinian Arabs living in Lebanon.

The census revealed that only 174,422 Palestinian refugees and their descendants are living in UNRWA camps and Palestinian communities in Lebanon while the UN body claims that their number is about 450,000.

Saad Hariri, the Prime Minister of Lebanon, said after the publication of the data that the census ended all speculation about the exact number of Palestinian refugees in Lebanese UNRWA camps and villages but at the same time demanded an increase in aid to the UN organization.

Hariri also vowed Lebanon would never grant citizenship to the Palestinian refugees and demanded they return to Israel under the non-existing “right of return.”

Observers in Israel now demand to know how donor money to UNRWA Lebanon was spent, since the annual budget of each UNRWA branch is based on the number of refugees it takes care of.

If you still doubt something is rotten in the wheelings and dealings of UNRWA, just consider this: UNRWA in Gaza has 12,500 employees who care for just 1.3 million ‘refugees’.

This brings us back to the question if cutting US aid to UNRWA would cause a humanitarian catastrophe among Palestinian Arabs.

The answer is obviously that it would not, because one doesn’t have to be a genius to understand that UNRWA is wasting money (Gaza) and is inflating the number of refugees under its care.

Prime Minister Binyamin Netanyahu has now proposed to dismantle UNRWA and to replace it with UNHCR.

At the start of the weekly cabinet meeting in Jerusalem, Netanyahu said he had made a simple proposal to the US:

“UNRWA suport funds need to be gradually shifted to the UNHCR, with clear criteria for supporting genuine refugees, not fictitious refugees as happens today under UNRWA,” the Israeli leader said.