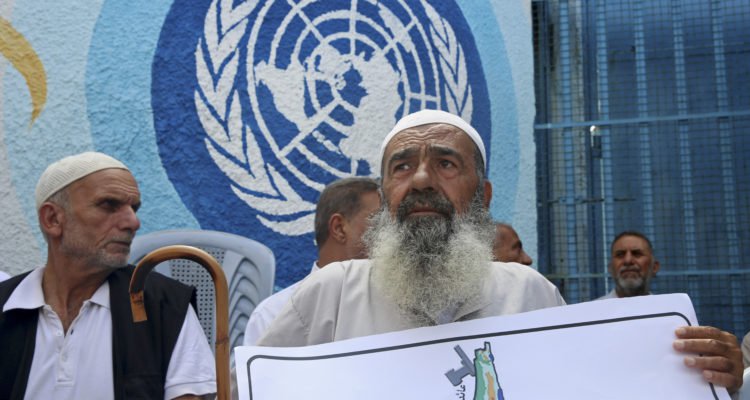 There are conflicting reports coming out of Jerusalem relating to whether Israel favors or opposes proposed cuts in US donations to the United Nations Relief and Works Agency (UNWRA), which supports the Palestinians. Meanwhile, US officials are denying claims that American funds to UNWRA have already been frozen.

A State Department official reportedly told the Times of Israel, “Contrary to reports that we have halted funding to UNRWA, the decision is under review and there are still deliberations taking place.”

Those deliberations are being mirrored here in Israel.

According to a news report by Hadashot TV, Prime Minister Benjamin Netanyahu is privately urging the Trump Administration not to implement the threat. The report indicates, “Behind the scenes, the prime minister is in contact with the Americans in order to prevent the massive cut in US funding.”

Foreign Ministry Spokesman Emmanuel Nahshon told World Israel News (WIN), “We are in favor of withholding UNWRA funds in a gradual approach.” Nahshon added, “It’s a concept at this stage.”

Top government ministers took a different approach. Public Security Minister Gilad Erdan posted on Twitter, “I find it hard to believe that the Foreign Ministry of Israel opposes a cut to UNRWA — the body that perpetuates the refugee problem instead of solving it and that aids terror in all kinds of ways that have been proven — we have to dismantle it as quickly as possible.”

Education Minister Naftali Bennett also took a firm position saying, “UNRWA is a terror-supporting organization. Its very existence perpetuates the dire situation of Gaza’s population, who suffer under the rule of Hamas.”

Bennett called for a unified Israeli voice on the issue, declaring, “I expect all Israeli branches of government, including the Ministry of Foreign Affairs, to support a decision to cut funding to an organization which employs Hamas terrorists and uses its schools to hide rockets.”

Will the US condition UNRWA funds on reform?

David Bedein, a leading Israeli critic of UNWRA who has written extensively on the issue for the Center for Near East Policy Research, told WIN that he does not favor an immediate and total cessation of US funding for UNWRA and prefers a “conditional” approach.

“UNWRA requires an overhaul, total transparency and no funding until they fire all of the terrorists in their employ. The funding must be used as leverage to get change. If the US simply pulls out money some other country will make up for it,” Bedein said.

Bedein favors what he calls a “UNRWA reform initiative” that includes: an audit of donor funds that flow to UNRWA to eliminate duplicity of services and the undesired flow of cash to terror groups; cancellation of the new UNRWA school curriculum, which incorporates principles of Jihad, martyrdom and “right of return” by force of arms, in UN schools; cessation of paramilitary training in all UNRWA schools; and dismissal of UNRWA employees who are affiliated with terrorist organizations.

The United States is UNRWA’s largest donor. In 2016, it contributed $152 million directly to the organization and another $216 million to projects related to its work. According to UNRWA’s donor charts the US contributes about a quarter of the organization’s annual operating budget. Next month the US General Accounting Office is due to issue a report on the alleged indiscretions of UNRWA.