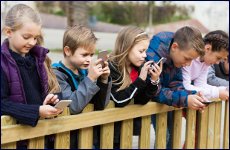 On January 6, two of Apple’s biggest investors published an open letter calling on Apple and other high tech firms to do much more to protect the health of their youngest users. Citing studies showing that smartphones can have grave impacts on kids’ physical and mental well-being, the investors – California State Teachers’ Retirement System and JANA Partners LLC – have opened a major debate, asking tech companies to develop more controls on their products for their youngest users.

What is so bad about kids and smartphones? With more researchers look into the impact of smartphones and other technology on children, here are some recent results, as well as suggestions for what we can do when it comes to protecting kids from smartphone abuse.

The harm that smartphones and other screens do to kids is particularly acute in babies whose brains are still developing. Psychologists call the first three years of a child’s life “the critical period” in brain development because the way that brains grow during these years becomes the permanent base upon which all future learning relies. Receiving information and cues from the real world around them helps babies form neural pathways that make their brains strong and healthy. Stimuli from screens, including tablets and smartphones, get in the way of brains’ normal development, overwhelming their still-developing minds with stimuli.

The damage from too much screen time can be permanent. “The ability to focus, to concentrate, to lend attention, to sense other people’s attitudes and communicate with them, to build a large vocabulary – all those abilities are harmed,” warns Dr. Aric Sigman, an associate fellow the British Psychological Society and a Fellow of Britain’s Royal Society of Medicine.

The ability to interact with other people, to empathize and read people’s feelings all have their foundations in babyhood. Spending time interacting with screens instead of human beings can permanently alter our children’s brain structures, making tasks like forming friendships and understanding the world around them much harder.

While older kids don’t experience the same sort of intense brain development as babies, kids’ and adolescents’ brains continue to develop and can be harmed by too much smartphone use.

The problem is that teenagers’ brains are very adaptable. The experience of using a smartphone, switching rapidly between many activities such as texting and using social media, is associated with lower levels of brain matter in teens’ anterior cingulate cortex, the region in our brains that is responsible for emotional processing and decision-making. Less brain matter in this area is associated with higher rates of depression and addiction.

Another part of our brains, the prefrontal cortex, is necessary for interpreting emotions and for focusing on tasks, and is also harmed by smartphone use. This part of our brains doesn’t fully develop until people’s mid-20s, and excessive smartphone use can get in the way of that. “During our teenage years,” explains Paul Atchley, a psychology professor at the University of Kansas, ”it’s important to train that prefrontal cortex not to be easily distracted. What we’re seeing in our work is that young people are constantly distracted, and also less sensitive to the emotions of others.”

Given the changes smartphones make to developing brain’s ability to empathize with others, it’s no surprise that smartphone use is associated with difficulty in making friends.

For many teens, smartphones can become a crutch in difficult social situations. “When you’re with people you don’t know well or there’s nothing to talk about, phones are out more because it’s awkward,” one Connecticut high school senior explained to researchers.

Yet this “new normal” where smartphones are such a part of social interaction is dangerous, warns Brian Primack, Director of the Center for Research on Media, Technology and Health at the University of Pittsburgh. “There’s strong research linking isolation to depression, and time spent socializing with improved mood and well-being,” Dr. Primack explains. “If smartphones are getting between an adolescent and her ability to engage in and enjoy face-to-face interaction – and some studies suggest that’s happening – that’s a big deal.”

Smartphones and Depression in Kids

Many teachers blame smartphone use for these jumps. Kids used to go outside during lunch break and engage in physical activity and socialization. “Today, many of them sit all lunch hour and play on their personal devices,” one junior high teacher said.

Between 2010 and 2016, the number of adolescents who experienced major depression grew by 60%, according to the US Department of Health and Human Services. Suicides have also increased significantly among kids ages 10 to 19 during that time. “These increases are huge – possibly unprecedented,” explains Prof. Jean Twenge of San Diego State University. She has found that since 2010, teens who spend more time using smartphones and other technology are more likely to report having mental health problems than teens who spend less time with their devices.

Prof. Twenge surveyed over half a million adolescents across the United States; her findings paint a troubling portrait of a generation both addicted to and harmed by smartphone use. Kids who spend three hours a day or more on smartphones or other devices are over a third more likely to suffer at least one suicide-related symptom such as feeling hopeless or thinking about suicide than kids who limit their smartphone and other device use to two hours a day or less. Among kids who used devices for five or more hours each day, nearly half reported experiencing at least one suicide related outcome.

Even moderate smartphone and other high tech use can harm our kids’ mental health, Prof. Twenge has found. Kids who use social media every day are 13% more likely to have high levels of depressive symptoms than those who don’t. In her research, teens who ditched their smartphones some of the time and who spent the most time interacting face to face seemed to be the healthiest emotionally.

Despite the drawbacks of excessive smartphone use, limiting tech time can be difficult. In fact, many psychologists now view smartphone use as an addiction.

This is partly due to the nature of teenagers’ developing brains. The anterior cingulate cortex, mentioned above in its connection to helping teens develop the characteristic of human empathy, is also a factor in decision-making and addiction. “We know for a fact teens have very underdeveloped impulse control and empathy and judgment compared to adults,” explains Dr. Frances Jensen, a professor at the University of Pennsylvania and co-author of The Teenage Brain. As kids brains continue to develop, adolescents and teens are more prone to addiction.

Researchers have also found that the speedy interactions teens enjoy on their smartphones floods their brains with neurochemicals like dopamine, which induces a feeling of euphoria. It also can contribute to addiction, as kids learn to rely on the gratification they feel when they use their phones. Once an addiction develops, teens (and others) can experience feelings of anger, depression, fatigue and distraction when they’re not using their phones.

One rehab center near Seattle now offers therapy for smartphone and technology addiction, and has treated children as young as 13. Hilarie Cash, the Center’s founder, has explained that smartphones and other mobile devices can be so stimulating and all-consuming that they “override all those natural instincts that children actually have for movement and exploration and social interaction.”

Limiting smartphone and other tech use isn’t easy. In fact, in one recent study, teenagers were given a choice: would they rather break a bone in their bodies, or break their phones? It might not come as a surprise to teens and their parents that fully 46% of teenagers said they’d prefer to break a bone than their smartphone.

Yet change is possible. Here are three suggestions for starting to change: both for teens and their families.