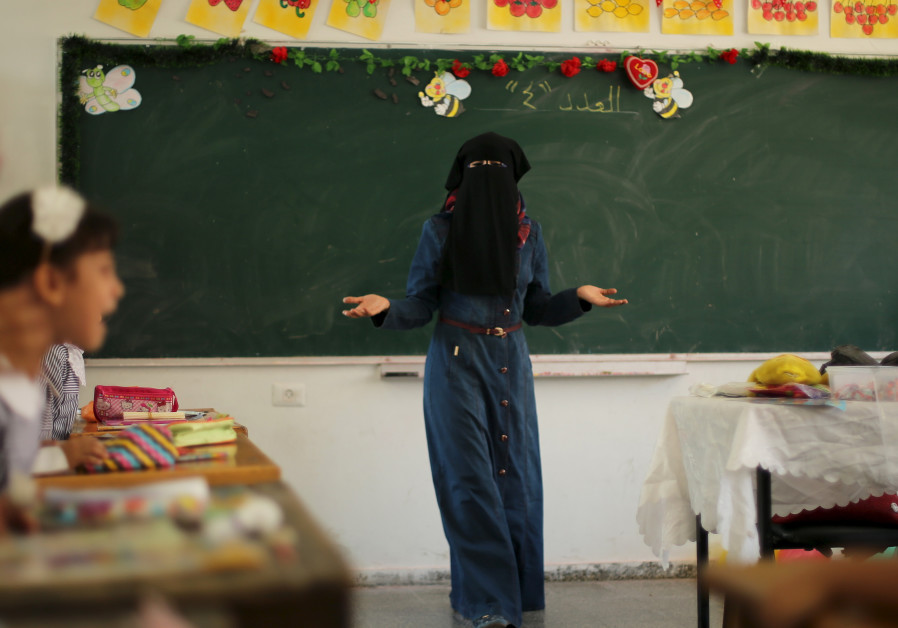 The Norwegian Foreign Minister now has an important issue on her table. It demands great courage, because it involves a change from previous policies. The former Foreign Minister, Børge Brende, last years halted  a grant to a women’s center named after the terrorist Al-Mughrabi, who murdered  30 people on a bus in 1978.

Now it appears that anti-Semitism and glorification of terror and terrorists not only takes place in one women’s center, but is a continuous  theme in elementary schools.

Their textbooks claim that the Jews have no historical connection with the country and that the state of Israel has no right to exist, and therefore violence and terror to kill Jews with the purpose of eradication of Israel is legitimate.

Over a million children and youth are exposed to this propaganda.

The same anti-Semitic schoolbooks are also used in the 370 schools run by the UN Organization that helps  Palestinian Refugees from 1948 and their descendants, , UNRWA.

The new Norwegian Government states in its new declaration that the government “will not support organizations in the Palestinian territories that encourage violence or promote hateful expressions, racism or anti-Semitism.”

Then there’s only one thing to do: Stop all funding of The Palestinian Authority (PA) and UNRWA, and demand that textbooks be rewritten.

The PA has for a long time tried to become a member of the UN. Then PA should work for the UN goals: “Developing friendly relations between nations founded on respect for the principle of the equal rights of the peoples.” (Article 1). Unfortunately, this is not the case. The report from the Center for Near East Policy and Research Ltd shows that anti-Semitism is conducted in four areas:

The name of Israel does not appear in the books, instead ‘the Zionist occupant’ is used. The establishment of Israel in 1948 is referred to as occupation of Palestinian Territory. The maps show that Israel does not exist. ‘Palestine’ is the West Bank and the Gaza Strip plus all of today’s Israel. Children as small as the 2nd grade get the task to colorize this “homeland” with the Palestinian flag.

Nothing is written about Jewish presence in the country for thousands of years. Indoctrination begins early: In second grade, pupils learn that Haifa is one of the Palestinian coastal towns. In third grade pupils learn that “Jerusalem is an Arab city built by our Arab ancestors several thousand years ago”. The present existence of Jews in Jerusalem is presented as an aggressive action against the city’s Arab character. Jaffa is said to be built by Arab ancestors six thousand years earlier. Tiberias is a Palestinian city. Jewish holy places are “Muslim, occupied by the Zionists.”

The relationship to the Jews are justified religiously: The Jews did not respect the agreement with Muhammad, so it was necessary for the Muslims to fight them. They are uncivilized and barbaric, they came from outside, full of enmity and hate, and invaded the country without permission. Without permission? The UN recommended in November -47 that the area was divided into a Jewish and an Arab state. The Jews said yes, the Arab states said no. This is not mentioned.

What is written, on the contrary, is that the occupying power unleashes hordes of male pigs to destroy the crops of Palestinians. Israel is thus presented as an existential threat. To sacrifice blood to these “evil” is therefore a sacred national right, according to the textbooks.

The books do not present peace with Israel as an opportunity or a goal. What Abbas says about a two-state solution is thus hollow propaganda. The books propagate for violent struggle. Firstly, the areas taken in 1967 will be liberated, then; all of Israel. In tenth grade, last year of elementary school, students learn that jihad is good in Allah’s eyes, and becoming a martyr is the highest a Muslim can achieve; even a religious duty. Terrorist al-Mughrabi is being made a hero.

In 2017, Norway allocated over 130 million kroner to the PA. Giving money to a regime that systematically teaches children and youth to hatred and violence and terror, and pay imprisoned terrorists and their families, cannot be justified morally. The Norweigian Foreign Ministry  should immediately suspend money transfers to PA and UNRWA.