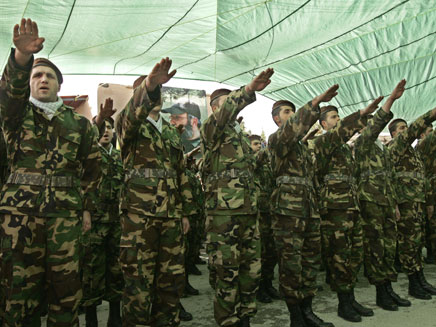 They were on one of the most meaningful deployments of their lives.

A group of West Point graduates fanned out on a mission for one of their fallen classmates, along with his parents and sister. Their battlefield was not in a foreign land, but the marble halls of the U.S. Senate on Capitol Hill.

“Our mission is to make sure people are aware of the Taylor Force Act. It’s addressing the ‘pay for slay.’ The Palestinians have a reward program for terrorism committed in Israel and Taylor was a victim,” said Taylor’s father, Stuart.

He, along with his wife Robbi, daughter Kristen and Taylor’s friends, spent the day meeting more than half a dozen senators from both sides of the political aisle.

“The American public needs to be aware of what’s going on and yes, Taylor, I think would appreciate what has been done,” noted Robbi. “It is bipartisan, it’s not political, and it should be bipartisan. It needs to change.”

Their goal is Senate approval of legislation that would stop the money that goes to pay Palestinian terrorists, and the bill is named for Taylor. He was a West Point graduate who served in Afghanistan and Iraq, and was pursuing his MBA at Vanderbilt University. His bright future was savagely cut short on March 8, 2016, when Taylor was walking with his Vanderbilt friends along the Mediterranean boardwalk promenade in Tel Aviv, Israel. A Palestinian terrorist attacked the group with a knife, and Taylor was stabbed to death.

His killer was identified as a Palestinian, 22-year-old Bashar Masalha, who authorities say went on the stabbing spree that also severely wounded 10 others before he was shot dead by Israeli police. Authorities say his family is now being paid from Palestinian Authority’s funds because he murdered Taylor and attacked the others.

Taylor Force was a West Point graduate who served in Afghanistan and Iraq, and was pursuing his MBA at Vanderbilt University. His bright future was savagely cut short on March 8, 2016, when Taylor was walking with his Vanderbilt friends along the Mediterranean boardwalk promenade in Tel Aviv, Israel. A Palestinian terrorist attacked the group with a knife, and Taylor was stabbed to death.  (Courtesy of the Taylor family)

“Taylor was the best younger brother a girl could ask for,” said his sister Kristen as she stood in the hallway, outside one of the Senator’s offices.

“He was always my hero even before he was in the military. He was just, he was a wonderful person. He was the most selfless person I’ll ever meet.”

She said that when her father called her cell phone with the dreaded news of her brother’s fate, she collapsed on the sidewalk, in shock. That grief was magnified as she learned of the apparent political motive for her brothers killing, and the financial incentive for such terrorist attacks.

“To pay someone to take the life of someone who had no fight in this game, who couldn’t have been a better human being, a better American, just to pay someone… the utter lack of respect for human life is shocking and terrible,” Kristen said.

“I truly hope no other family has to go through what my family has been through, and that people aren’t rewarded for killing others.”

“The idea that American tax dollars or the Force’s tax dollars would go to pay family of the man that killed their son just seems completely backwards something America wouldn’t stand for, that Taylor wouldn’t stand for,” said Spencer Krantz, one of Taylor’s West Point classmates. “Taylor was the light of the room.”

His other classmates agree.

“His life was taken from him and it wasn’t lost in combat,” observed West Point graduate Michael Perry. “He wasn’t in uniform, he was on the other side, so it was very difficult for us to process…he was like a brother to us.”

“Taylor was seemingly unflappable. He always kept his presence with humor, and was in high spirits at all times, even more difficult times. At the academy, he was the person who would lift the spirits up without any effort at all, just by being Taylor.”

His family and friends not only had to deal with the tragedy of Taylor’s killing, but also the fact that his murderer was hailed as a hero during his funeral in the West Bank town of Qalqilya.

“I was absolutely disgusted… to hear about the P.A celebrating his death, and it was this ‘great’ thing,” noted West Point graduate Jordan Morfitt. “I thought, ‘No, you took one of the best people I’d ever met, it obviously should be penalized.’”

The U.S. government gives indirect aid to the Palestinian Authority of more than $300 million a year. According to the P.A.’s online budget, it shells out slightly more than that amount to pay the families, or about 8 percent of its total budget. The Palestinian Authority calls the payments a social services welfare fund, and some observers have cautioned against cutting off the flow of money, fearing such a drastic move could undermine the Authority’s standing in the West Bank.

“The Americans are always telling us that we must stop paying salaries to the families of martyrs and prisoners. We categorically reject this demand,” declared Palestinian President Mahmoud Abbas in a speech in Ramallah last month.

A similar bill was passed by the House in a voice vote on Dec. 5, 2017. Sources say the Senate leadership of both parties support the measure, but some Democrats have put a hold on the legislation as they seek to modify some of the language.

Although Taylor’s family and friends met with eight Senators from both sides of aisle, some were not ready to go on the record about the meetings and how they will vote. But three Republicans were not reluctant to show their strong support.

Tennessee Sen. Bob Corker, the chairman of the Senate Foreign Relations Committee, kissed Robbi hello and put his arm on Stuart’s shoulder when they met in the Senator’s conference room.

“So sad, about all that has happened,” Corker told the Forces.

“I do think Americans would be stunned to know that we are sending money to an entity… using resources to literally pay people to commit terrorist acts,” Corker told Fox News after the meeting. “I think it will become law soon.

When Texas Sen. Ted Cruz sat down with the group at the heavy wooden table of his office, he told them “thank you for stepping out and leading on this. I know you are all hurting, thank you for using the tragedy and murder as a catalyst for good.”

“How do you explain to any American that your taxpayer dollars are going to fund terrorists who are murdering Americans? It is indefensible, and it needs to stop now,” Cruz told Fox News after his meeting.

“There is no reasonable argument why we should be sending U.S. tax payer dollars to fund terrorists who are murdering Americans. This ought to bring Republicans and Democrats together. This ought to pass the senate 100 to nothing.”

“I’m more dedicated than ever to make sure that the Taylor Force Act is signed into law by President Trump,” Graham said. “With the passage of this law, Taylor will not have died in vain.”

Democratic Senate Minority leader Chuck Schumer is a co-sponsor of the Taylor Force Act. He predicted “not a single Democrat will block it.  (Reuters)

He predicted “not a single Democrat will block it,” and added that “as Minority Leader I am doing everything I can to pass it.”

The Force’s visit was organized by JINSA, the Jewish Institute for National Security of America.

“We wanted to properly honor Taylor Force and we think the Taylor Fore act needs to be passed,” JINSA’s president, Michael Makovsky, told Fox News. “The Palestinian Authority uses its funding to reward and incentivize terror, and that is completely wrong and a real obstacle to genuine peace between the Israelis and the Palestinians. We want to encourage and pressure the Palestinian leaders to support the welfare of their people, instead of creating a class of terrorists which effectively, they are doing.”

After a long exhausting day walking from office to office, the group remained hopeful.

“Every bit of energy we’ve dedicated, it’s totally worth it,” said Stuart.

Robbi said that the presence of the whole group, with Taylor’s West Point pals, made “a big difference.” Now they will wait for the pending Senate action.

Schumer also said the bill will “honor the memory and sacrifice of Taylor Force.”

Whitney Ksiazek and Ben Evansky contributed to this report.