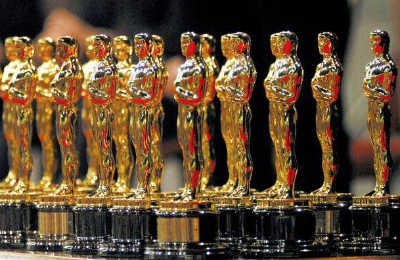 The annual Hollywood frenzy has concluded with winners clutching their awards and mouthing the usual inanities…writes Michael Kuttner.

For the first time TV ratings showed less viewers tuned in to watch this orgy of political correctness and multi million dollar extravaganza. Perhaps ordinary people are now too busy trying to make a living in the real world and are turned off by the artificiality of the whole show. Despite the many talented actors and actresses as well as supporting casts participating it seems that slowly but surely many refuse to be seduced anymore by a lifestyle which is light years removed from what is actually happening. Hollywood is built on fantasy but most of us cannot escape permanently into a fantasy world.

It is therefore perhaps opportune to present an alternative list of Oscar nominees. Some of these names would no doubt do almost anything to receive a nomination. Some have succeeded such as the late unlamented terrorist chief, Yasser Arafat, who was awarded the Nobel Peace Prize – the next best thing to an Oscar. Others are still desperately trying to achieve recognition and it is with these worthy individuals in mind that I suggest some belated recommendations.

Best Actor: There are quite a number of excellent candidates in this category. Standing out from the pack is the glorious leader of the misnamed Democratic People’s Republic of North Korea, the Iranian Supreme Leader and his handpicked President and of course Mahmoud Abbas, elected as the President of the Palestinian Authority in 2008 for a four year term.

Without a shadow of a doubt the winner must be Abbas who has succeeded for what seems like an eternity in hoodwinking the world into believing that paying terrorists to murder Israelis is legitimate and that he is a genuine and true partner for peace.

Best supporting actors:  This is a crowded field. Nominees include terror groups, Hezbollah and Hamas, the tyrant of Syria, the PA “peace” negotiator, the UN and associated groups, BDS exponents and those seduced by 70 years of revisionist lies. It is difficult to pick one out of this motley collection so perhaps a joint award may be the best solution.

Best Actress: PA legislator, Hanan Ashrawi, is a regular actor in the media and can always be relied upon to pontificate with a straight face no matter how outrageous her rhetoric. Another worthy nominee is the High Representative of the EU for Foreign Affairs who hobnobs with the world’s worst human rights abusers and loses no opportunity to pillory Israel. In direct contrast there is Nicky Haley the US representative to the UN. Without a doubt her Oscar winning performances whereby she stuns her UN colleagues by forcefully standing up for the truth and denouncing hypocritical double standards must garner her the top prize.

FOR SPECIAL ACHIEVEMENT: The clear winner must be UNRWA which together with the PA has managed the incredible feat of increasing 700,000 Arab refugees in 1948 to over 7 million today. Employing a unique formula, UNRWA in collaboration with the PA, designates every descendant of the original refugees no matter where in the world they are born, as refugees. The international community continues to be milked for ever increasing funds while the numbers multiply and the recipients become more radicalized. Instead of resolving the plight of these refugees they are held hostage to a deliberate policy of cruel deception. This must be the longest running theatre of the absurd and surely deserves this special award.

Best original screenplay: Without a doubt the Canaanite script is the most outstanding piece produced in recent times. Written and crafted in Ramallah and articulated at the UN in front of an adoring audience this narrative which rewrites historical reality, deletes Jews from the scene and instead anoints today’s Palestinian Arabs as the original descendants of the Canaanites is the most worthy winner of any Oscar in this category.

This is a hard one to decide because there are many talented composers writing songs and musical scores. After exhaustive research it is evident that the writers responsible for the songs portrayed on this video and the performers themselves deserve to be rewarded. UNRWA which facilitated this display of talent should also take a prize for innovative educational programmes.

This is a crowded field with much of the media trying to outdo each other in presenting skewed and distorted news about Israel. There are many worthy nominees and it seems unfair to single out any particular candidate. Perhaps the latest example as highlighted by Honest Reporting deserves this year’s award. Judge it for yourselves.

Without a doubt Poland must take first place as it works overtime to sanitize itself from any responsibility for Jew hatred in that country prior to, during and after the Shoah. Courageous Poles not withstanding, the attempt to portray the country as a Garden of Eden and oasis of tolerance towards its Jewish population flies in the face of historical experiences.

Space precludes further nominations in additional categories. Without a doubt by the time the Oscar spectacular rolls around again in another year there will be no shortage of worthy individuals and groups to be considered.