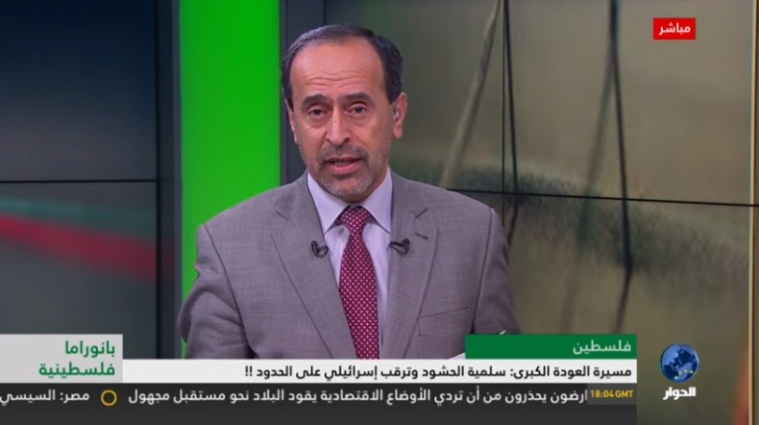 Preparations continue in the Gaza Strip for a mass march to Israel’s border (the “great return march”). To that end the Palestinian organizations operating in the Gaza Strip have organized a “national committee” which in turn appointed professional committees to promote events in the internal Palestinian and international arenas. The organizers’ objective is to extend the scope of the events beyond the Gaza Strip and to promote marches not only in Gaza Strip but in Lebanon, Syria and Jordan. According to the organizers, they are currently coordinating with Palestinians abroad and with Israeli Arabs. One of the activists involved in media preparations is Zaher Birawi, a Palestinian activist based in Britain who is affiliated with Hamas and the Muslim Brotherhood, and who in the past played a central role in organizing convoys and flotillas to the Gaza Strip.

Timing of the events

Nature of the events

Continuing preparations for the campaign

Extending the events to other arenas

Nature of the events Issam Hamad, a member of the “great return march” international coordinating
committee, interviewed in the Gaza Strip by Zaher Birawi, on the London-based
al-Hiwar channel (Facebook page of al-Hiwar, March 9, 2018). Involvement of Hamas and the other terrorist organizations Involvement of Zaher Birawi, Palestinian activist in Britain, affiliated with Hamas and the Muslim Brotherhood movement Zaher Birawi interviews Issam Hamad from the Gaza Strip, one of the
organizers of the march, on the YouTube al-Hiwar channel (March 9, 2018).

In addition, Zaher Birawi said that during the second half of May 2018, close to the 70th anniversary of the nakba, preparations would begin for a number of ships to sail to the Gaza Strip to break the “siege.” He said preparations would continue for close to two months and that the ships would sail around the middle of July 2018. He said they would set sail from a city in Europe whose name would be revealed when the time came. En route to the Gaza Strip they would dock at a number of European ports. He said there would be at least two small boats that would be purchased by activists, some of them Palestinian refugees motivated by their desire to return to the homes, and some by international activists (alresala.net, March 10, 2018). Note: Birawi’s last attempts to organize flotillas to the Gaza Strip failed because of a lack of interest, lack of funding and many other reasons.[3]

Zaher Birawi, who lives in London, is a Palestinian activist affiliated with Hamas and the Muslim Brotherhood, whose current title is “coordinator of the international committee for breaking the siege of the Gaza Strip.” In the past he was involved in dispatching flotillas to the Gaza Strip and in an initiative to hold protest marches along Israel’s borders. On his Twitter account he represents himself as a media person and as chairman of the European-Palestinian Forum (EuroPal) (Twitter account of Zaher Birawi, September 7, 2018).

Past political and propaganda activities[4]

Involvement in sending convoys and ships to the Gaza Strip

[1] Update of the March 7, 2018 bulletin, “Palestinians in the Gaza Strip continue preparing a mass march to the Israeli border (“the great return march”), planned for Land Day, March 30, 2018.” ↑
[2] Middleeastmonitor, March 8, 2018. ↑
[3] For further information, see the September 19, 2017 bulletin, “A Hamas-affiliated Palestinian in Britain admitted the flotilla project to the Gaza Strip was not intended to ‘break the siege’ and bring humanitarian aid, but rather to promote the battle for hearts and minds against Israel.” ↑
[4] Based on existing ITIC documents. It may not be up to date. ↑
[5] At the time the Leeds Grand Mosque was mentioned in the media in connection with terrorists involved in the deadly terrorist attacks carried out on the London Underground in 2005. ↑
[6] See the March 8, 2011 bulletin, “The Palestinian Return Centre: London-based center for anti-Israeli propaganda, affiliated with Hamas and the Muslim Brotherhood, outlawed in Israel. It promotes the demand of the Palestinian refugees to return as a way of destroying Israel. Senior PRC figures send flotillas and convoys to the Gaza Strip and transfer funds to Hamas.” ↑