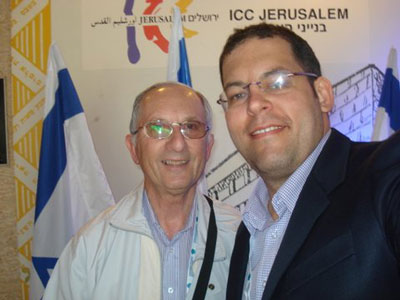 The 6th Global Forum for Combating Antisemitism has just concluded in Jerusalem having been attended by over a thousand participants from Israel and 83 countries around the world the conference covered a wide range of topics dealing with the rising tide of Jew hatred.

Attending from New Zealand were Perry and Sheree Trotter, originators of Shadows of the Shoah travelling exhibition and David Cumin, the founder and CEO of the Israel Institute of New Zealand.

The theme of the Global Forum revolved around combating antisemitism rather than eliminating it. It soon became obvious that this longest running virus of hate can not be eliminated. Thus the focus needed to be on how best to fight it now that it has mutated into so many virulent strains.

Eminent speakers and experts on various aspects of the subject addressed the delegates and workshops dealing with a wide variety of topics provided ample opportunities for participants to pose questions and debate.

Web Antisemitism and Cyber hate with the Ministers of Justice from Israel, Italy, Greece and Malta.

Antisemitism and the rise of far right politics in Europe featuring a keynote address by Natan Sharansky.

Greetings from the Israel Deputy Foreign Minister and speeches by Chief Rabbi Mirvis of the UK and Malcolm Hoenlein, the Executive Vice Chairman of the Conference of Presidents of Major American Jewish Organizations.

Antisemitism in the Far Left. The persistence of Antisemitism in the sports arena.

New tools for the detection and prevention of online antisemitism and cyber hate.

Confronting neo Nazism and antisemitism of the extreme Right in the USA and elsewhere.

The persistence of Christian theological antisemitism in the mainline Protestant Church.

Faith traditions as a resource for combating antisemitism and hate with the participation of several prominent Rabbis as well as the Papal Nuncio and the Imam who is the Vice President of the Islamic Religious Community of Italy. Panel on contemporary antisemitism inside the “Rainbow Coalition.”

The denial of Jewish history in international organizations (UN & UNESCO).

Revisionism and the politics of Holocaust Remembrance in the former Soviet Union and Eastern Europe.

Holocaust Remembrance & Education for tolerance among Muslim and Immigrant Communities in Europe.

Combating Antisemitism on the Campus.

The protection of Jewish and Muslim Religious Practice against Legislative assault in Europe.

An address by the President of Bulgaria whose country was the only one in Europe to save its entire Jewish community during the German occupation.

An address by the former Prime Minister of France, Manuel Valls.

It was an exhausting but exhilarating few days. Unfortunately it can be guaranteed that when we meet again in the future the same problems will still be haunting us.