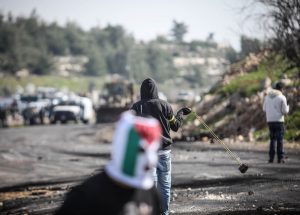 EXECUTIVE SUMMARY: The real test of Hamas’s March of Return campaign in Gaza lies in its ability to mobilize mass violence in Jerusalem, Ramallah, Bethlehem, Hebron, and other parts of the West Bank. So far, most of the Arab inhabitants of those areas are content to watch the events on their screens rather than in the streets.

Hamas’s March of Return campaign in Gaza will count as a success for its organizers only insofar as it mobilizes mass violence in Jerusalem, Ramallah, Bethlehem, Hebron, and elsewhere in the West Bank. This is why Israeli Arab members of Knesset Ahmad Tibi and Hanan Zouabi, among many others, urge the inhabitants of those areas to violently protest Israeli forces in solidarity with their brethren in Gaza. They encourage them to risk their own lives while they continue to draw substantial salaries from the Israeli treasury and enjoy parliamentary immunity. Sending others to the trenches is, after all, a long-established historical tradition.

Anything less than sustained mass violence in these areas will amount to one more defeat for Hamas in its string of defeats. They include its inability to solve Gaza’s social and economic problems; its inability to cope with the loss of potential strategic partner Muhammad Mursi, the Muslim Brotherhood member and ousted Egyptian president, and its inability to handle his replacement by incumbent President al-Sisi, who shares an enmity to the organization fully supported by financial powerhouses such as Saudi Arabia and the United Arab Emirates.

The stakes of failure are high. Both Hamas and its nemesis, the Palestinian Authority under Mahmoud Abbas, which is free-riding on the campaign to condemn Israel, recognize that ever since the takeover of Gaza by Hamas nearly 12 years ago, the Palestinians in the territories no longer cooperate against Israel.

Up to that point, inhabitants of the West Bank joined forces with the citizens of Gaza in a four-year intifada that began in December 1987. The suicide bombings of the 1990s emanated from both areas.

In the wave of violence that erupted in September 2000, erroneously dubbed the second intifada, the Palestinian factions in the West Bank and the PA security forces engaged in mass terrorism, including deadly suicide attacks. In Gaza, the violence developed into a guerrilla campaign against Israeli forces as well as terrorist attacks against Israeli settlers.

The common denominator was the timing of the violence. Both areas burned simultaneously.

This is no longer the case.

Since 2007, when Hamas and Islamic Jihad fought against Israel, the inhabitants and political forces in Jerusalem, Bethlehem, Hebron, and Nablus have been relatively quiet bystanders. So too have been other organizations that one might have expected to join the fray, such as Hezbollah.

During the three major Israel-Hamas confrontations in 2008-9, 2012, and 2014 (the longest military engagement in Israeli history barring the War of Independence in 1948), the West Bank was quiet, for the most part.

The opposite also applied. In the major wave of knifings and other forms of terrorism that took place in Jerusalem, Hebron, and major Israeli cities in winter 2015-16, almost all the attacks were committed by inhabitants of Jerusalem and the West Bank. Gaza, under Hamas’ iron hand, was noticeably quiet.

For Israel, of course, this is a major strategic success for which it is only partially responsible. The major reason for this bifurcated mode of action stems from the division of the Palestinian political community into two bitter rivals.

Alas for both Hamas and the PA, the present campaign has done little to change the situation. As Gaza partially flares up (the numbers for Hamas are disappointing in themselves), the Arab inhabitants of Jerusalem and the West Bank are largely staying out of it.

The best proof is readership of the al-Quds internet site, by far the most influential and widely followed Palestinian media site. Not only have reports on confrontations in the West Bank been scarce, but readers are not showing much interest. The most widely read confrontation in the past two weeks merited fewer than 900 views. In contrast, a rumor that Egyptian singer and actress Shireen Abd al-Wahhab might be marrying her suitor registered over 3,000 views.

This suggests that most of the Arab inhabitants of Jerusalem and the West Bank are content to watch the events on their screens rather than go out into the streets to take on Israeli troops.