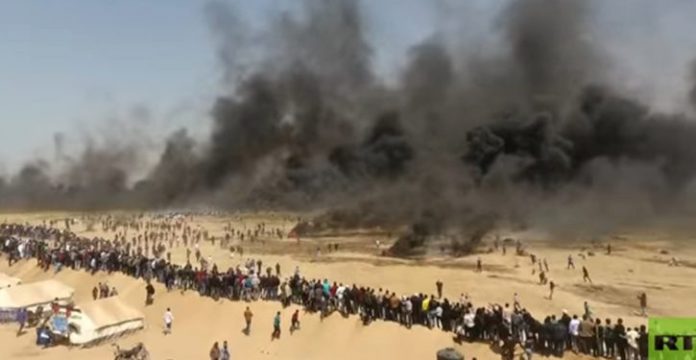 What would the US do if 30,000 Mexicans, organized by a known terrorist group, marched towards the Texas border, demanding to return to their ancestors’ homes, with many of the protesters throwing rocks and Molotov cocktails, carrying fence cutters, launching burning kites that set ablaze US territory near the border, igniting tires, and even shooting guns at US agents across the border?

If the US used force to protect its border against such a “peaceful protest,” what percent of the 30,000 Mexicans would end up dead or injured? Would it be more or less than 40 (about .13%)? And how would the global media and human rights organizations react to these incidents?

Now consider the reaction to Israel’s defense against precisely this kind of assault on its sovereign border, dubbed the “Great Return March” and organized by Hamas, a US-State-Department-designated-terrorist organization. Hamas has acknowledged that at least five of its members were among those killed in the march. The number of terrorists involved in the related violence is likely much higher. According to the Meir Amit Intelligence and Terrorism Information Center, “32 of the 40 Palestinians killed (80%) were terrorist operatives or individuals affiliated with them.”

If the “Great Return March” had any truth to it, the Hamas-organized propaganda offensive would have been called the “Great Deception March” because it is entirely founded upon deception. Just watch this this free, 10-documentary that includes footage of Gazan protestors faking or maximizing injuries for the media, revealing (among themselves)  raw Jew hatred and dreams of destroying Israel and driving out all of its Jews, and doing rather non-peaceful things like burning tires, attempting to damage the border fence, and hurling rocks over it. Incredibly, on April 6, an advisor to Mahmoud Abbas, leader of the Palestinian Authority (PA), actually highlighted the deceptive nature of the march, accusing Hamas of “only selling illusions, trading in suffering and blood.” Mahmoud Al-Habbash, Abbas’ Advisor on Islamic Affairs and Supreme Sharia Judge, delivered a sermon, broadcast on official PA TV, in the presence of Abbas, in which Al-Habbash accused Hamas of intentionally sending Palestinians in Gaza to “go and die,” only so that Hamas has stories of dead Palestinians for “the TV and media.”

Hamas has a long history of using human shields to maximize Gazan casualties and thereby smear Israel’s image. As each of the last three Gaza-Israel wars has shown, the more Gazan victims Hamas can produce, the more easily Israel can be tarnished by the media and its consumers. Such demonization supports the broader goal of delegitimizing Israel legally, with lawfare attacks in international forums, and economically, with boycotts, divestments, and sanctions (BDS).

Hamas knows that most observers will simply focus on images of injured and killed Gazans, rather than blame Hamas for sending children towards a militarized border. Obviously, there would be no risk of provoking any forceful reaction from Israel’s border protection forces if the protests were peacefully held at a distance of at least 500 meters from the border. But instead, the protestors actively tried to damage the border fence itself, while threatening Israelis on the other side of it. Were they expecting hugs and flowers in response?

But the biggest deception of all behind the so-called “Great Return March” is deceiving the Palestinians themselves into thinking that they have any hope of “returning” to any homes or territory in present-day Israel that their ancestors might have occupied before 1948. Have Israeli Jews ever demanded a “return” to the millions of homes their ancestors lost in Europe, during the Holocaust, or in the Arab and Muslim world, from which roughly a million persecuted Jews were displaced between the 1940s and the 1970s? Instead, the Jews accepted the cruelty of history and focused their energies on building a vibrant state in the tiny sliver of land they were given the chance to develop in 1948.

By contrast, when Gazans received a historic opportunity, after Israel’s 2005 unilateral withdrawal from Gaza, to prove that they can engage in responsible and peaceful state-building, they opted to turn Gaza into a Somalia rather than a Singapore. Instead of choosing coexistence and cooperation, Hamas has promoted a culture of anti-Israel hatred, while diverting Gaza’s resources to terrorist rockets and attack tunnels, even after launching and losing three wars against Israel in the span of seven years (2008, 2012, and 2014).

Poor governance has consequences, as Gazans have painfully learned from a shortage of jobs, electricity, sanitation and other basic goods that Hamas has failed to deliver.

Yet global reaction to the Gaza border “protests” shows just how much the Great Deception March succeeded in deceiving so many, who end up blaming Israel while ignoring Hamas’ role in the violence and, more generally, giving Hamas a pass on its cruelty, corruption, and disastrous policies.

The human rights organization Amnesty International recently called for an arms embargo against Israel, arguing that Israel has been “killing and wounding of civilians demonstrating in Gaza by the Israeli forces, despite the fact that they don’t pose any immediate threat.”

If even Palestinian leaders see through the Hamas ruse, why do Amnesty, the UN, the NY Times, Bernie Sanders, and so many others have such a hard time understanding what’s really going on?

Their reactions show no regard for history or context, and demonstrate how little Israelis can rely on the assurances of those pressuring them to make concessions to Israel’s sworn enemies.

Why is there no comparable outrage for Turkey’s recent actions in Afrin, for example, where far more have died (500 civilians) and at least 150,000 have been displaced. Maybe because Palestinians somehow deserve a unique level of sympathy?

But then why has there been a deafening silence about the 36 Palestinian civilians killed during ten recent days of fighting in Yarmouk, Syria, which violence has produced an estimated 5,000 Palestinian refugees?

Maybe because, for example, the New York Times devoted almost four times as much coverage to Gaza than to Yarmouk. Comparing the Times’ coverage of the two conflict zones from April 17 (when fighting in Yarmouk began) through April 30, the results are striking:

–Yarmouk is covered by 22 articles with zero op-eds

–Gaza is covered by 81 articles, including at least three op-eds.

To put that distorted Times’ focus into perspective, nearly 4,000 Palestinians in Syria have been killed since 2011 – about double the number of Gazans, including terrorists, killed in all conflicts with Israel during the same period. Such figures, coupled with the Times’ well documented and extensive bias against Israel, suggest that the disproportionate coverage is driven more by an anti-Israel animus than any compassion for Palestinian suffering.

It has been an article of faith among European and US “progressives” that Israel’s conflict with the Palestinians could be resolved if only Israel withdraws from territory that it conquered in 1967, after surrounding Arab armies threatened to annihilate the NJ-sized country. In 2005, to test that idea and hopefully promote better relations with Gazans, Israel unilaterally withdrew from Gaza Strip.

Israelis on the right argued that such a move would be perceived as a surrender out of weakness, and the power vacuum created by the Disengagement, as Israel’s 2005 Gaza withdrawal was called, would be quickly filled by extremists who exploit their newfound freedom to attack Israel.

Israelis on the left claimed that taking a big risk to promote better relations, and eventually peace, with Gaza would strengthen Israel’s international standing. Those supporting the Disengagement also argued that it would bring Israel global support if ever the Israeli army was forced to defend its border with the Gaza territory that it evacuated.

The Great Deception March shows just how much the right was right.