UNRWA is very proud of their microfinance program, giving small loans to people who need them:

The UNRWA microfinance department provides sustainable income-generation opportunities for Palestine refugees, as well as other poor or marginalised groups who live and work near them.

But if you look at their annual report you can see that Palestinians only take a small percentage of the microfinance loans that UNRWA offers. They gave out loans to 38,595 people in 2017, but only  13,756 went to Palestinians.

In Syria, practically none of the loans go to Palestinian “refugees.” Out of 11,094 loans total in Syria, a mere 288 went to Palestinians.

Who gets the rest?

According to an investigative report in the Arabic Daraj site, some of the loans have been made to elements of the Syrian intelligence services and militias active in Syria.

The wife of the Syrian president, Asma al-Assad, seems to have worked with UNRWA on the loan program. Here’s a photo of her with the then-head of UNRWA Karen Abu-Zaid. 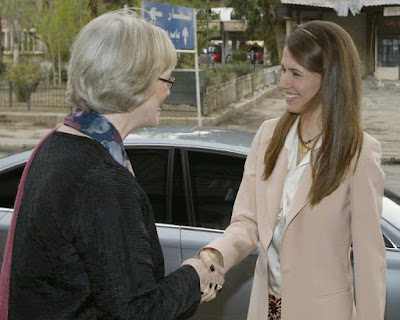 The article has interviews with former UNRWA employees who testify that the agency’s loans were taken over by Syrian officials, and loans were made to those that the regime wanted to get the loans.

The investigation uncovered hundreds of applications and documentation from UNRWA. 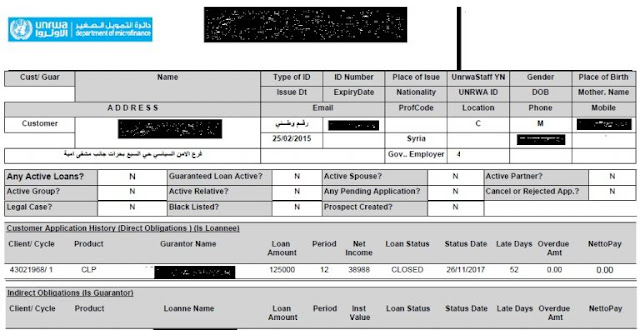 In addition the UNRWA program covers the Gaza Strip, Jordan and the West Bank. In all of these areas, loans are granted to elements of the Ministry of Interior (Jordan and PA) or armed militias (West Bank and Gaza.) For example, In Jordan, the General Intelligence is granted loans.

In the West Bank, elements of Hamas and Islamic Jihad, which are heavily hostile to UNRWA, will happily allow their terrorists to accept  UNRWA loans, according to the report.

The West is giving hundreds of millions to an agency that loans money to terrorists and allies of despots.