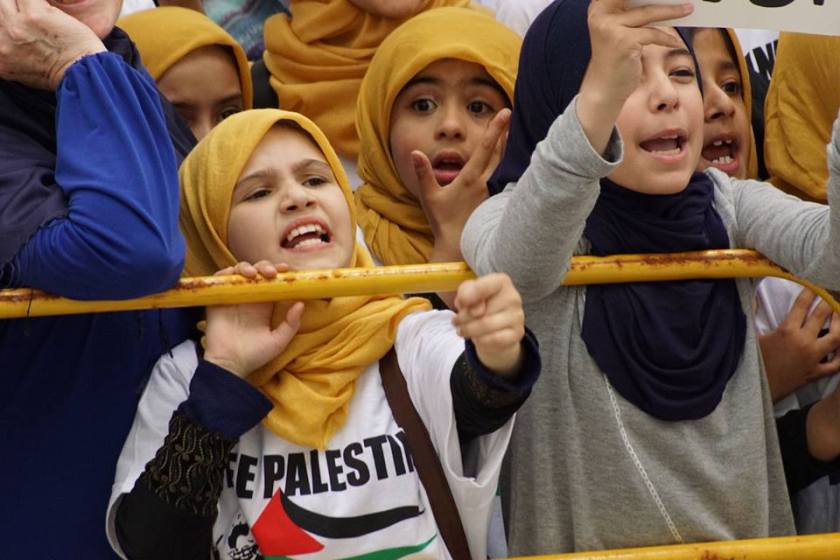 Quds Day, officially called International Quds Day, is an annual event held on the last Friday of Ramadan that was initiated by the Islamic Republic of Iran in 1979 to express support for the Palestinians and oppose Zionism and Israel.

Rallies and marches are held world wide for this event.

Toronto has held these marches for several years, however, it is just in the past year that there has been concern voiced for the content of these rallies and marches. June 2018 revealed songs being played in the park, calling for the killing of Israelis.

The march route in Toronto runs from Queens Park legislature, down University Ave towards the US consulate on University Ave. This main street is closed for this march, with heavy police presence. This march is usually counter protested against by the Jewish community who feel the inordinate threat against their community with this rally and march.

This march encompasses all age groups, including very young children. Unfortunately, the children are just as vitriolic as their parents in their disparagement of Jews and Israel.

The indoctrination starts from birth. They are taught that Israel are the oppressors and must be fought against.  Children in these marches have been seen to draw their fingers across their throats while chanting  ‘Death to Israel’.

Premier Doug Ford has vowed to put an end to these rallies. We hope he follows through with this promise. Canada, a supporter of the state of Israel, must not allow this type of anti Israel hatred to have a voice on it’s streets.

The Center for Near East  Policy Research has revealed the indoctrination of the hate and mistrust for Israel in a Palestinian Authority Teachers Guide in a report by Aaron Groiss. Below is a copy of the report. Palestinian school children are taught not only at home that they are the oppressed and must resist, in fact, martyrdom is exalted, but they are also taught this in their school systems.

“Preparation: The Teacher will tell a short story about our homeland, Palestine: ‘My grandfather used to live in a beautiful village in [the area of] Haifa. He was working in agriculture, loving the land and guarding it. On a sad day alien faces came in order to expel my grandfather from his land, burn what he had sown and force him to emigrate to distant lands.”

Grade 3 students are instructed to prepare themselves for a trip and, then, they are told that they cannot go to the place they had chosen to visit in Palestine:

“-The teacher will discuss with the students the goals of visiting the place they have chosen for their trip.

-The teacher will distribute among the students a form of parental consent to a field trip as appearing in the activity [text].

-The teacher will ask the students that their parents fill in the trip’s consent forms.

-The teacher will ask the students to prepare for the trip the food and water they would need, as well as pens and paper sheets.

-The teacher will ask the students to follow the field trip’s regulations.

-The teacher will assign the students with [the task of] documenting what they would see by taking pictures and writing a report.

-The teacher will ask them to show the pictures in class.”

Note: The teacher will clarify to the students the reasons why they cannot visit the places they have chosen in Palestine.”

According to Muslim belief, Prophet Muhammad miraculously traveled from Mecca to Jerusalem riding a heavenly winged beast named Al-Buraq, which he tied to the Wailing Wall upon ascending to Heaven from Jerusalem’s Temple Mount. The Wall thus became holy to Muslims under the name Al-Buraq, but it has never been equal in sanctity to Al-Aqsa Mosque and the Dome of the Rock. The following piece presents it as such, probably as part of the PA’s effort to counter the Jews’ claim to that place. It should be noted that Muslims used to recognize in the past the Wall’s holiness to Jews under another Arabic name – “the Wall of the Mourning Place (Hait al-Mabka)”, since only Jews would mourn there – but this is not the name used in the following piece:

“The teacher will prepare a number of paper slips in which he will write the [names of the] most important sites and holy places located in Jerusalem (Al-Aqsa Mosque, the Dome of the Rock, Mosque of Umar, Al-Buraq Wall, the Church of the Holy Sepulcher, and the names of some of Jerusalem’s gates) and will ask the students to select a slip, which he will open and read what is in there. The teacher will speak about any site and place appearing in those paper slips, will show a video film about Jerusalem, its wall and gates and the holy places therein.”

Red tulips have been considered in Iran for decades a symbol of Iranian martyrs. The following piece similarly connects Palestinian martyrs with the local anemone flowers, a theme that has never been encountered so far in PA schoolbooks and other curricular material. Does this indicate a recent Iranian educational influence on the PA curriculum?

[Answer:] It causes asphyxiation and pectoral crises, catarrh and pain and cauterization in the eyes (the students will have to know the gas’s type)

-Avoid staying in the way of the air that carries the gas; stay away of the gas’s source.

-It is possible to use swimming goggles, or breath through the shirt.