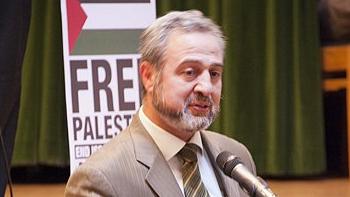 Muhammad Kazem Sawalha, a senior Hamas operative living in London, continues his participation in Hamas political activities for recently participated in a conference in Istanbul which opposed Mahmoud Abbas’ dissolution of the Palestinian Legislative Council (against which Hamas is waging a political, propaganda and legal campaign). During the conference Muhammad Sawalha kept a low profile, in ITIC assessment to keep from drawing fire from the British media (as occurred when he was part of a Hamas delegation to Moscow in September 2017).

Sawalha lowered his public activity profile in Britain after his trip to Moscow was made public. One of the things he did was to quit the board of trustees of the north London Finsbury Park Mosque, which is affiliated with the Muslim Brotherhood (Hamas’ parent movement). He quit even though the inquiry carried out by the British Charity Commission following his participation in the Hamas delegation to Moscow found he had committed no offense because Hamas is not designated as a terrorist group in Britain (only its military wing is banned, as opposed to the United States, where Hamas as an organization is designated as a terrorist group).