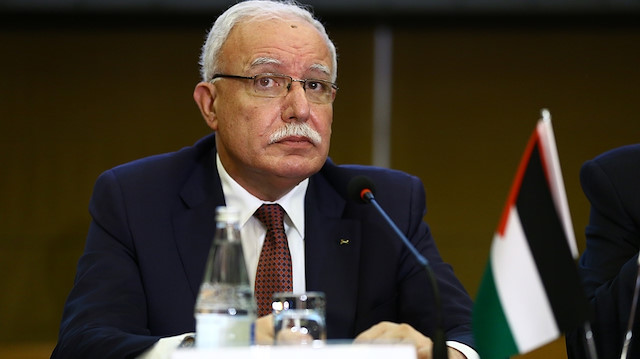 Palestinian Foreign Minister Riyad al-Maliki has said the U.S. decision to stop financial aid to a UN agency that supports Palestinian refugees has not affected its works.

“Thanks to the contributions of many countries led by Turkey, UNRWA [United Nations Relief and Works Agency ] continues its services,” al-Maliki told Anadolu Agency.

Last year, U.S. President Donald Trump cut Washington’s annual funding for UNRWA. The U.S. had been the agency’s largest contributor by far, providing it with $350 million each year — roughly a quarter of its overall budget.

According to UNWRA, nearly one-third of the registered Palestine refugees, more than 1.5 million individuals, live in 58 recognized Palestine refugee camps in Jordan, Lebanon, the Syrian Arab Republic, the Gaza Strip and the West Bank, including East Jerusalem.

Denying the reports that Arab countries are in the process of normalizing ties with Israel, al-Maliki said: “The main requirement for normalization is the establishment of an independent Palestinian state with East Jerusalem [al-Quds] as its capital on the 1967 borders.”

“We will not bow to any pressure on the Palestine cause. It is our duty to defend the Islamic values in Jerusalem in the name of the Muslim Ummah and Arabs,” he said.

The Palestinian Authority has made great efforts to punish Israel’s crimes against humanity in Gaza, al-Maliki added.

Some Arab states appear to be taking tentative steps toward normalizing relations with Israel.

These steps have reportedly included visits to Tel Aviv by Iraqi officials and Egypt’s recent admission that it was coordinating security efforts with Israel in the volatile Sinai Peninsula.

Israeli officials in recent months have also reportedly visited a number of Arab countries, including one such visit to Oman in October by Israeli Prime Minister Benjamin Netanyahu.

Nearly 50 countries, including Israel and several Arab states, reportedly confirmed their participation in the “Ministerial to Promote a Future of Peace and Security in the Middle East,” held jointly by the U.S. and Poland, took place in Warsaw, Poland on Feb. 13-14.

On several occasions, Israeli officials have spoken of “positive change” vis-à-vis diplomatic normalization with the Arab world — despite a continued lack of progress in the Israel-Palestine peace process.