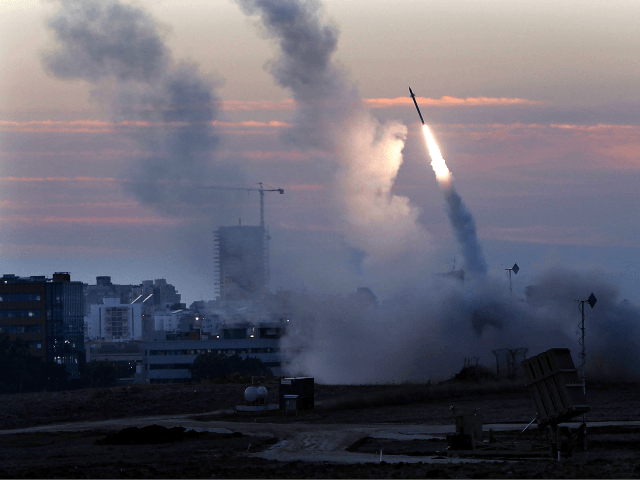 If your country was bombarded by over seven hundred missiles would you expect universal world condemnation or calls for restraint and diplomacy?

Once again like a recurring nightmare the terror regime of Gaza launched endless barrages of rockets at Israeli communities in the south, including Beersheba and as far north as Rehovot.

Their motives and agenda are very clear and unambiguous. Every year when Ramadan starts there is an upsurge of violence and terror which makes one wonder what theological justification Islamic leaders believe makes it imperative to murder and maim. This year the expressions of non-peaceful intent coincided with Yom Hazikaron (Memorial Day) and Yom Ha’Atzmaut (Independence Day). An added bonus is the impending Eurovision event which brings thousands of tourists and participants to Israel. The stated intention of the terrorists in Gaza and their supporters in Ramallah is to cause so much mayhem and fear that people will cancel their visits to Israel and the celebrations concerned will be fatally disrupted.

Underlying all these motives is the eternal aim of terrorizing Israelis and seeking the elimination of the Jewish State.

Unless you understand the basis for this latest round of violence you cannot come to any reasoned or informed conclusion as to what should be done to end it and more importantly prevent it from happening again at regular intervals. Therein resides the clue as to why most of the international community is clueless and either ignores it or more likely blames Israel for protecting its citizens. Even when there is a small glimmer of common sense most of the UN tends to make a moral equivalence between the acts of the terrorists and the response of those targeted.

Then there are those countries and political leaders who remain completely indifferent to what is transpiring. Sometimes they wake up after being shamed but most often prefer to ignore terror acts against Jews unless the Jews fight back. If that happens, these politicians suddenly wake up and start pontificating about disproportionate reactions.

New Zealand is a classic example. Despite the barrage of over 700 missiles against Israeli civilians a cone of silence has descended with the Prime Minister, Foreign Minister and Leader of the Opposition remaining mute. As a co-sponsor of the notorious UN Resolution 2334 which denied any Jewish connection to Jerusalem, Judea and Samaria I presume that one cannot expect a sudden rush of common sense to emanate from Wellington.

The media, of course, have performed according to a well-scripted agenda with most issuing unbalanced headlines and believing every lie that Hamas proclaimed. Cartoonists are once again not far behind. Some newspapers ignored the subject no doubt believing that readers were not interested.

Meanwhile, here in Israel, the residents of those communities directly impacted by the terror onslaught spent days and nights running to shelters and in some cases suffering damage to property and being traumatized. Children were particularly hard hit and in general normal daily life became intolerable. On Yom Hashoah and Yom Hazikaron sirens wail and everyone stands silently. When the sirens were activated for incoming rockets many young children stood to attention instead of running to the shelter. This illustrates the utter confusion and trauma which has affected youngsters.

Israel’s retaliatory measures involved the air force bombing strategic buildings and places from where the rockets were being launched. The question which remains unanswered is whether these sorts of targets actually help to shorten the conflict. Ignored by international commentators and others is the fact that Hamas positions weapons and fires rockets from the midst of schools, clinics and private homes. This strategy ensures that either Israel has to avoid such places or that there are civilian casualties as part of collateral damage. In a typical example of how the media falls for fake news, it was reported that a young child had been killed by Israeli bombing. In actual fact, it turned out that the fatality had been caused by a Hamas rocket misfiring but by then the lie had gone viral.

It was only after a top terrorist operative was “taken out” that talk of a ceasefire suddenly surfaced. Instead of carrying on we once again agreed to stop military action with the job only half done. As has happened every time in the recent past, this cessation of military action will be only temporary. In other words by the time traumatized residents of the south will have recovered the next round will break out. The Gaza terrorists will replenish their stock of rockets while we provide them with the fuel to manufacture them and dig more tunnels. This is not a secret because those responsible for the terror have already proudly and blatantly announced that the 700 missiles launched against Israelis were “just a practice” and that “the real war will be restarted in the summer if Israel does not agree to each and every demand.”

Is this intolerable insanity or not?

In order to put a final end to this farce, we need to adopt the campaign strategy employed by the Allies against Germany in 1945 when they aimed for unconditional surrender and the punishment of those who plotted murder and mayhem. As a first requirement, we should reinstate the targeting of terror leaders so that they and their successors either “disappear” or are driven so far underground that they will never see the light of day again.

Anything less will result in repeated rounds of terror and unsustainable life for the residents of southern Israel. The UN won’t like it and the hypocrites of the world will scream. At the end of the day, however, we need to demonstrate that Israeli lives can never again be extinguished without exacting a heavy price.