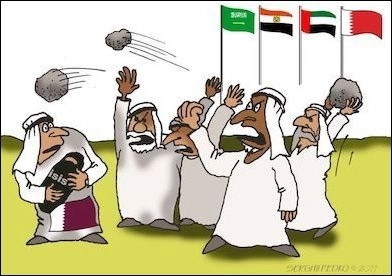 Action alert: Senate Joint Resolution 26 calling for an end to the U.S. sale of new military hardware to Qatar faces a critical procedural vote within the next 24 to 48 hours. Please contact your senator via email or telephone and urge a “yes” vote on S.J.Res. 26.

Two years ago this coming Sunday, President Donald Trump stood in the White House Rose Garden and called on the tiny, oil-rich emirate of Qatar to “end its funding” of “extremist ideology” and come “back among the unity of responsible nations.”

Exacting action in the spirit of these comments, this week U.S. senators will begin considering a resolution, introduced last month by Sen. Rand Paul (R-Ky.), to halt the sale of new military hardware to Qatar.

Trump’s statement came less than three weeks after he addressed a summit in Riyadh of more than 50 Arab and Muslim leaders, and just days after a coalition of Arab countries, including Saudi Arabia, Bahrain, Egypt and the United Arab Emirates (UAE), cut off diplomatic ties with Qatar and closed their airspace, shipping lanes and overland transportation links to the emirate. …

The reasons for this split, a Saudi minister said at the time, were Qatar’s support for terrorist organizations such as al-Qaeda, Hamas and ISIS; its support for regional destabilizer Iran; and the role of Al-Jazeera and other government-funded Qatari media in fomenting unrestin the region. All of this has taken place amid an aggressive increase in Qatar’s military spending during the past decade.

Just last week, Qatar exhibited a Janus-faced approach to regional affairs by first signing onto the Organization of Islamic Cooperation Mecca Agreement focused on unifying the Arab world against Iran’s encroachment in the region. A day later, Qatar’s foreign minister expressed reservations with the agreement, noting, “Qatar has reservations on the Arab and Gulf summits’ [policy towards Iran] because some of their terms are contrary to Doha’s foreign policy.”

Emirati Minister of State for Foreign Affairs Anwar Gargash pointed outQatar’s stance may be a result of “pressure on the weak lacking sovereignty, insincere intentions, or absence of credibility.”

Unfortunately, at a time when the U.S. tautens the economic vise against Iran, and while regional opposition to Qatar continues unabated, there has been significant wavering in the U.S. to hold Qatar to account. This likely is because of strong lobbying by Qatar, resistance from senior members of the administration who fear that a more robust policy towards Qatar could be destabilizing, and the misplaced focus of many in Congress on the purported shortcomings of Saudi Arabia, a U.S. ally and Qatar’s main Arab rival.

The result: a clouded message towards the emirate and no coherent strategy for changing its behavior. On one hand, Qatar undermines U.S. and Gulf Cooperation Council policy towards Iran, yet the emirate continues to benefit from U.S. largesse.

It’s time for that to change. Senate Joint Resolution 26 can unite a dovish coalition in Congress, often led by Sen. Paul, that wants to limit arms sales generally, and hawkish elements that want to isolate Iran and its allies. The resolution accomplishes both purposes.

This resolution sends a strong message: as long as the emirate continues to actively support regimes and groups who work in direct opposition to the U.S. and our allies, it cannot count on continued American support.

The Qataris think that America’s hands are tied because they house America’s biggest military facility in the region, Al Udeid Air Base, at a time when the U.S. is battling jihadists, combatting the growing strength of Iran’s regional proxies, and continuing its war in Afghanistan. However, some analysts believe there are several other countries where the U.S. could set up a comparable Air Force base in the region, all of them more reliable allies than Qatar.

Although moving the base would take time, it may not have to come to that if the U.S. starts sending the message now that Qatar no longer has carte blanche to undermine the interests of America and its allies. It should begin by cancelling a planned upgrade of Al Udeid Air Base. But the best way to convince the emirate that it must end its destabilizing activities in the Middle East is to deny Qatar the kind of high-end military hardware that America provides to its allies.

Our allies are waiting to see what happens in Congress this month. If the U.S. continues to assist the military build-up of a nation that has demonstrated hostility to their interests, they will be less likely to go the extra mile supporting American efforts to curtail Iran or support President Trump‘s Israeli-Palestinian peace plan.

If the U.S. returns to the words President Trump spoke two years ago and uses its considerable leverage to rein in Qatar, its commitment to its allies will be more than repaid. Congress has a role to play and it should start by passing Sen. Paul’s resolution of disapproval of arms sales to Qatar.