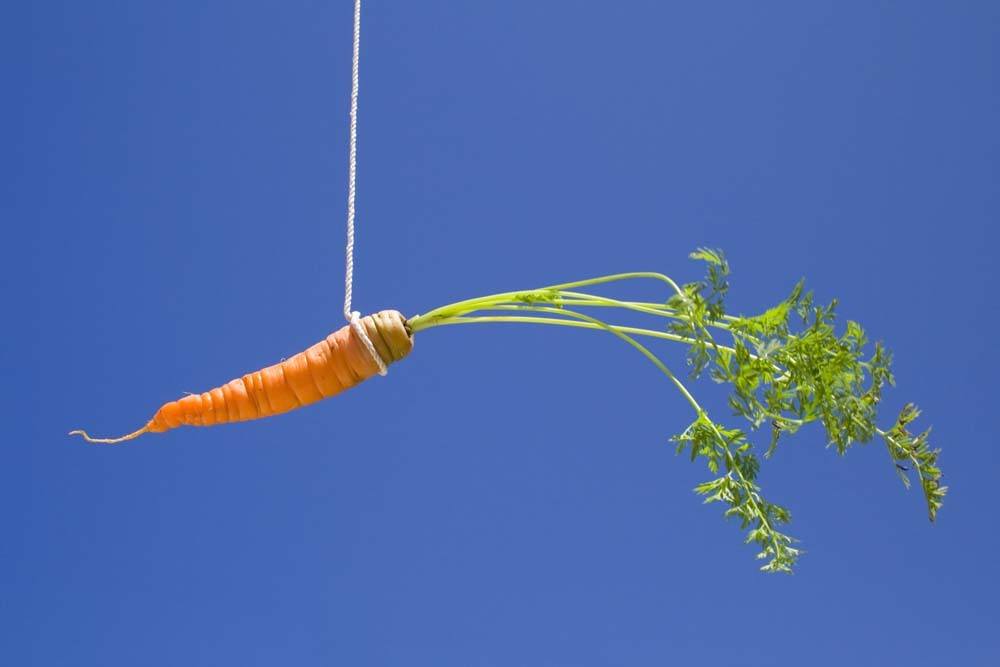 Definition: a policy of offering a combination of reward and punishment to induce good behaviour.

This motivational theory has been used by parents for generations when dealing with recalcitrant children and teens. It is also popular amongst politicians and a useful tool if employed properly by nations facing challenges and threats from those engaged in unruly relationships.

It is these latter situations which I want to address simply because the mess we find ourselves in today is a direct result of misplaced carrots and missing sticks.

Our politicians, like unruly, spoilt and badly brought up children, are classic examples of how endless supplies of carrots only leads to more outrageous behaviour, tantrums and never-ending demands. The disgraceful expressions of self-entitlement on display during the failed coalition negotiations and now surfacing again as we gear up for another round of elections exemplify exactly how rewarding selfish antics never pays.

Trying to buy love and fidelity with promises of cabinet positions and inevitable showers of further long-suffering taxpayers’ money is entirely the wrong way to achieve positive results. Politicians and political parties engaging in lolly scrambles at our expense make unedifying spectacles. Whether it’s a fight to gain a seat at the Cabinet table, upgrade to a ministerial vehicle or free travel, it makes no difference.

Instead of telling those who are demanding the sky that portfolios will be allocated on merit and not greed the representatives of the largest party instead dish out ever more carrots in an effort to placate, appease and buy quiet. Just as bribing unruly children with unattainable promises never works in the long run so it is with politicians whose juvenile tantrums inevitably induce political instability instead. In advance of a second round of elections in September, we already are witnessing more mudslinging, pre-emptive jockeying for jobs and behaviour more reminiscent of kindergarten kids than aspiring leadership.

Is it any wonder therefore when voters tune out, turn off and abstain from casting their ballot?

When it comes to surveying how we deal with threats from our immediate neighbours and others menacing us from afar, the stark failure after offering carrots to buy peace and the refusal to wield sticks when needed are glaringly obvious.

One would have thought that after seventy-one years of continual carrot gestures to appease and placate those advocating implacable hate towards the notion of Jews re-establishing sovereignty that the time had finally arrived for the judicious use of some sticks. It is obvious that continuing to push failed gestures of bribes, territory withdrawals and other meaningless policies merely encourage further intransigence and inflated demands.

For punishment to be most effective it must be given at the time the undesirable behaviour is actually performed. This sage piece of advice is written in a handbook on how to deal with unruly children. Its common sense approach is clearly evident when one surveys the chaotic state of affairs confronting us nowadays.

Despite clear evidence that Iran is funding, promoting and engaging in terror acts the international community still is fixated on the illusion that pouring some more money into Tehran’s coffers will effect a change. Threatening to use sticks but then equivocating endlessly is a sure recipe for failure. We saw it with Chamberlain and Munich and there is no reason to believe that the results today will be any different. Meanwhile one of the expert commentators on CNN complained: “that the US policy towards Iran is all stick and no carrot.” Go figure that one out.

The unelected Prime Minister of the PA runs every Monday & Thursday to the media and accuses Israel of causing the financial woes that his kleptocracy is now mired in. Having recently given themselves a 67% salary rise and continuing to use donated funds to pay pensions to murderers of Israelis these paragons of corruption are nevertheless still the recipients of endless torrents of taxpayers’ money. Can any sane individual explain why after the latest in a daily torrent of incitement we should not be employing a few whacks of the stick?

Meanwhile, the BBC has decided to stop using the word “terror in order to avoid being perceived as biased in its reporting.”  How that carrot will appease the terrorists of this world is anyone’s guess.

The most blatant example of how carrots instead of sticks only makes matters worse and postpones the eventual day of retribution is evident in the way that the terror regime in Gaza is still holding Israel hostage on a daily basis. As arson balloons and projectiles set dunams of Israeli agricultural fields and forests ablaze our responses are pathetically futile. While our farmers and residents watch their environment and homes burn we first of all restrict the fishing zone off Gaza and then almost before you can blink expand it again. As thousands demonstrate on the border, screaming their desire to murder us and their leaders declare their undying objective of destroying us with Iranian supplied rockets, we keep supplying them with electricity and water. In fact, we are now constructing a bigger pipeline so that they can receive more of our water.

Unbelievably on a regular basis we also facilitate the transfer of millions of dollars in cash provided by Qatar to be trundled into Gaza. Just remember that the next time you are tempted to fly with Qatar airways.

Apologists say that we cannot punish an entire population because of the actions of “a few.” Based on that flawed reasoning the allies would never have defeated the Nazis and their supporters. In both cases, the murderous regimes were installed by a complicit populace and no amount of misplaced appeasement would defeat them.

We have retaliated occasionally by demolishing empty buildings in Gaza, terror tunnels and other infrastructure but none of these sticks have slowed down the acquisition or manufacture of rockets or extinguished the desire to murder us. If we are waiting for the UN to give us a green light we will be waiting in vain. This corrupt organization is only interested in keeping the flow of carrots going.

How long must we continue to endure this insufferable state of affairs? When will our politicians wake up to the fact that tough love is long overdue?

Is it not time that we finally and seriously “stick” it to those causing us injury and plotting our demise?

The next round of elections is as good a time as any to make a choice between those who huff and bluff and those who are ready to act.