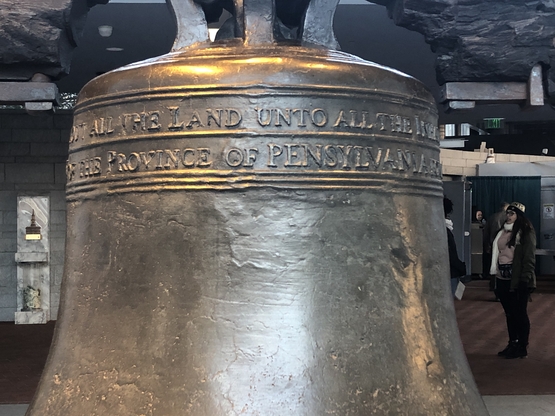 THE CONTINENTAL CONGRESS in Philadelphia approved the final text of the Declaration of Independence on the Fourth of July, but it wasn’t until July 8, 1776 that the historic document had been printed and could be publicly read. From the tower at Independence Hall the great bell rang out, summoning citizens to hear the new nation’s proclamation of sovereignty. What we know today as the Liberty Bell had not yet acquired its iconic crack. But its noteworthy inscription was plain to see: “Proclaim LIBERTY Throughout All the Land Unto All the Inhabitants Thereof.”

Those words hadn’t been drafted by one of the Founding Fathers. They came from the Hebrew Bible — specifically, Leviticus 25:10, where the ancient Israelites were commanded that at regular intervals, slaves must be freed and debts forgiven.

At the time of the Revolution, Jews were a minuscule fragment of the American population. Perhaps no more than 1,000 of the colonies’ 2.5 million residents were Jews, or “Hebrews,” as they were often called. But while the Hebrew presence in revolutionary America was microscopic, the Hebrew influence on revolutionary America’s ideas — ideas about freedom, monarchy, and national destiny — was immense. The inscription on the Liberty Bell is just one of innumerable examples of how language from the Hebrew Bible stamped the nation’s cultural and political vocabulary.

Many of those examples have been gathered in a new book, the title of which comes from the same biblical verse. Proclaim Liberty throughout the Land: The Hebrew Bible in the United States is a sourcebook spanning more than two centuries of American history, from the arrival of the Pilgrims through Abraham Lincoln’s Second Inaugural Address. Compiled by Meir Soloveichik, Matthew Holbreich, Jonathan Silver, and Stuart Halpern, four scholars affiliated with Yeshiva University and the Tikvah Fund, the book conveys how profoundly the Hebrew Bible shaped the way non-Hebrew America understood itself.

Woven into the warp and woof of life in the New World were the tales and teachings of the Old Testament. From William Bradford invoking the 107th Psalm in his account of the Mayflower’s landing, to Southern slaves voicing their ache for freedom in songs about Moses and Egypt, the American experience found its expression again and again in biblical terms.

Especially during the Revolution and its aftermath.

“The American Republic was born to the music of the Hebrew Bible,” write Soloveichik et al. It became a common theme during the American founding that “the Israelites’ story was the American story.”

Writing to his wife Abigail in August 1776, John Adams remarked that he, Benjamin Franklin, and Thomas Jefferson had been named to a committee to fashion a “great seal” for the new nation. He described to Abigail the designs Franklin and Jefferson had come up with:

“Dr. F. proposes a device for a seal: Moses lifting up his wand, and dividing the Red Sea, and Pharaoh in his chariot overwhelmed with the waters. This motto: ‘Rebellion to tyrants is obedience to God.’ Mr. Jefferson proposed, The children of Israel in the wilderness, led by a cloud by day, and a pillar of fire by night….”

There was no need for Adams to explain that those scenes were taken from the 13th and 14th chapters of Exodus. By then, the identification of America with ancient Israel — a nation beloved by God, who had liberated it from bondage — was a familiar trope. It wasn’t only clergymen like Samuel Langdon, Ezra Stiles, and John Witherspoon (the presidents, respectively, of Harvard, Yale, and Princeton) who discussed revolutionary politics in biblical terms. As Adams’s letter indicates, even two of the least religious men in the Continental Congress — Franklin and Jefferson — regarded Hebrew scripture as manifestly relevant to American affairs.

Still more striking is the example of what was arguably the most compelling revolutionary polemicof them all — Thomas Paine’s runaway bestseller, “Common Sense.” Published in January 1776, it was a blistering attack not only on the king, but on the very idea of kingship.

Much of Paine’s pamphlet focuses on two heroes of the Hebrew Bible, the warrior-judge Gideon and the prophet Samuel. He recalls how Gideon refused the people’s invitation to become their king, telling them they should revere no majesty but God. Then Paine recounts the ferocious excoriation of monarchy laid out in the book of Samuel, in which the prophet denounces the Israelites, who wanted to be given a king, “that we may be like all the nations.” Samuel paints a savage portrait of a royal tyrant, hungry for power, money, and conquest, who will so brutally oppress the people “that ye shall cry out in that day because of your king which ye shall have chosen.”

Wrote Paine: “These portions of scripture are direct and positive; they admit of no equivocal construction.” If the Bible is true, he claimed, then the legitimacy of “monarchical government” must be false — and so it was right to rebel against George III. It proved a supremely persuasive argument, palpably shifting public sentiment, which in America had long been enthusiastically royalist. Remarkably, Paine himself was a skeptic who denied that the Bible was divine. Yet his own beliefs didn’t weaken the effectiveness of his case, which appealed deeply to an audience accustomed to seeing itself through a biblical lens.

Americans in the 21st century see themselves differently, of course. Arguments today about geopolitics or the rightful form of government rarely allude to the Old Testament. And yet, Lincoln’s description of America as “the almost-chosen nation” has not quite lost its resonance. The Hebrew Bible indelibly molded the American founding, and its influence remains a part of our national story, muffled but not mute.