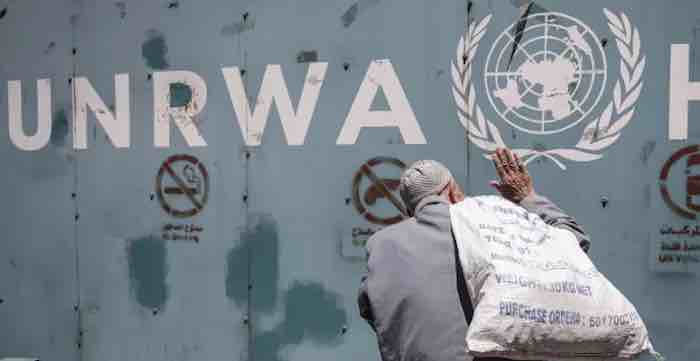 The United Nations General Assembly mandate for the scandal-ridden United Nations Relief and Works Agency for Palestine Refugees in the Near East (UNRWA) is coming up for renewal shortly. The renewal request should be denied. Aside from the financial scandals reaching the very top echelons of UNRWA’s leadership, UNRWA has become no more than a tool serving the Palestinian leadership’s relentless drive to liquidate the Jewish state of Israel.

UNRWA claims that it “has contributed to the welfare and human development of four generations of Palestine refugees,” leading the agency to make insatiable demands for more and more money contributed by gullible donors who do not look behind the curtain. Behind the curtain is a self-perpetuating bureaucracy that keeps the refugee dependency machine alive by endorsing the so-called “right to return” for the millions of Palestinians UNRWA insists on calling “refugees.” It is time to assign this dysfunctional agency to the dustbin of history. Instead, any continued international funding to support further humanitarian aid and basic education for needy Palestinian civilians requires a fundamentally restructured mechanism outside of the control of Hamas and the Palestinian Authority and more accountable to its donors.

UNRWA began modestly enough, with a temporary mandate to help approximately 750,000 Arab refugees from the 1948 war that the neighboring Arab countries started against the newly independent Jewish state of Israel after rejecting the United Nations’ original two-state partition recommendation. Until the late 1950’s, UNRWA properly focused its efforts on reintegration of Palestinian refugees in other host countries willing to receive them. But UNRWA has since become a permanent UN fixture with a definition of “refugee” unique to the Palestinians. A Palestinian “refugee” status applies not only to those originally displaced but to their descendants for generation after generation until there is a “just resolution of the question of the Palestine refugees.” No effort is expended to resettle Palestinians in other countries and support their integration, as is done with refugees from anywhere else in the world, including the hundreds of thousands of Jewish refugees expelled from Arab countries who successfully resettled in Israel. A Palestinian registered as a “refugee” with UNRWA does not even lose the “refugee” status if he or she becomes a full-fledged citizen of another country. Now there are more than 5.5 million descendants and other persons designated as Palestinian “refugees” if they register with UNRWA, including the bulk of the 2 million registered Palestine “refugees” living in Jordan who have full citizenship in Jordan.

What is a “just solution of the question of the Palestine refugees” as far as UNRWA is concerned? Nothing short of the Palestinians’ so-called “right to return” to Israel, even for the millions born many years after the original displacements. Former UNRWA Commissioner-General Peter Hansen described nearly two decades ago the “right to return” as “a principle established in the human rights conventions and agreements that have been adopted and is, according to many international lawyers, now accepted in customary international law.“ Even the creation of a new independent state of Palestine, he believed, would not necessarily end “the refugees’ problem.”

This is not a legal or human rights issue as Hansen and other UNRWA defenders have argued. It is a political issue, revealing UNRWA’s strong anti-Israel bias. James G. Lindsay, a former UNRWA general-counsel, was candid enough to admit more than a decade ago that “UNRWA’s original objective, to repatriate or resettle the refugees, has been changed to one of providing services and protection to them until their preference (i.e., to return to Israel) is realized.” He added that “UNRWA has gradually adopted a distinctive political viewpoint that favors the Palestinian and Arab narrative of events in the Middle East. In particular, it seems to favor the strain of Palestinian political thought espoused by those who are intent on a ‘return’ to the land that is now Israel.”

Nothing has changed during the years since. UNRWA continues to contribute to indoctrinating Palestinian youth with the dogma of the “right to return,” creating generation after generation of Jew-haters. In 2013, for example, UNRWA chose as its first Regional Youth Ambassador for Palestine Refugees and Goodwill Ambassador for Peace the Arab Idol winner Mohammed Assaf, who sings about martyrdom against Israeli “occupation” and appears in videos displaying Palestinian weapons. Assaf is a Palestine refugee from the Gaza Strip who attended an UNRWA school.

“As a ‘child of UNRWA,’ Mohammed Assaf is the ideal individual to be our Agency’s first ever Regional Youth Ambassador,” UNRWA said on its website. In July 2014, this “child of UNRWA” and “Goodwill Ambassador for Peace” released a song of solidarity against Israel which included the lyrics, “Take my blood and give me freedom, My land is from river to sea.” In another song, Assaf intoned a hymn about “going home” to “my beautiful country” Palestine, including the Israeli cities of Safad, Acre, Tiberias and Haifa:

“Oh you bird going home
My eyes will watch over you and May God protect you
Oh you traveler, you make me jealous
Palestine is my beautiful country
Go to Safad and Tiberias
Send my love to Acre and Haifa”

The “child of UNRWA” instilled in Palestinian youth with his songs the uncompromising dogma of “right to return.” This dogma is reinforced in UNRWA school textbooks and teaching guides. Dr. Arnon Groiss, an expert who for years has examined Palestinian schoolbooks that are used in UNRWA schools, concluded that the newer school materials published in 2017-2018 “emphasize that the return of the descendants of the 1948 refugees will take place not to Israel, but to liberated Palestine.”

Palestinian Human Rights Advocate Bassem Eid, who spent the first 33 years of his life in a Palestinian refugee camp, has devoted substantial time to researching UNRWA’s policies. “I have been saying for years that UNRWA has become part of the problem and not part of the solution,” Mr. Eid said in 2018. He reiterated that opinion in remarks he delivered to UN correspondents in New York on Thursday.

UNRWA is presently engulfed in a corruption scandal at its highest levels. Pierre Krahenbuhl, UNRWA’s current commissioner general, is under investigation himself for alleged financial irregularities and abuses of authority. The fact that Krahenbuhl has not even been suspended pending the conclusion of the UN’s internal investigation is yet one more example of the moral bankruptcy of this agency. But that is merely the tip of the iceberg. UNRWA seeks to perpetuate itself with manipulation, deception, and indoctrination of successive generations of so-called “refugees” based on a manufactured “right to return” to a land that does not belong to them. When UNRWA’s mandate comes up for renewal later this year, the door should finally be closed. It is time to dismantle UNRWA once and all and start fresh with a workable and accountable model.