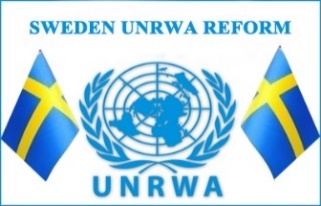 UNRWA REFORM: SWEDEN (pending) has registered as a non-profit organization  with the Swedish government, with a Swedish language website:

After the registration process is completed, UNRWA REFORM: SWEDEN will ask for private local and international membership fees to launch its work.

no funds accepted from any government.