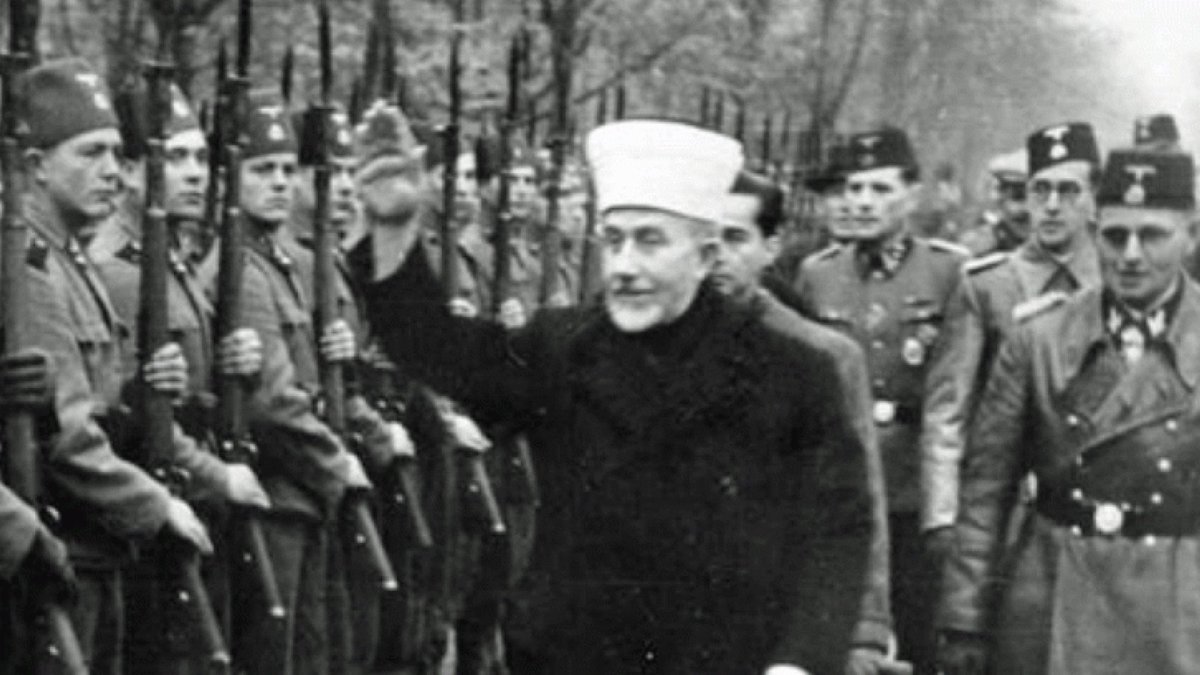 EXECUTIVE SUMMARY: A recent study recounts the purportedly unknown story of Palestinian Arab volunteers fighting the Nazis during WWII. Haaretz used this finding as an opportunity to mock PM Benjamin Netanyahu, who has pointed out that the Mufti of Jerusalem was a close ally of Hitler. Yet the Mufti’s position as “the most important Arab Quisling” is indisputable, while most of the study’s conclusions are dubious and inconsistent with historical facts.

Israel’s Declaration of Independence notes the historic role played by Palestinian-Jewish volunteers to the British Army during WWII:

In WWII the Jewish Community of this country contributed its full share to the struggle of the freedom- and peace-loving nations against the forces of Nazi wickedness and, by the blood of its soldiers and its war effort, gained the right to be reckoned among the peoples who founded the United Nations.

It is hardly surprising that upon the British declaration of war on Nazi Germany, the Jewish Agency Executive and Vaad Leumi (National Council) rallied to the Allied standard. The two Jewish organizations jointly announced that everyone in the Yishuv (the Jewish community in Mandatory Palestine) between the ages of 18 and 50 should aid the British army. Within the first week of the war, more than 130,000 members of the Yishuv had volunteered to join the British army.

This enthusiastic response was in spite of the May 1939 British White Paper, which reneged on London’s obligation under the 1922 League of Nations mandate to facilitate the establishment of a Jewish national home in Palestine in line with the 1917 Balfour Declaration and instead envisaged a unitary state in Palestine in which Jews would be reduced to a position of permanent minority. David Ben-Gurion, the head of the Jewish Agency, hoped simultaneously to reassure both the Yishuv and the Mandate government by stating, with Solomonic nuance, “We will fight the White Paper as if there is no war, and fight the war as if there is no White Paper.”

Israeli professor Mustafa Abbasi views that history differently. In April 2019, he published an article (in Hebrew) titled “Palestinians fighting Against Nazis: The Story of Palestinian Volunteers in the Second World War” (Cathedra Quarterly). In the words of the article’s abstract:

During WWII about 12,000 Palestinian Arabs volunteered to serve in the British army. These volunteers participated actively in battles in North Africa and Europe. Many of them lost their lives, others were wounded, and many are still missing. It is interesting that despite this vital contribution of the Palestinian people and their leadership in the war against the Nazis, especially among the opposition parties, the attention of historians has been mostly directed toward the meeting held between the Mufti of Jerusalem and Hitler.

Taking this claim for granted, the Israeli leftist daily Haaretz seized the opportunity to ridicule PM Benjamin Netanyahu’s 2015 assertion that the Mufti had urged Hitler to annihilate the Jews. In the wake of the criticism this statement had elicited, Netanyahu said his intention was not to absolve Hitler of culpability for the Holocaust but to note that “the Mufti played an important role in the Final Solution.”

This clarification is right on target. The Mufti’s contribution to the Nazi war effort was infinitely greater than his above-noted meeting with Hitler, in which he offered the formation of an Arab legion to fight on Germany’s side and the Nazi tyrant promised to destroy “the Jewish element residing in the Arab sphere under the protection of British power [i.e., the Yishuv]” with the Palestinian Arabs given an active role in this genocide. The Mufti’s contribution ranged from his involvement in the 1941 pro-Nazi military coup in Iraq, to his wartime broadcasting of Nazi propaganda to the Arab and Muslim worlds, to his recruitment of a Muslim SS division that fought on the Russian front, to his repeated incitement of Heinrich Himmler, Hitler’s murderous henchman with whom he established a close personal relationship, to exterminate European Jewry. So deep was Hajj Amin Husseini’s involvement with the Nazis that a contemporary British intelligence report described him as the “most important Arab Quisling” (after the infamous Norwegian Nazi collaborator).

This massive support for the Nazi war effort by the leader of the Palestinian Arabs, for which he narrowly escaped postwar prosecution by the Allies, overshadows the thousands of (mainly opposition) Palestinian Arabs who defied their leader and took up arms against the Nazis—often shoulder to shoulder with the much more numerous young Jews from Mandatory Palestine who did so. This contribution to the British war effort needs to be acknowledged, but the full context must be provided so as to prevent its use for misrepresenting the historical record.

Nor was Abbasi the first to have uncovered this episode. An English version of the same research material was published almost two years earlier, in London’s War and History magazine (November 2017), only to attract little attention. This may be related to the timing of its publication: it appeared on the centennial anniversary of the Balfour Declaration, and proof that the Palestinian Arabs sided with Britain during WWII could have weakened PA President Mahmoud Abbas’s disparagement of the declaration and demand for an official apology from the British government.

Notwithstanding Abbasi’s claim to have based his research on a variety of primary and secondary sources, he seems to have chosen his sources selectively, presumably to service the theory of a significant degree of Palestinian Arab resistance to the Nazis. Neither the quantitative nor the qualitative aspect of this theory is supported by the evidence.

Gen. Archibald Wavell, commander of the British forces in the Middle East, opposed the formation of a Jewish regiment in the British army. According to historian Marcel Roubicek, the British High Commissioner for Palestine also feared that Jewish enlistment would inflame Arab anger. To solve that problem, he made it a condition that Jews wishing to join up find an equivalent number of Palestinian Arab volunteers to join up as well.

To accomplish this, the Jews of the Yishuv offered financial compensation to Palestinian Arabs to enlist. They ultimately succeeded in raising enough manpower from both communities to permit the formation of a Jewish regiment.

The opportunity for Palestinian Arabs to join the ranks of the British Army was thus a direct outcome of the Jewish desire to render its utmost assistance to Britain in every sphere of war activity, a point Abbasi ignores.

He is similarly fuzzy on Palestinian Arab motivation. He states, “Most of the [Palestinian Arab] volunteers were villagers and of the urban lower class, and…the economic motive played a central role in volunteering,” noting that these “motives…differed from [that of] their Jewish friends, who enlisted in the army mainly because of opposition to Nazi Germany and its racial policy toward their people, besides other motives such as the revival of a Jewish army, and the serious employment situation in the country at the beginning of the war.”

Compensation as the prevailing motivation for Palestinian Arab enlistment is supported by the evidence, but Abbasi claims their motives were in fact manifold and varied. Some Palestinian Arabs, he states, enlisted for ideological reasons, to express their opposition to Nazi ideology and loyalty to the British and their values. This motive was especially true of the urban elite and the intellectuals, he alleges, who were highly influenced by British education and culture. He does not substantiate this point sufficiently and ignores available evidence documenting contemporary Palestinian contempt for the British Army (see, for example, Prof. Kimberly Katz’s A Young Palestinian’s Diary 1941-1945, The Life of Sami Amr).

Abbasi laments that “there is hardly any reference to the thousands of Palestinian volunteers, some of whom fell in battle, while others are still listed as missing in action, and no commemoration of the fallen can be found anywhere.” He suggests this “evil” is explained by “what the Palestinian people experienced during the Nakba and its aftermath, the destruction of archives and records in addition to the loss of personal documents, and the fact that no organization was established to commemorate the volunteers and their deeds.” He thus accuses Israel of covering up the Palestinian Arab role in defeating the Nazis.

It should be noted that Abbasi persistently uses the term “Palestinians” rather than “Palestinian Arabs” in his article, starting with the title. This manipulation services the popular narrative denying any linkage between the Jewish People and Palestine. In her book World War II – The Story of a Jewish Soldier, Jewish Women of Mandatory Palestine Serving in the British Army, Esther Herlitz (later an Israeli diplomat and politician who served as a member of the Knesset) wrote, “As far as the British were concerned, we from the Jewish Yishuv, and some Arabs, were Palestinians.”

Academic research needs to be cautious and precise, particularly when the audience is not in a position to either challenge or verify its conclusions. Abbasi’s contribution to the study of the Israeli-Palestinian conflict, which is one of the most contentious topics in the world, is an attempt to implant a “corrective” history and characterize the Palestinian Arabs as “good guys” who fought the Nazis rather than allying with Hitler.

The actual contribution, according to facts and evidence, of Palestinian Arab volunteers during WWII was marginal. In the early war years, the Axis countries appeared to be on the road to victory and a Nazi victory was perceived by many Arab leaders as an opportunity to achieve their aspirations—and none more so than the Mufti. In his prolonged and extensive interaction with the Nazi leadership, from its rise to power in 1933 to its downfall in 1945, he demanded not Palestinian-Arab independence but the creation of a vast Arab state, or rather empire, presumably headed by himself.