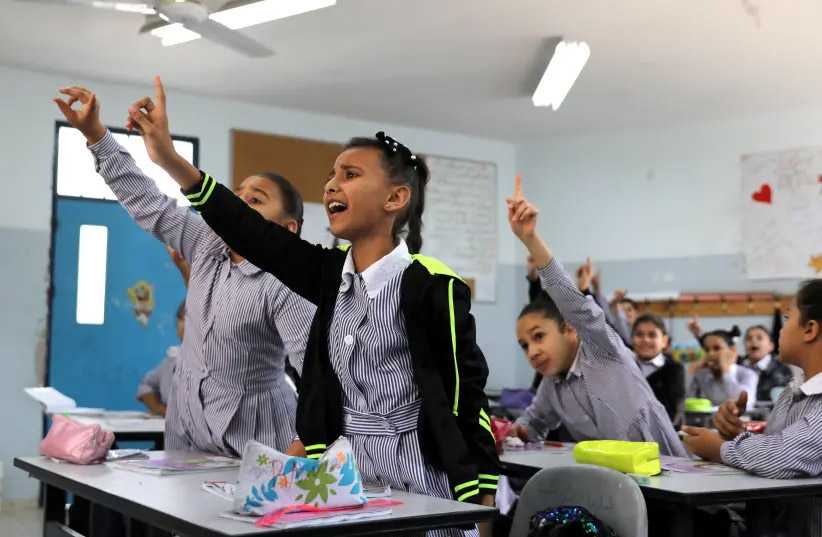 It is a foregone conclusion that the UN General Assembly will vote today, Friday, December 13th, to renew the United Nations Relief and Works Agency for Palestine Refugees in the Near East (UNRWA) mandate, which will once again be expected to continue a policy of confining descendants of Arab refugees from the 1948 war to yet another three years of “temporary” refugee perpetuity.

Here are conditions that reflect UN values, which must be applied by UNRWA, but only if UNRWA donors demand it.

The new curriculum, taken by UNRWA from the Palestine Liberation Organization and its PA Ministry of Education, incorporates principles of Jihad, martyrdom and “right of return” by force of arms, in UN schools that are supposed to promote the UNRWA slogan of “Peace Starts Here.” The path to peace begins in the classroom – but not in schools where Palestinian children are taught that they must fight Israel to control all the land from the Jordan River to the sea. New PA/UNRWA texts that we have reviewed declare that all Jews currently living in the state of Israel must be exterminated.

UNRWA should demonstrate a commitment to UN principles for “peace education”; training of child soldiers is in flagrant violation of UN principles and international law. Our agency has filmed and documented that training and posted these movies on our site, IsraelBehindTheNews.com.

3. Insist that UNRWA dismiss employees affiliated and endorsed by Hamas

Laws on the books in all most Western nations forbid their governments to aid to any entity which employs members of a terrorist organization.

All donor funds that flow to UNRWA must be audited. Since the UN itself does not provide direct funds, with monies flowing from 67 donor nations, there is no evidence of a serious audit going on. An upgraded audit would address widespread reports of wasted resources, duplication of services and undesired flow of cash to Gaza-based terrorist groups, which gained control over UNRWA operations in Gaza over the past 18 years.

This would finally advance the resettlement of Arab refugees in decent, permanent conditions, after 70 years of stagnation. Current UNRWA policy is that resettlement would interfere with the “right of return” to Arab villages that existed before 1948 – so no UNRWA attempt is now made at resettlement. According to UNRWA, refugee status is inherited and Palestinian refugees now number about five million. The UNRWA website now says seven million. UNHCR, the one refugee agency dealing with millions of refugees in the world except for Palestinian Arabs, does not promote inherited status so all that other refugees in the world are resettled with relative efficiency. UNHCR remains a model for UNRWA.

UNRWA Mandate renewal could spark a new beginning for those who live in UNRWA facilities. If such conditions are introduced into UNRWA’s ongoing operations, the next generation will not be indoctrinated to revere violence, Jihad and martyrdom, all in the name of the “right of return” to villages which existed before 1948.

Only then can efforts to negotiate Middle East peace stand a chance.

The time has come to give feedback to each UN ambassador from the major donor nations that contribute $1.2 billion each year to UNRWA. Lists of UNRWA donor nations are featured on the UNRWA web site. Names of current UN ambassadors from each nation appear on the web site of the UNCA, The UN Correspondents Association.

The writer is director of the Israel Resource News Agency at the Center for Near East Policy Research, and the author of UNRWA: Roadblock to Peace (2014).