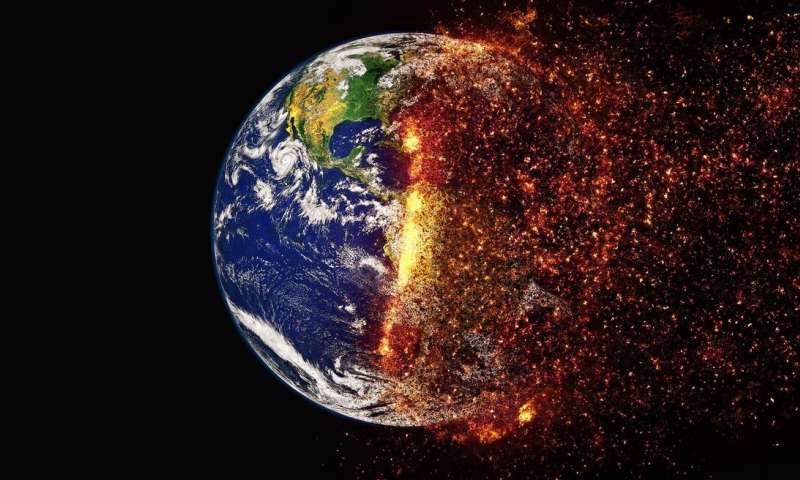 The subject of climate change is one which is guaranteed to generate plenty of heat regardless of whether one is a sceptic or a believer.

As we transition from 2019 to 2020 in the civil calendar there is as far as Jews are concerned both a definite chill and a rising heat in the air. I am not referring to the meteorological climate but to the increasingly toxic pollution of Judeophobia which the new year is ushering in on a vast swathe of the globe.

Like climate fluctuations this hatred of Jews has been around for an eternity, waxing and waning over the millennia. Just as there are myriad explanations as to why the planet is getting colder or hotter so the debate as to why the virus of Jew-hate exists persists and mutates, also rages. There are those who blame the victims for their own misfortunes and conveniently point the finger at Israel as the origin of all evil. Others deny there is a problem at all and that the whole situation is overblown. The majority realize that the malodorous fumes of hate are once again increasing but cannot agree on how best to combat this threat.

Do we assimilate and try to disappear below the landscape? Do we remain silent and place our trust in others to protect us? Do we become proactive and take effective steps to protect ourselves and our communities? Do we finally come to the conclusion that living openly as proud Jews in places where hate abounds and where we are powerless to prevent its spread, is futile? Do we make a decision to leave those countries and relocate to the Jewish homeland where at least we can help to fight back? Are we so seduced by our materialistic mirages that we prefer to stay put?

There are of course no simple answers and at the end of the day, each person has to make a choice which will ultimately impact them and their children for better or worse. As we enter 2020 it is worth looking ahead and trying to discern what likes in wait.

As far as Israel is concerned we face another year of political chaos unless the electorate and the politicians can somehow get their act together. One would hope that come March there will be such a revulsion at the selfish and ego-driven behaviour of our politicians that the voters will finally deliver a decisive message. Another hope is that the disgraceful charade of Malka Leifer evading extradition will finally end. Security-wise our biggest threat remains Iran and its malign support for groups dedicated to our demise. We need to speak up and expose those groups which fund and facilitate BDS.

Our mythical peace partners have discovered that repeating historical revisionist lies and using international organizations to condemn and sanction Israel works very well. Therefore 2020 is the long-overdue time when an unapologetic Israeli Government needs to tell the UN, UN Human Rights Council and the International Criminal Court that we will no longer play ball with their hypocritical carry-on.

In the next twelve months, some hard decisions will be required in order to make clear that Israel will not tolerate continued interference by EU funded groups in our internal affairs. In addition, the time is long overdue for allowing freedom of Jewish worship on the Temple Mount and making sure that neither Jordan nor Turkey meddles in our backyard.

There are plenty of other dramas sure to surface in 2020 and therefore Israel must have a coherent and strong coalition to confront dangers on a multitude of fronts.

What does 2020 hold for Jews outside of Israel?

A realistic prognosis should set off warning bells. Apart from the challenges of strengthening identity and affiliation the inescapable inevitability of a rising tsunami of anti-Jewish/Israel convulsions looms large. The climate is definitely taking a turn for the worse. Even in countries which hitherto perhaps were somewhat immune to Judeophobia, there has been an increase in such incidents. This past year of 2019 showed a dramatic rise in verbal and physical violence against Jews as well as damage to communal buildings. Statistics for such benign countries as Australia, the United Kingdom and the USA have shown greatly increased hate events and the predictions for 2020 are not encouraging. While authorities generally speak out and try to reassure the sad fact is that nothing will help. This virus survives and mutates even in places where the Jewish population is minuscule.

The USA is witnessing an upsurge in Jew/Israel hatred and the 2020 election campaign will only accelerate this. Rather belatedly many but not enough American Jews are slowly waking up to the reality that danger is upon them. Likewise, British Jews still face threats from both the left and right. Europe, South America and Scandinavia are already a lost cause. Who could have imagined that as we enter 2020 Jews living in so-called “enlightened” countries would be intimidated into hiding their identity in public? In a rerun of 1930’s Europe, the wearing of kippot and stars of David is now considered too dangerous. Synagogues, schools and communal buildings have been transformed into armed fortresses.

What is the solution?

The stark reality is that no simple cure exists. In order to prevent this tsunami of hate from overwhelming us all, a combination of measures needs to be urgently deployed. These include tighter legislation banning hate incitement and acts; more serious prosecution of hate perpetrators; upgraded security by law enforcement and community officials alike; training young Jews to defend themselves and others; making Holocaust studies a compulsory part of the educational curriculum; adopting the definition of Jew-hatred as defined by the International Holocaust Remembrance Alliance; tackling abuses of “free speech” at universities and in the media; exposing BDS for the hypocrisy it is; following up rhetoric with actual action.

The growing number of disaffected and disaffiliated Jews in certain countries adds another dimension to the challenges we face as we enter 2020. Growing into adulthood with zero knowledge or understanding of the centrality of Israel to Jewish life and being divorced from any meaningful involvement in Jewish education and traditions these otherwise highly educated individuals make perfect targets for any and every anti-Zionist group. They are manna from heaven as far as the media is concerned and become willing tools of those whose hatred has already morphed from Jews to the Jewish State. How many have already been duped into donating to groups which spend their entire time delegitimizing Israel? Just look at the list of NGO’s which have run to the ICC in order to condemn and sanction Israel.

To say that this year will be fraught with difficulties and danger is the biggest understatement of the century. The climate is definitely changing and we all need to wake up and make preparations for the deadly squalls ahead.