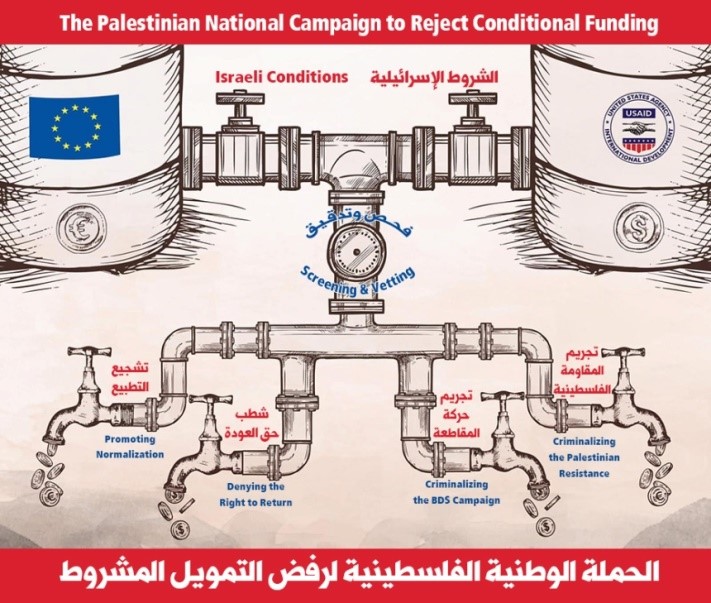 Facebook
Twitter
Pinterest
WhatsApp
In 2019, the EU introduced a new clause in its contracts with Palestinian NGOs, under “General conditions applicable to European Union-financed grant contracts for external actions” (Annex G.2, Annex II, Article 1.5 bis). It stipulates that “Grant beneficiaries and contractors must ensure that there is no detection of subcontractors, natural persons, including participants to workshops and/or trainings and recipients of financial support to third parties, in the lists of EU restrictive measures.” These lists include terrorists and terrorist organizations designated as such by the EU (e.g.  Hamas, Izzedine al-Qassam Brigades, Al-Aqsa Martyrs Brigade, Islamic Jihad, and the Popular Front for the Liberation of Palestine).According to media reports, during a December 20, 2019 meeting with EU officials, representatives from PNGO “refused to sign an EU grant request which stipulates among its criteria that beneficiaries must refuse to transfer any EU aid given to terrorist groups or entities….The organizations in question steadfastly decline to do so, claiming Palestinian terrorist groups are merely ‘political parties.’” The timing of this episode appears to be related to the December 18 announcement of the arrests of several NGO officials in connection with the murder of 17-year old Israeli Rina Schnerb.On December 30, multiple Palestinian NGOs, including PNGO members, launched a “Palestinian National Campaign to Reject Conditional Funding.” The campaign, which rejects the EC’s “conditioned funding” and “so-called anti-terrorism clauses and policies…on preventing terrorism that affect the history and struggle of our people” (emphasis added), justifies the use of violence and claims that the “Palestinian resistance factions are not terrorist organizations,” (see video clip). 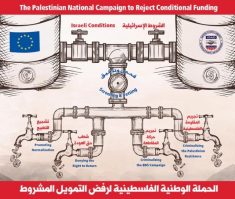 The Palestinian NGO Network (PNGO) is an umbrella framework with 135 NGO members based in Gaza and the West Bank. (PNGO does not publish a list of its members; the information below on the participation of NGOs with links to the PFLP terror group is taken mainly from the NGOs’ websites.)

PNGO enjoys generous funding from the European Union (EU)1 and other international donors for the stated purpose of strengthening, coordinating, and networking among Palestinian civil society. PNGO2 also enjoys permanent representation in the UN’s Humanitarian Country Team, which coordinates all international aid in Gaza and the West Bank. This comes with a seat on the advisory board of the UN’s humanitarian pooled fund, which is designated for emergencies, granting PNGO decision-making power in selecting the fund’s beneficiaries.

This is not the only example of PNGO opposing conditions on funding. It has previously rejected anti-terrorism funding language, defended Palestinian “resistance,” and blocked normalization with Israel and Israelis:

Walid Hanatsheh (Abu Ras) is listed as a PNGO board member on behalf of a PFLP-linked NGO, Health Work Committees (HWC), and is the HWC finance and administration manager.

PNGO describes Ashraf Abu Aram as “a human rights defender and advocacy officer of Palestinian NGO Network (PNGO).” According to a November 2019 statement by PNGO, Abu Aram was arrested by the Israeli security forces (November 7, 2019) and “was transferred under ‘administrative detention for four months.’”

A 2012 report in Haaretz identified Abu Aram as a PFLP member who was arrested for “allegedly planning to kidnap an IDF soldier in order to bring about the release of PFLP leader Ahmed Sa’adat from an Israeli jail.” According to the Israel Security Agency (Shabak), “Abu Aram already contacted a local weapons dealer in an effort to obtain two pistols and an automatic rifle with which to carry out the planned abduction.”

Samer Arbid and Abdel Razeq Farraj, both senior UAWC employees, were arrested in 2019 for their alleged involvement in the August 23, 2019 bombing attack (see above).