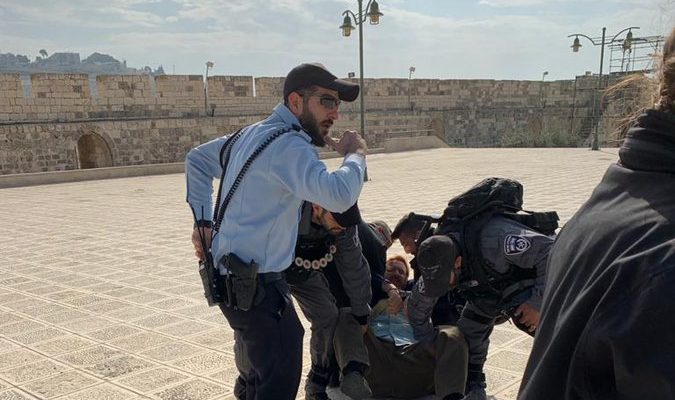 Former MK Yehudah Glick was detained on Tuesday at Judaism’s holiest shrine, the Temple Mount in Jerusalem, apparently over suspicion that he was praying.

Despite the sanctity of the place to the Jewish religion and the fact that Israel maintains sovereignty over the area, where the first and second Temples were located, Jews have been barred from praying there due to a demand imposed by the Waqf Islamic Trust, which administers the site. The Mount is considered Islam’s third-holiest site, after Mecca and Medina.

Reports say that police believed that Glick was “walking too slowly” during his visit, a reference to the suspicion that he might have been pausing for some form of prayer.

vThe former MK, who represented Prime Minister Benjamin Netanyahu’s Likud party in parliament from May 2016 through April 2019, had come to the shrine with U.S. Congressmen Jim Jordan (R-OH) and Mike Johnson (R-LA), according to Avi Abelow, who posted a video of the visit on Facebook.

However, police said in a statement that Glick “came back on his own” after the earlier visit “and entered the Temple Mount without coordinating with police, which is against the rules.”

A group called Students for the Temple Mount charged that it was a “disgrace” that a former member of the Knesset, who had just accompanied members of the U.S. Congress, had been detained and placed in handcuffs.

Glick is a longtime Temple Mount activist. He has stressed dialogue between Muslims and Jews on the Mount.

In October 2014, he was shot multiple times in the chest at close range by an Arab terrorist outside the Begin Heritage Center in Jerusalem but miraculously survived.

“A state of affairs whereby, under Israeli sovereignty, Jews cannot visit the Temple Mount without police supervising their every move is ridiculous and absurd. The policy of persecuting and restricting only Jews directly encourages extreme Muslim elements,” said Sara Beck, a candidate on the Yamina list running in the March 2 Knesset election, in condemning Glick’s detention on Tuesday.