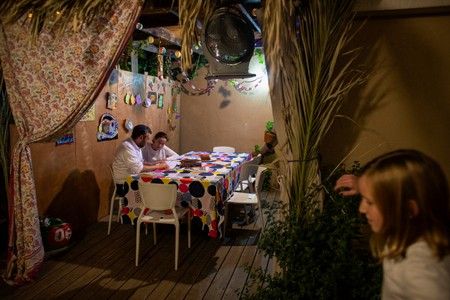 Following the loss and destruction of the Holy Temple in Jerusalem in the year 70 C.E., Rabbis decided the Jewish home should be a Mikdash m’at—a “miniature temple”—a holy space where the Shechina (Gd’s Presence) would dwell.

How does one make a Jewish home?

To be sure, there are signs of vitality in Jewish America:

His travels took him far and wide to many countries. He saw many things that were beautiful, but he was not satisfied. He didn’t find what he was looking for. One day he stopped a bride on her wedding day. “Tell me,” he said to the radiant young girl, “what’s the most beautiful thing in the world?”

“Love,” she answered without hesitation.

The artist went on his way disappointed for he couldn’t paint love. Later he met a soldier returning from war. “Soldier,” he said. “What’s the most beautiful thing in the world?”
“Peace,” the soldier answered as he hurried home.

Again, the artist was disappointed for he couldn’t paint peace. Continuing his search he stopped a Rabbi on the way to shul. Surely, he thought, this holy man would be able to help him. But the Rabbi answered simply, “Faith, my son, is the most beautiful thing in the world.”

But how could one paint a picture of faith? The artist felt his search was hopeless and returned home—weary in body and in soul. Then, when his wife warmly greeted him, he found the love of which the bride had spoken. All about his home was the feeling of security, the tranquil peace that the soldier thought so beautiful. And in the eyes of his young children was the faith described by the Rabbi. Here was the subject for his painting—his family and his home! This would be his masterpiece.

My friends, the Jewish home is unique. The Jewish home you create can be your masterpiece. When you enter it you should see mezuzot on the doorposts, Shabbos candlesticks, a Chanukah menorah. There could be Jewish paintings on the walls along with pictures of Jewish celebrations like weddings and Bar/Bat Mitzvahs. And the Jewish home is not only expressed in things, but in opening our homes for guests, for times of joy and sorrow, and for comfort as Abraham and Sarah did…this is the true definition of a Jewish home. Imagine if we could have a home that if Abraham and Sarah showed up they would say, “Now that’s a Jewish home!”