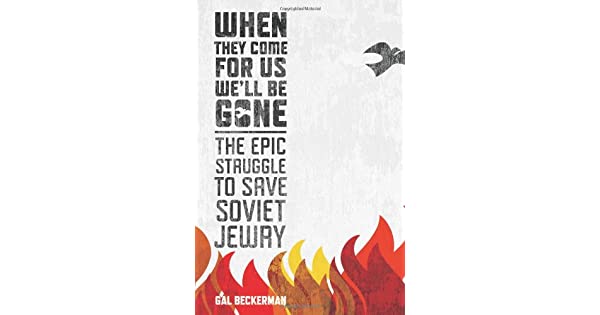 [Comment from David Bedein: A generation has passed which has no clue of the movement to save the Jews of the former Soviet Union. A small group of dedicated Jews faced four factors dead set against their tenacity; The Soviet government, known for its policies of oppression, The US government, which worked towards reconciliation with the USSR, the Jewish establishment, which did not want to make waves, and the Israeli government, where the ruling Labor party feared a challenge to its power base in Israel. Yet the memory of the failure to mobilize support to rescue millions of Jews from the gas chambers a generation before motivated a few dedicated souls to launch what looked like an impossible task, which they succeeded in. This book reviews that monumental struggle, against all odds.] On Passover, we are reminded of the more recent “Let My People Go” in Jewish history — that of the rallying cry of the Zionist activists who defeated the Soviet superpower in the Twentieth Century. Gal Beckerman’s 2010 history of the battle waged in both the former USSR and in the US to rescue Russian Jews is titled “When They Come From Us, We’ll Be Gone; the Epic Struggle To Save Soviet Jewry” and it received much attention when released 10 years ago and still stands today as the most successful book to cover the topic. This is a time of worldwide resurgent violent anti-Semitism and this book’s portrayal of how grassroots Jewish activists and community based organizers joined together to change the landscape of Jewish history is the exact type of inspiration that is needed right now. All who care about the Jewish future would benefit from re-examining Beckerman’s study.

Beckerman is a journalist and not a historian and in his book he departs from the sanitized, establishment view of the fight for freedom and sheds light on many corners of the Soviet Jewry movement that others would have purposely neglected.

Early in his narrative Beckerman singles out the groundbreaking work of the Student Struggle for Soviet Jewry / SSSJ and Yaakov Birnbaum as the catalysts for the American side of the campaign. The lesson that Jewish students with little money and no political power can initiate change by working in a disciplined and smart way is a highly instructive one.

A careful reading of the book leaves one with the fact that activists inspired by the great pre-World War Two Zionist leader Ze’ev Jabotinsky, on both sides of the Iron Curtain. More than that, these activists very often at the forefront of the Soviet Jewry movement in the formative years of the struggle. Unfortunately, Beckerman draws no conclusions from this and he seems mostly oblivious to the fact that adherents of Jabotinsky collectively made a more substantial contribution to the campaign than any other ideological grouping.

The book opens with a look at Yosef Mendelevitch and his fellow Riga based activists. In this section, Beckerman illustrates that it was the older Jabotinsky activists that in the 1960s inculcated in the younger Jews, who were Mendelevitch’s age, a new outlook: “by showing a young person a map of Israel, teaching him a few Hebrew songs, and exposing him to Jabotinsky’s essays, they could alter his sense of himself.”

On Mendelevitch himself Beckerman writes that “The first piece of illegal writing Mendelevitch read, typed and loosely bound with a needle and thread, was a collection of Jabotinsky’s writings.”

In the depiction of the rise of SSSJ Beckerman notes the central role adherents of Jabotinsky played in Birnbaum’s efforts.

This Jabotinsky connection repeats itself in America again and again. Later, when the 1965 creation of the first successful adult activist group, the Cleveland Council on Soviet Anti-Semitism is covered Beckerman relates that “the group found inspiration in…Jabotinsky” but he fails to make any connection to the Riga activists who were also inspired by Jabotinsky four chapters earlier.

Later, when the Jewish Defense League’s part in the story is covered, Beckerman notes that veterans of the Jabotinsky movement made up many of its early leaders and activists. However, again, he does not point out that the decisive commonality in all of these isolated groups and efforts was Jabotinsky.

Who was Jabotinsky? Ze’ev Jabotinsky (1880-1940), is a figure who is too often forgotten today. He was a Zionist leader, orator and writer and he founded the Jewish Legion during World War I, as well as the Haganah self-defense units in Jerusalem in 1920. Prime Minister Benjamin Netanyahu’s father, Benzion, served as Jabotinsky’s personal secretary just after the outbreak of World War II.

What were Jabotinsky’s vital contributions? His words, deeds, and ideas animated a generation of young Jews to resist the Nazis, rescue fellow Jews from Hitler’s forces, and fight for the freedom of Israel as soldiers in the Irgun and the Stern Group/LEHI. Later, the movement for freedom for Soviet Jewry both in the United States and inside the Soviet Union itself was led by Jabotinsky Zionists and this is all interrelated.

Beckerman provides the evidence of the key role Jabotinsky’s devotees played in freeing Soviet Jews but does not present the much needed closing argument. And it was needed. The book is uniquely inspiring to would be young Zionist activists –it’s virtually a handbook for them– but the soul in the story is missing. And that is Jabotinsky’s exclusive brand that is comprised of blend of four ingredients: Jewish pride, street activism, devotion to duty, and unapologetic Zionism.

[Moshe Phillips is national director of Herut North America’s U.S. division. Herut sponsors the “Zionist History Book Of The Month” project and this article is about April’s book. Herut’s website is www.herutna.org ]