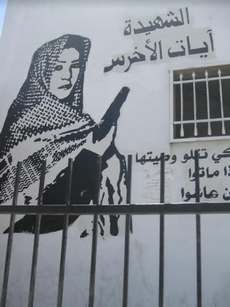 Several years ago, I was asked by an Israeli journalist to go to the UNWRA Palestinian Refuge camp of Deheishe in Bethlehem (under the jurisdiction of the Palestinian Authority) to snap some photos he needed which he would show viewers when he appeared on an Israeli television broadcast. After considering the request, I decided to go.

My first concern was my security. After some thought, I decided to go to the American Colony hotel just inside East Jerusalem not far from the Old City of Jerusalem’s Damascus Gate and take the hotel’s taxi to the refugee camp. The taxi from the hotel says ‘American Colony’ in English on it and since the American Colony is where a lot of journalists who are pro-Palestinian stay, I figured that seeing this taxi driving around the refugee camp would not arouse suspicion or hostility. It would be naturally assumed that I was a journalist who was pro-Palestinian rather than pro-Israel, which would make it safe to snap my photos and then get out of there. I knew I would likely pay more to ride in an American Colony taxi, but it would be well worth it. (As an aside, when I arrived at the American Colony, I saw that in the lobby there were European journalists speaking in English and overhearing their conversation, it was clear to me that they were pro-Palestinian)

Another reason I chose an American Colony Taxi was that any Arab driver working at a hotel such as the American Colony would have to undergo security checks and not likely be a terrorist (or so I thought).

I wore a t-shirt that said Canada and I took off my Chai necklace and wore a wooden cross that I had bought, so that the taxi driver would not suspect I was Jewish.

It did the trick. My driver, having no idea I was Jewish, made numerous negative comments about Jews and Israelis throughout the drive. He spoke of the day which would come when the Jewish settlements built over the green line would become Palestinian. Pointing to the Jewish settlement of Har Homa over the green line just outside Bethlehem, he laughed and said “One day this will become the new Bethlehem.” When he made these remarks I just nodded and touched my cross. He was an older man who was driving a taxi to help provide for his daughter who had five children and whose husband had left her.

Since I was wearing a cross, my Arab driver naturally assumed I wanted to go to Bethlehem to see the Church of the Nativity and other churches. I had to think of a way without raising any suspicion to gently break it to him that I wanted to see a refugee camp, not the churches.

“I’d love to see the churches but first I want to go to Deheishe refugee camp. I’ve never seen an UNWRA refugee camp and have always wanted to. I’d like to see an UNWRA school in the camp. We’ll go to the churches right after that,” I said.

He accepted this answer and drove straight to Deheishe. In Deheishe, I noticed graffiti which said Free Palestine, with a map which included all of Israel, which was on a street near an UNWRA school. Also, in the camp I noticed large murals of terrorists and suicide bombers ,marytrs for the Palestinian cause who died for the cause of liberating all of Palestine. It was easy to sees how the camp was glorifying terror and how a child growing up would want to emulate a terrorist as his or her role model. There were enough murals of terrorists that I had no desire to get out of the safety of the American Colony taxi to take my photos. Instead, I rolled the window down and asked my driver to proceed slowly enabling me to take my photos. The only mural I saw that was not of a terrorist, was of a camel with a city on its hump, which I think was done by graffiti artist Banksy (http://banksyworld.blogspot.ca/) The city ‘s tallest building looked like a mosque. (I wondered if the depiction was supposed to be Jerusalem.)

I then asked my driver to take me to the Aida refugee camp, where I snapped a photo of a large key over the entrance to the camp, symbolizing the Palestinian right of return (showing that Palestinian refugees all wanted to return en masse to pre-1948 homes which no longer existed). This photo I shot was used on the cover of a book by an Israeli journalist.

I then asked my driver to drive to Jericho, telling him that I had already seen the churches of Bethlehem previously. To take the most direct route to Jericho, he said he would have to go through an Israeli checkpoint. “But I know a way to fool the IDF to let me through,” he said. “We’ll make it look like I was taking you to the tourist site of Herodian and we are just on our way back from there. He placed a map of Herodian in my hand, and told me to wave it to the soldier when we got to the checkpoint. We arrived at the checkpoint and he told the soldier that I had just asked him to take me to Herodian and we were on our way back. I waved the map as the soldier looked at me, and the soldier let us through. My Arab driver laughed after we passed the checkpoint, “This trick with the map of Herodian works every time.”

When he displayed great pleasure at having tricked the soldier to letting us use a route we would not have otherwise been able to use, I laughed to myself, that I had in turn tricked him into thinking I was a pro-Palestinian Christian woman. When he began laughing, I nodded and touched my cross.