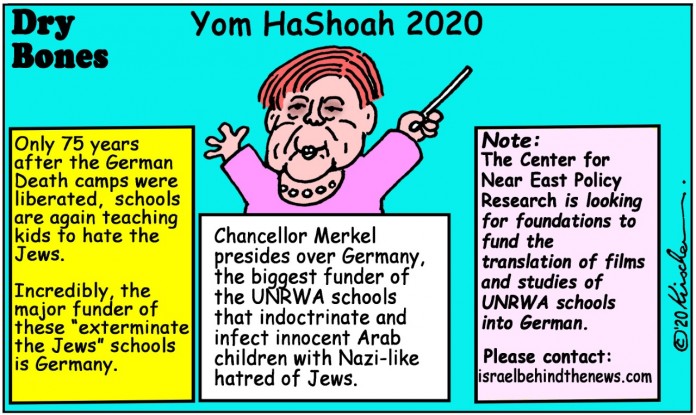 Germany, which presents itself as a democratic power, is now the leading  donor state of the United Nations Relief and Works Agency (UNRWA) which services the  Palestinian refugees of the 1948 was… and their descendants.

Yet 54% of the current UNRWA budget is allocated to an education system which indoctrinates Arab children to make war with  Jews.

As such, Germany shoulders a responsibility to assure the people of Germany and the Jewish people that their money is not channeled in a non-peaceful direction.

All 364 UNRWA have now been examined by three journalists with PhD’s in Islamic Studies.

Schoolbooks are the most revealing source of information regarding the values and aspirations a society would instill in the minds of its youngsters.

Following a protracted state of war, these texts serve as a trustworthy indicator of the existence, or non-existence, of peace education.

The United Nations Relief and Works Agency (UNRWA) for the 1948 Palestinian refugees and their descendants, which has been operating in Jerusalem, West Bank and Gaza (as well as in Jordan, Syria and Lebanon) since 1950, use the PLO books in its schools. UNRWA, as a UN agency, is bound by the UN endorsed principle of resolving all conflict peacefully, as well as by UNESCO principles of peace education [See chart below] As a UN agency, all UN agencies  should treat all member states equally, including the State of Israel

It is imperative  for the German powers that be to know whether the PLO textbooks used in UNRWA schools (as well as in all other schools in Jerusalem,  West Bank and Gaza Strip) advocate  peace or call for an armed struggle, recognize the existence of Israel as a sovereign state in the region and the presence of its six-million Jews  in the country as well as their holy places there, treat Jewish/Israeli individuals as ordinary human beings, renounce terrorist activity against civilians, employ self-criticism in this regard, etc.

We must   return to Germany to make a high profile presentation in Berlin.

The German instigation of the Holocaust commenced in the classroom.

Appendix: UNESCO Principles of Education for Peace and Tolerance