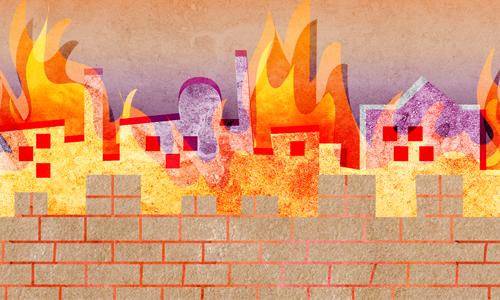 The nine days between Rosh Chodesh Av and Tisha B’Av of the Jewish calendar give us an ideal opportunity for introspection and a reality check on the state of our own lives as well as national aspirations and developments.

For most identifying Jews, the commemoration of the Fast of 9th. Av is associated with the destruction of the First and Second Temples and the exile of Jews from their homeland. Subsequent disasters and persecutions in various lands of dispersion are also a feature of the liturgy on this sad day.

Frequently overlooked, however, is the Biblical origin of this day. Tradition teaches us that it was the sin of the ten spies who reported back to Moses and the Israelites after having scouted out the Promised Land and its inhabitants. It was their extremely negative and morale destroying descriptions of the insurmountable challenges which laid the foundation for a loss of faith and confidence. Notwithstanding the pleas of Joshua and Caleb that they would overcome, the negative and destructive narratives of the majority led to another forty years of wandering in the wilderness before a new generation untainted by inbred Diaspora doubts could finally make their entry to the Land.

This according to our sages was the origin of all future 9 Av calamities. It has a powerful message for all of us today as we battle those who still doubt our ability or legality in living here, those who wish to deny our historical and legal rights and the ever-increasing number of those who hate us for still being around.

The spies who counselled against claiming sovereignty in the territory promised to their forebears still hankered for the life they had left behind in Egypt. Even worse was the fact that they denigrated the Land itself and magnified the strength of the perceived enemies who needed to be conquered. They described the Israelites as grasshoppers in comparison to the “giants” inhabiting it. They rubbished the Land and instilled panic, defeatism and lack of faith amongst masses of people.

Does this not sound rather familiar?

Listen carefully to those today who follow the same shameful path. Claiming that Jewish sovereignty can only be achieved when the messianic age arrives is a distortion of Judaism. Maintaining that the idea of a return to the Land promised to us is somehow criminal because it will upset the rest of the world is a cop-out. Believing that exile and dispersion is a permanent state of affairs and preferable to life in Israel is ignoring history. Preferring the “fleshpots” of the Diaspora instead of being part of a historical miracle is missing a unique opportunity. Denigrating the whole concept of a Jewish State and advocating its collective suicide is identical to those spies who “chickened out” and spread lies and ill-informed rumours.

Just as destructive are those who offer solutions and criticisms from their comfortable suburban Diaspora homes advocating policies which would see the lives of Israelis destroyed. Fantasy plans which ignore reality and promote visions of illusory nirvana if only we would make more suicidal gestures do absolutely nothing in promoting genuine peace. By all means, offer suggestions but do it from the Jewish homeland.

Just as in the days of the Biblical spies we also continue to face nations seeking our demise as a nation and a people. Who needs the Amalekites when we have their descendants trying to undermine us at every opportunity? Then there are “friends” who espouse their love for us and then do everything to undermine us. It reminds me of a quote which sums up the situation very well: “a real friend is one who walks in when the rest of the world walks out.”

Thus the world’s worst colonial occupiers and oppressors feel no shame in condemning us for reclaiming our historical territories. Leaders of nations which have marched in and annexed someone else’s sovereign territory feel fully entitled to lecture us on our “crimes.” Others who are “re-educating” minorities in camps offer material and moral support to countries like Iran which has described Israel as “COVID 1948.”

Other fake friends fund the PA and PLO and encourage them to build illegally on land designated as under Israeli control. They also support hate education in UNRWA schools and turn a blind eye to ongoing Palestinian Arab abuses of human rights. The Dutch Government is currently engaged in prosecuting and fining shops selling wine from Hebron which is labelled from Israel. Sweden, which purports to be a shining beacon of virtue, is banning and confiscating a book that exposes Swedish collaboration with Nazi Germany.

Meanwhile, Poland, a large graveyard of Jewish victims, announces that it will never pay restitution for Jewish properties stolen, confiscated and destroyed during the Nazi and Communist years.

I recently read a report which extolled with great excitement the “potent” rise of the Frankfurt Jewish community and its relevance in modern-day Germany. Digging a bit further I unearthed some more sobering facts. Before the Shoah, there were approximately 30,000 Jews living in Frankfurt. By the time the city was liberated, there were only 100 left. Beneath the euphoria generated by the media there was a sober reminder of just how fragile Jewish existence in Germany (and other European countries) is today. One of the current Jewish residents admitted that “as safe as it may feel, leaving is still something all Jews think about — no matter what generation they’re in.”

“I think even for the third generation, this is true,” she said. “As much as they’ve unpacked the suitcase, they never threw it away, so it’s not such a big deal to pack again.”

“Don’t mix too much. Don’t get too familiar. Don’t feel too rooted. Be on alert. Be always ready not to miss the right moment to leave again,” were just some of the messages she says she learned from her father and others in the community.

Coincidentally an Israeli Arab citizen living in Germany stated: “antisemitism is not back – it is still here and it is getting louder and more aggressive.”

The message couldn’t be clearer.

Jewish independence was destroyed twice because we lost the plot both in our personal interactions and weak corrupt leadership.

Diaspora pogroms, massacres and genocide occurred because we were powerless, landless and leaderless.

If we want to avoid a repetition we need this Tisha B’Av to learn the lessons of history and help turn this day of mourning into one of celebration and joyful fulfilment of prophetic promises.