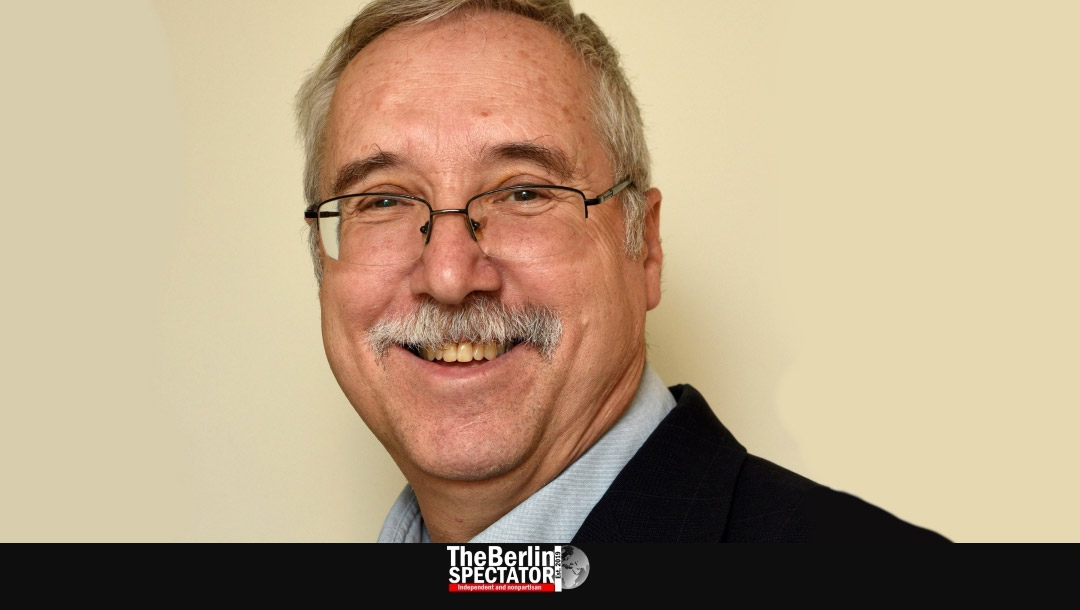 According to Professor Gerald Steinberg, the German government is funding numerous organizations that promote antisemitism. He says the money supply urgently needs to be cut off.

There is a problem with many non-governmental organizations, including some with big names. Amnesty International, Human Rights Watch, JVP and others spread antisemitism, even during the Corona crisis. There are also NGOs which claim they are promoting human rights while they are affiliated with – or infiltrated by – terror organizations.

Gerald M. Steinberg, professor emeritus of political science at Bar Ilan University and President of the Institute for NGO Research in Jerusalem, says Germany is playing a big role in keeping those organizations strong, with a lot of funding.

Imanuel Marcus spoke to him.

The Berlin Spectator: As we have seen in the past weeks, not even a global Coronavirus crisis seems to be stopping antisemitism. How creative are haters today? Is blaming “the Jews” for spreading a virus a new idea?

Prof. Gerald M. Steinberg: The Jewish people and Israel are the ultimate “other”, and the Corona virus is another excuse for suspicion, conspiracy theories and hate from both extremes of the ideological spectrum – left and right. What is particularly disturbing, in this context, is the readiness of governments that claim to oppose antisemitism to turn a blind eye when the haters come from “civil society” on the left, and avow to promote human rights, democracy, or even public health. Many groups that blame Israel for Gaza’s health disaster, for example, or are affiliated with Palestinian terror groups, continue to be funded by the U.N. and the E.U.. This is inexcusable.

The Berlin Spectator: In Germany, antisemites seem to be frustrated about the fact that they cannot bully Jews at cultural events or trade fairs anymore, because none are taking place. They are now disrupting online meetings. A few days ago, they managed to get into an online memorial event organized by the Israeli Embassy in Berlin, with Holocaust survivor Tswi Herschel. They posted photos of Hitler and antisemitic slurs. How is the Corona crisis changing the way antisemitism is being spread?

Prof. Gerald M. Steinberg: Throughout history, antisemites have used whatever means and technologies were available. When social media became popular – in the form of Facebook and Twitter – the hate moved into these platforms. So it is not surprising that, in the era of lockdowns and quarantines, they are “zoombombing” events such as Holocaust memorial ceremonies held by Israeli embassies and Jewish organizations. And the German political elites that participate in more civilized demonization of Israel, including among the political foundations, are not helping.

The Berlin Spectator: Many organizations spread antisemitic content all the time, including one called ‘Jewish Voice for Peace’ (JVP). But what they have been sending out during this crisis defies description. They are accusing Israel of being responsible for the Corona situation in Gaza and of not helping, even though Israel and the Palestinian leadership agreed to cooperate in the fight against Corona. How can the JVP get away with the untruths it spreads?

Prof. Gerald M. Steinberg: Having an NGO like JVP that appears to be Jewish and can “testify” to the accuracy of the accusations against Jews and Israel is an age-old tactic. When these supposedly Jewish groups claim that Israel is evil and commits war crimes, and the Palestinians are all innocent victims, the lies are easier to sell in polite society. Church groups such as the World Council of Churches that promote antisemitic demonization, and BDS, often use groups like JVP to whitewash the hate. In reality, JVP consists of a handful of fringe radicals – some Jewish, some not – who get a great deal of money from non-Jewish sources that are fundamentally anti-Israel, such as Stephen Heintz, the head of the Rockefeller Foundation in the U.S.. With this money, JVP hires public relations specialists and campus organizers to expand its influence, and its role in demonizing Israel. Unfortunately, a number of journalists and government officials are fooled by this facade.

The Berlin Spectator: As it turns out, even large and well-known NGOs such as Amnesty International (A.I.) are singling out Israel during the Corona crisis. According to A.I., Israel is suddenly responsible for the wellbeing of all Gazans, 15 years after the country pulled out of there, and in spite of all attacks against Israel that originated from the Gaza strip. A.I. even denies Hamas uses aid money for its terror infrastructure. Something must be very wrong in that organization. What is it?

Prof. Gerald M. Steinberg: In the past 20 years, Amnesty International has been taken over by radical and, in some cases, corrupt activists. The myths that blame Israel, including in the case of Gaza, are part of this organization’s facade. In the U.S., Amnesty has largely disappeared as former members have become disgusted, and officials with a sense of morality have resigned in protest. Unfortunately, in Europe, including Germany, the facade of human rights that this organization exploits to raise money and promote itself remains unquestioned.

The Berlin Spectator: You are an expert on NGOs that do not really live up to their names or official programs. Your own ‘NGO Monitor’ looks into their activities. Human Rights Watch (HRW) is such a case. Do they actually watch human rights, as their name suggests?

Prof. Gerald M. Steinberg: Human Rights Watch was founded in 1978 by the late Robert Bernstein under the name Helsinki Watch, with the explicit objective of promoting human rights in closed societies, like the Soviet Union. However, beginning in the 1990s, under the direction of Kenneth Roth, HRW lost its moral compass, as Bernstein wrote. Roth and his organization are widely known as obsessive anti-Israeli campaigners, particularly in the United Nations and the International Criminal Court. They were also among the founders of the BDS movement, beginning in the infamous 2001 UN Durban conference’s NGO Forum.

Unfortunately, Roth and HRW have developed a loyal and immoral group of supporters in Germany, where they also raise substantial funds in gala dinners with celebrities. As a result, the demonization of Israel spread by this organization has gained even greater impact among German elites. In 2019, during HRW’s intensive demonization campaign which involved BDS and was led by Roth and Omar Shakir, Germany’s Ambassador to Israel, Susanne Wasum-Rainer, strongly and publicly supported Roth and HRW. This was a major insult to Israelis.

The Berlin Spectator: In Berlin, the BDS movement is big, even though the Bundestag finally labeled it as what it is. They say they reject terror, but co-promote events with Palestinian terrorists like Rasmea Odeh. And they target anything related to with Israel, even at trade fairs and cultural events. What is the best reaction to their propaganda and hatred?

Prof. Gerald M. Steinberg: The Bundestag decision which recognized BDS as antisemitic, as stated in the IHRA wording definition, was important, but it is being ignored by the government. Millions of Euro are still provided to many BDS groups, channeled through GIZ (‘Deutsche Gesellschaft für Internationale Zusammenarbeit’), the Ministry for Economic Cooperation and Development, the Foreign Ministry in Berlin, government-funded church organizations, political foundations, and independent development NGOs, as documented by NGO Monitor. Much of this funding is provided by the German government without transparency, making it impossible for anyone, including the Bundestag, to conduct democratic oversight. So the first stage in countering BDS campaigns in Germany is to end the flow of all of this money.

The second dimension is to recognize the deep involvement of terror organizations in the Palestinian NGO network that operates in Germany and also gets funding. Until this issue is taken seriously by Germans, the antisemitism and anti-Israel campaigns, including BDS, will continue.

The Berlin Spectator: Now there is trouble at the International Criminal Court in The Hague. Palestinian organizations are trying to hurt Israel there with false claims. How is Israel countering those attempts to discredit it?

Prof. Gerald M. Steinberg: “Lawfare” – which uses the ICC in particular to demonize Israel – is closely related to BDS. Both were launched at the infamous NGO Forum of the 2001 U.N. Durban anti-racism conference. Radical groups like Human Rights Watch and Amnesty International, and their Palestinian allies, like Al Haq, promote both causes simultaneously.

The Israeli strategy is based on arguing that the ICC prosecutor has no jurisdiction since Israel is not a signatory and the Palestinians do not qualify as a “state party”. In addition to the U.S., a number of countries, including Germany, the U.K. and Canada, agree with the Israeli position. If the Europeans would threaten to end funding for the ICC and for the NGOs leading this campaign, this would make a difference. Unfortunately, at least in Germany, such clear policies appear unlikely.

The Berlin Spectator: For a long time, Israel has been attacked by terrorists and armies. The country’s enemies also use diplomatic and economical warfare. Now, around its 72nd birthday, the country seems to be hurting itself too. Prime Minister Benjamin Netanyahu will be indicted. What are the implications of this saga? What kind of damage do you expect here? Are Israel-haters and other antisemites rejoicing?

Prof. Gerald M. Steinberg: This situation is disturbing on a number of levels, but perhaps less than it appears from the outside. Prime Minister Netanyahu is generally given credit, even by many of his opponents, for steering Israel through the first stages of the Corona crisis with great success. The charges and evidence against him are seen by many as politically inspired, and there is a distinct possibility that he will be found not guilty. The new unity government with the Israeli Armed Forces’ former Chief of Staff Benny Gantz and his group of new Knesset members creates a mechanism for a successful transition to a post-Netanyahu leadership. So overall, while I agree that the instability related to the indictments is not good for Israel, the damage has been contained, at least so far.

And regarding Israel-haters and antisemites, in their different forms, they will always find excuses to promote their agendas.